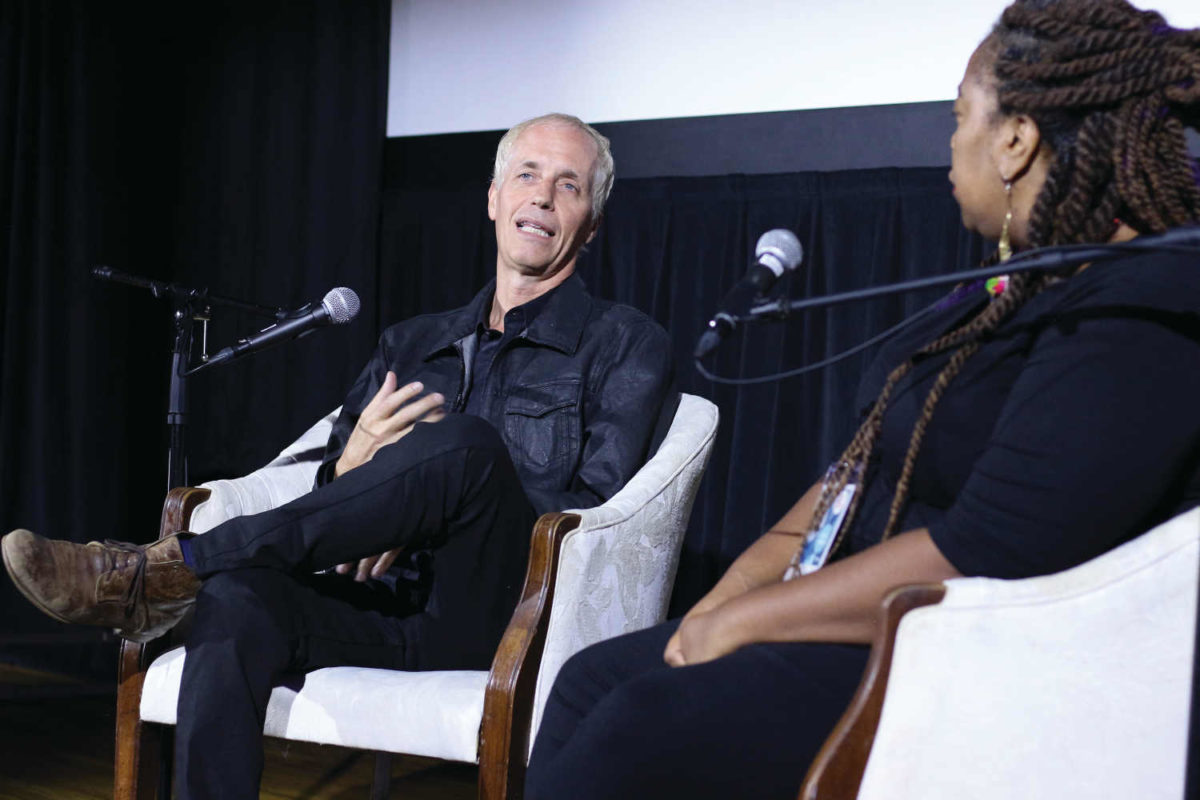 The New Orleans Film Festival recently made a splash in New Orleans with its 28th installment, featuring a slate of original and provocative films. In addition to narrative feature films, documentary feature films and short films, the festival welcomed a number of Spotlight Films (those that were fresh off the heels at top-tier film festivals and coming from prestigious indie distributors). One of those Spotlight Films was Roman J. Israel, Esq., a moving film by Oscar-nominated screenwriter and director Dan Gilroy that had only just played at the Toronto Film Festival for its first screening. Denzel Washington stars as Roman Israel, a driven, idealistic defense attorney who, through a tumultuous series of events, finds himself in a crisis that leads to extreme action.

“I wrote this script on spec, and I wasn’t going to do it if Denzel didn’t sign on,” Gilroy says. “I was going to shelve it, and, luckily, he agreed, and he’s been a close collaborator from day one — from the music choices, to some of the editing, to a lot of the costuming choices. The creative input he had was tremendous. The film couldn’t and wouldn’t have been made without him.”

One pivotal scene in the film comes when Roman is having dinner with a friend and civil rights activist, Maya Alston (played by Carmen Ejogo). “At that point, Roman has sort of lost his way,” Gilroy says. People say, ‘Oh, Roman sold out,’ but he hasn’t sold out — he’s just broken, because that’s what happens to people when the weight of the world on their shoulders becomes too much, they break. And this is the point when he starts clawing his way back.”

All in all, this is a film about forgotten heroes — those selfless people in the world who make contributions to society. “I want [viewers] to understand that no one contribution is too small, and we’re at a great time in history to stand up, find a cause to support and be the change we want to see in the world.”


Creative Cuisine: A new gallery on Royal Street offers a delectable collision of food and art.

“My team and I explored many cities to determine where to open the second gallery, but it was quickly evident that New Orleans was the right place,” Myhrvold says. “With its distinctive culture and history, combined with a vibrant art and food scene, we knew we had to be on Royal Street in the heart of the French Quarter. The energy and creativity of New Orleans is unmatched and we couldn’t be more excited to be part of the city’s artistic heritage.”

According to Myhrvold, he has had a passion for science, cooking and photography since he was a child. And as an adult, he spent a postdoctoral period with Stephen Hawking, and had a career alongside Bill Gates at Microsoft, which ultimately allowed him to pursue several lifelong passions that he had as a child.

“One of the things that connects us with food is how it reinforces our culture,” he says. “We’re always on the hunt for charismatic foods from all corners of the world. It could be the case that these photographs will expose some gallery visitors to ingredients they’ve never seen before, which is also very exciting.”

So might we expect to see any NOLA-centric food photography in the near future? According to Myhrvold, the answer is yes. “This is such an incredible food destination,” he says. “It’s inspired us so much already and we absolutely look forward to featuring artwork that highlights some of the great tastes specific only to NOLA very soon.” 305 Royal St., modernistcuisinegallery.com

New Views: A new exhibition at NOMA showcases some of the earliest known photographs of Eastern American landscapes.

While pictures of the American West have dominated the canon of 19th-century American landscape photography, there were many photographers who worked in the eastern half of the United States during that time. However, their pictures, with the exception of Civil War images, have seldom been exhibited — until now. East of the Mississippi: Nineteenth-Century American Landscape Photography, which was co-organized by the National Gallery of Art, Washington, is now on view at the New Orleans Museum of Art through Jan. 7.

This landmark exhibition, which features more than 150 works, is the first to exclusively explore 19th-century American landscape photography made east of the Mississippi River. Works on view—some of the oldest-known photographs ever made in the United States and many that have never before been exhibited—include daguerreotypes, salt prints, albumen prints, stereographic images and paintings ranging from 1839 to 1899. Because of their fragility, and sensitivity to light, the exhibition presents a once-in-a- lifetime opportunity to examine many of these important and beautiful records of American history. One Collins C. Diboll Circle, (504) 658-4100, noma.org

172
previous Defensive Leadership
next Make Baton Rouge Your Next Adventure