The top two floors of the Contemporary Arts Center building is now home to a 40,000-square-foot, full-service co-working facility aimed at our city’s creative entrepreneurs. 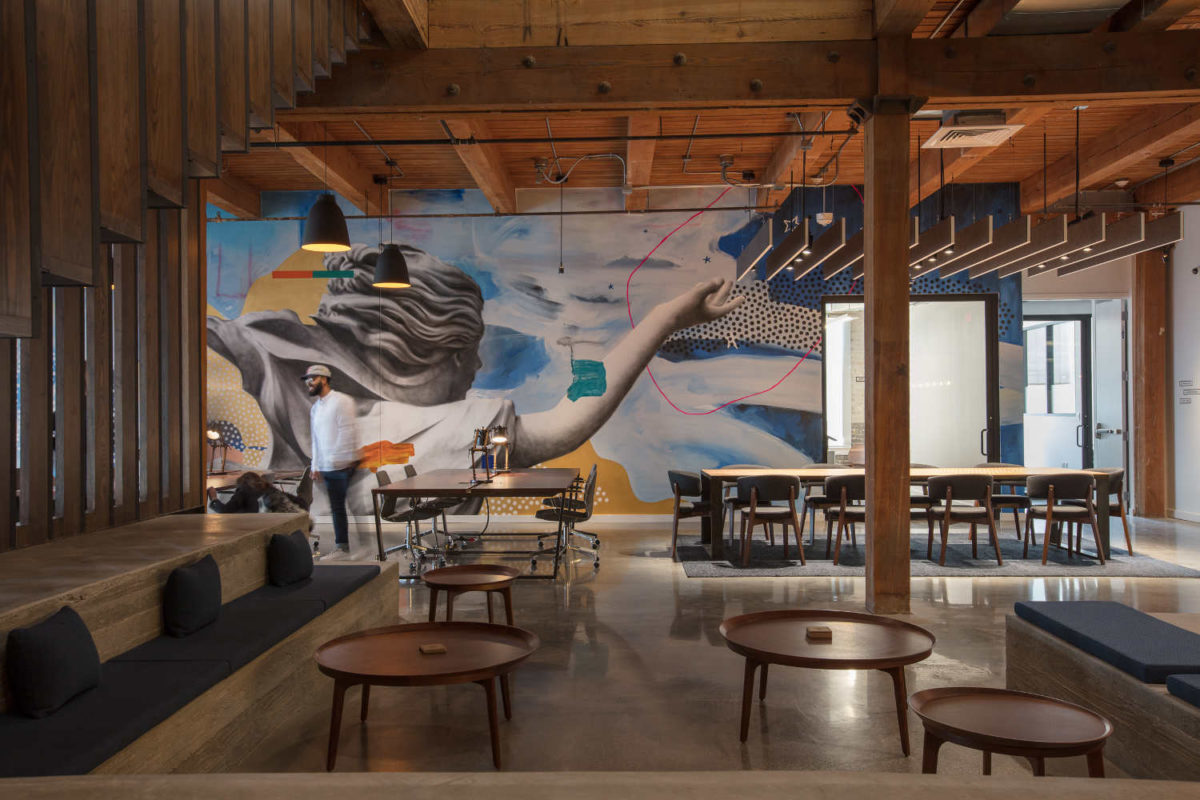 Easily one of the hottest business trends worldwide, co-working spaces are redefining what it means to go into the office each morning. According to Forbes Magazine, by the end of this year more than one million people globally will have worked in a co-working space. Even in New Orleans, a city not normally known for its cutting-edge business advancements, there are already several shared office environments … and that’s in Orleans Parish alone.

Just this past September, prominent developer The Domain Companies opened The Shop, one of the largest New Orleans co-working spaces on the third and fourth floors of the Contemporary Arts Center New Orleans. “When the opportunity came about to be within the CAC, it really was a perfect fit,” says Matt Schwartz, co-founder of The Domain Companies. “Both in terms of just being in one of the city’s best cultural institutions, surrounded by many others, and because of the physical space we had to work with.”

Originally built nearly a century ago, the Besthoff building is best known as the K&B warehouse (which was donated to the CAC in the early 1980s). Just last year, The Domain Companies leased the top two floors of the building and tapped local, award-winning architectural firm Eskew+Dumez+Ripple to handle the renovations. Transforming 40,000 square feet formerly used as extra gallery space and costume storage into a vibrant, modern co-working space was no easy feat, especially considering the CAC was still operating during the renovations. “The CAC was still an operating business during construction, so having to coordinate when workers could come, how materials could be delivered — all of this took an enormous amount of coordination with the general contractor and their subs, along with the CAC itself,” says Hussein Alayyan, senior designer at Eskew+Dumez+Ripple. The designers also had to work within parameters set by the Historic District Landmark Commission considering the owners were also seeking historic tax credits for the project.

Even with the obstacles they faced, the resulting metamorphosis is nothing short of amazing. The designers and architects at Eskew+Dumez+Ripple managed to incorporate existing historic details like the classic windows, exposed brick, pinewood beams and hardwood floors into an otherwise modern space with polished concrete on the third floor, glass-enclosed offices, and contemporary lighting and fixtures. A huge feature staircase was created between the third and fourth floor, evoking the sense of connection and ascension throughout. “We really wanted to layer in modern design that was contextual, but gave the space a very current and modern feel — and being in the CAC, that made a lot of sense,” Schwartz says. 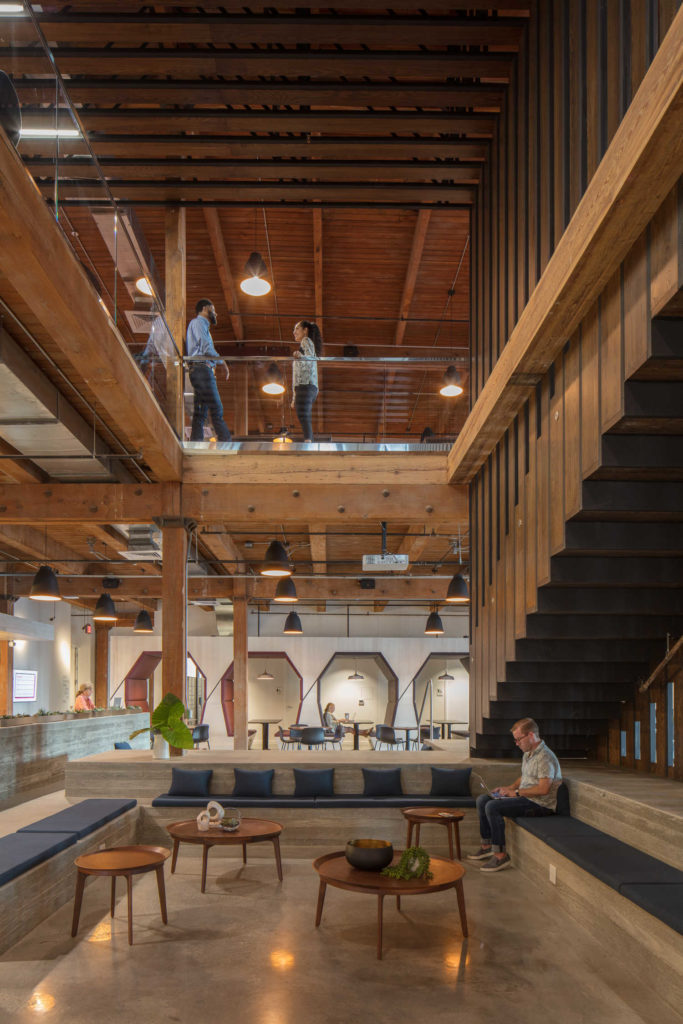 Another distinctly modern feature is the octagonal booths on the third floor. “It was really a labor of love,” Alayyan says. Eskew+Dumez+Ripple hired Construct NOLA, a local custom mill work, metalwork and design company to create the woodwork found on the booths, feature stair and other areas. The design even extends outdoors to a roof deck tucked into the St. Joseph Street side of the building with a unique view of the Warehouse District and the Crescent City Connection.

In order to emphasize the desired feel of shared atmosphere in the common spaces, interior designer Jill Taylor-Mayo from Eskew+Dumez+Ripple worked with local design firm AOS to select a distinctly eclectic collection of furniture that is attractive, comfortable and very unlike most office furniture. In fact, some of the pieces came from 1stdibs, an online high-end consignment store of sorts. “The owner wanted an eclectic, almost living-room-like feel to the common spaces,” Alayyan says. “He didn’t want the furniture to feel like a corporate office.”

Considering its location, The Shop would be woefully incomplete without art. “Where we deviate from the typical [co-working] space you would find in another city is we were very focused on creating a lot of opportunities for art,” Schwartz says. “Being in the CAC, being in New Orleans, having a large part of our focus being about supporting the cultural economy and art-based businesses … we knew that artwork would be a critical component of that.” Many pieces throughout the space were curated by Where Y’art, a local organization or self-proclaimed “community of lovers and creators of New Orleans art” who actively play a role in connecting artists to other artists, business opportunities and buyers all over the world.

Featured pieces in The Shop include paintings by Ellen Macomber, photographs by Eric Nunez, maps designed by Robert Tannen and stenciled murals by Jeremy Novy. There’s also a stunning mural in the fourth floor commons area by California artist CYRCLE, a two-person team made up of David Torres and David Leavitt who also recently completed a five-story mural on the Paramount building in the South Market District. Even the music piped throughout the shop was curated by a local DJ and tailored to evoke a certain energy that changes as the hours pass and day gives way to night.

Historic architecture, modern design, eclectic art and furniture … all of this culminates into a vast, unique co-working space replete with amenities for the creative professional. Freelancers, small businesses and even large corporations in need of remote offices can reap great benefits from The Shop. Not only is it far more affordable than conventional office space, The Shop offers a long list of amenities like high-speed Wi-Fi, IT support, business-class printing, a staffed reception desk with mail and package delivery, conference rooms with smart boards and videoconferencing, private phone booths, access to accounting and human resource services, and even a full kitchen with beer on draught.

Draught beer aside, the most valuable benefit of this type of co-working atmosphere is the level of connectivity with other professionals. “What you’re really doing at the core is moving away from that model where people are tucked away into cubby like cubicles or offices,” Schwartz says. “Open spaces offer visual connectivity with different people in the office and allows natural light to come into the entire space. It really changes the paradigm of what it means to be working in an office.” This unifying concept of connectedness and collaboration informed every aspect of The Shop’s design, from the way the furniture was laid out to the glass-partitioned offices.

Taking the element of connectivity a step further, The Shop also plays host to a series of networking events and programming. “What you see in a lot of these spaces is that programming will be entirely focused on business, or just networking opportunities,” Schwartz saus. “But we’ve taken a little bit of a different focus in that about half of our programming has absolutely nothing to do with business.” A series dubbed TP Talks offers a platform for journalists of NOLA Media Group to discuss local topical issues like the recent elections. Another event hosted by HYPLA – Hispanic Young Professionals of Louisiana featured an educational tasting of specially procured Spanish and Latin American wines.

It’s only been a few months, and The Shop at The CAC is already more than 60 percent leased. In addition to individual freelancers and small businesses, The Shop’s tenants include organizations like Idea Village, NOLA Angels Network, GNO Inc., John Payne Fidelity, Jones Walker, and Arcadia Marine & Shipping. “Bringing all of these different people into the space, you can imagine the networking events,” Schwartz says. “Really, just day-to-day walking through the space has the opportunity for interactions, and collaborations and exchanges of ideas that would otherwise never happen.” 900 Camp St., (833) 297-6044, theshopcac.com