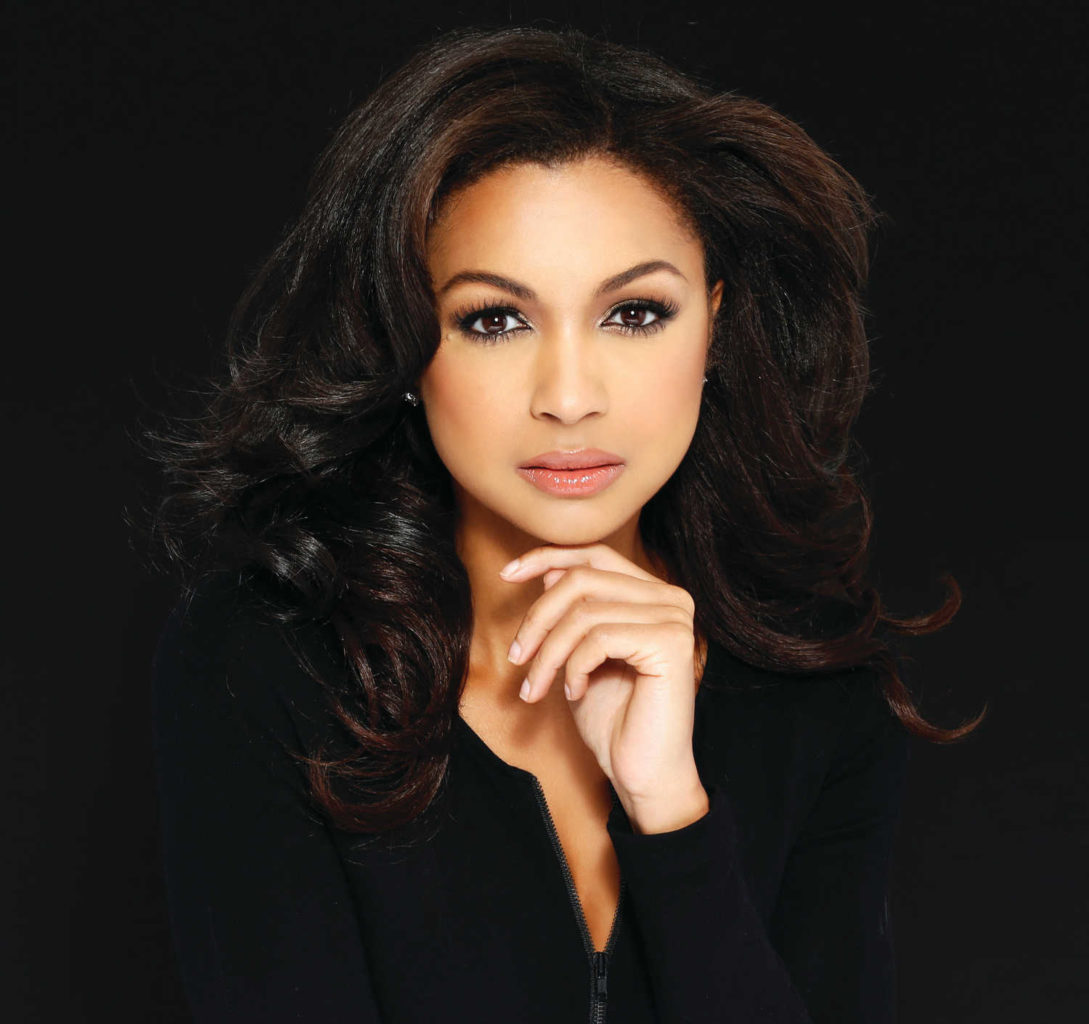 Eboni K. Williams has many professional accomplishments of which to be proud, including practicing attorney, pageant winner, radio talk show host and co-host of the Fox News Channel’s show, Fox News Specialists. The beautiful and savvy media legal analyst can now add author to her list of achievements with her new book Pretty Powerful: Appearance, Substance, and Success (Viva, $22) that aims to empower women by encouraging them to develop and flaunt both their feminine and feminist assets — and their strengths — while they strive to be their own fabulous, gorgeous, brilliant selves. Pretty Powerful dovetails personal narratives from Williams’ childhood to her career with insight gleaned from high-powered women in business, law, politics and media who’ve discovered their own methods for merging clout with style, including Marcia Clark, lead prosecutor of the O.J. Simpson trial; conservative commentator Dr. Monica Crowley; and President Obama’s social secretary and Vanity Fair CEO Desirée Rogers. Pretty Powerful also features Williams’ behind-the-scenes look at the media world and her take on dealing with issues that ambitious and attractive women face.

“Somebody asked me, if you had to summarize Pretty Powerful in one word, what is it?” says Williams. “It’s intentionality. This book is all about women being very intentional, strategic and delivering messages to connect with others. I tell a story in the book of how I was a young trial attorney, and I went into court to do a simple pleading, and an older woman attorney lent me her sweater and said, ‘Every judge is different, and, with this judge, you want to have something on your shoulders.’ You don’t think small stuff like that makes a difference, but it does — so we can empower ourselves around that kind of information. In the book, I discuss what makes women like Beyoncé, Tyra Banks and Taylor Swift so successful. We all know they’re attractive, but it’s that business acumen, control and intentionality behind them that separates them from others.”

In Pretty Powerful, Williams invites readers to define for themselves what the word “pretty” means. “It’s making the best of yourself, and it’s up to you to decide,” Williams says. “If your expression of [being] pretty powerful is a tattoo sleeve, have at that. For years, media, magazines and television have told us what it looks like to be pretty or valued as women, and we’ve got to reject that, because it’s hard in today’s society to feel good about yourself, especially with stuff like Instagram. And when I think of the most beautiful women in Hollywood, they’re all over 45 — Diane Lane, Julianne Moore, Angela Bassett. Are you less confident, sexy or less of a woman as you age? We’ve got to redefine that.”

Williams hopes Pretty Powerful will make others feel empowered, confident and affirmed after reading it. “Nobody’s got time to sit around and affirm you at every corner,” Williams says. “You’ve got to affirm yourself. That’s why I write about being a young black woman at a conservative-leaning network; if I’m waiting on the Fox News audience to affirm me, I’ll probably be waiting a bit, right? You have to walk into the space like, ‘I’m here with purpose, an open heart and mind, and I’ll do my job as best I can, and it’ll be received or it won’t be.’ Also, is success making lots of money? Having 2.5 kids? You get to decide that for yourself. And ‘pretty’ and ‘powerful’ can be embraced simultaneously. There are tangible benefits to being ‘palatable’ or ‘commercially appealing’ I discuss in the book, but, like my mom said, ‘pretty’ can get you in the room but it won’t keep you there. We blow dry our hair and try to be attractive, but we also must prepare, be substantively on it and know what we’re talking about.”

Williams also explores sexual harassment in Pretty Powerful, including her encounters with ousted Fox News CEO Roger Ailes. “No matter what, we can’t get away from other people’s biases, what they project on us or their behavior,” Williams says. “A dress might signal an invitation. It’s wrong, and, at the same time, it’s necessary for professional women to have working relationships with men. Our male colleagues have the benefit of developing personal relationships, whether they’re playing golf, tailgating or having Scotch together after work, so when it’s promotion time, they often have an advantage. It’s important for women to develop those personal connections at work without it feeling uncomfortable, where someone doesn’t get to ask a woman who they’re dating if that’s uncomfortable for them, versus some women who think that’s a normal question. We’ve got to open up that dialogue about people’s thresholds and keep the conversation going. The line of consent is not black or white; it’s not simple. We all know people that married somebody they work with; that’s grown people making choices, so how do you distinguish that from experiences that feel like harassment?”

Williams is thankful for the opportunity Bill O’Reilly gave her to contribute on his show The O’Reilly Factor on the Fox News Channel, which was one of the highest-rated shows on cable television until O’Reilly was fired in April amidst multiple sexual harassment allegations. In September, Fox News Specialists, where Williams was a permanent host along with Eric Bolling and Katherine Timpf, was cancelled due to allegations of Bolling’s sexual misconduct. “Fox News is where I absolutely wanted to be,” Williams says. “Contrarian or in sync, I was welcome to have whatever opinion I wanted to have. Nobody ever told me what to say. I am appreciative to Fox News because I was allowed a platform to speak to people from all sectors who maybe wouldn’t otherwise engage with someone with my perspective or point of view. That’s valuable to political dialogue. The echo chamber of people talking to people just like them all day is counterproductive, and I think that’s most of the reason why we’re where we are as a society. We can’t even talk about anything today. And I had a great relationship with Bill; he treated me professionally, and he was my mentor, but I can’t speak for his dynamic with other women.”

In 2007, Williams graduated with a juris doctorate from Loyola University New Orleans College of Law after receiving a bachelor of arts degree in communications and African-American studies from the University of North Carolina at Chapel Hill. “I didn’t know any lawyers,” Williams says. “I talked a lot, and was very precocious and strong-minded, so growing up everyone told me I should be a lawyer. My family’s from rural Amite in Tangipahoa Parish so I’m a first generation college grad, and to go to law school felt important for my family legacy to break that generational poverty.” The strong women in William’s life have influenced her immensely. “My grandmother worked as a domestic — and my mom knew my grandmother was doing the best she could — but my mom wanted more. My mom attended Southeastern but left to open a business because she wanted economic empowerment in a hurry. I was in a hurry too and went to Chapel Hill at age 16, because I wanted to go straight to law school even though I didn’t know what that meant. You find out when you get there!”

Williams enjoys being a mentor for students regarding leadership development and college preparation. Last fall, she returned to her alma mater, Loyola University New Orleans College of Law, for a reception and book signing of Pretty Powerful held in conjunction with Loyola’s award-winning School of Mass Communication. “I tell students there are options out there beyond traditional law or communications,” Williams says. “I want students to feel empowered to customize a career path that suits their skills and passions like I did with my love for law, politics and media. As a broadcaster, much of what I do is similar to my preparations as a lawyer, so I tell students to master the skills they’re being afforded in these programs [and] then they’ll have the world at their feet in terms of opportunities.”

While in New Orleans, Williams was a panelist at a Continuing Legal Education seminar at McGlinchey Stafford LLP, co-hosted by the Louis A. Martinet Legal Society and the Association of Women Attorneys, and a judge for the 2018 Miss Louisiana USA Pageant, at the Jefferson Performing Arts Center in Metairie. “I was Miss Lafayette in 2007,” Williams adds. “That was fun! I did Miss Louisiana USA and then Miss North Carolina USA, and I was first runner up in 2009 when I was practicing law in North Carolina.”

Living in Harlem for the past three years has been exciting for Williams. “I love New York,” says Williams, who used to co-host The Curtis & Eboni Show on WABC Radio in New York City. Before that, she was a trial attorney in North Carolina; then lived in Los Angeles for five years where she worked hard to forge the unique career she has today. She served as a CBS News correspondent, an HLN contributor, a talk radio host on Los Angeles’ KFI AM640, and she made appearances on the NFL Network and CNN. “I did radio and stuff for free, while doing document review, which was horrible because I had security before as a traditional trial attorney. Doing that hourly work wasn’t intellectually stimulating. It was humbling, but it prepared me for the inevitable ebbs and flows. There is no static success. Since the Fox News Specialists was cancelled, I must rebuild my role at the network.” Williams recently filled in on Fox & Friends Weekend for Abby Huntsman who is on maternity leave.

Williams was a second-year law student at Loyola during Hurricane Katrina. “New Orleans is obviously amazing, but the most impressive thing about it is its resilience,” Williams says. “I evacuated and came back with most of our class, and that resilience was a testament to the spirit of the city, even in the face of all the political chaos. The fact that people came back home because well, this is home even if another big storm’s going to come — [it’s] amazing! I’m always inspired by New Orleans every time I come back. I’m a big foodie and this is where I had my introduction to raw oysters, and I still love them to this day! I enjoy bourbon and all that good stuff, and I acquired that taste down here where the full flavor of food is so appreciated. There’s good food in New York and L.A., but nothing comes close to what they do with food in New Orleans. It’s a real love language and part of the culture!” Williams is an honorary co-chair of the Louisiana SPCA’s 2018 Howling Success Patron Party & Gala in order to help homeless animals in the local community. ebonikwilliams.com, @ebonikwilliams