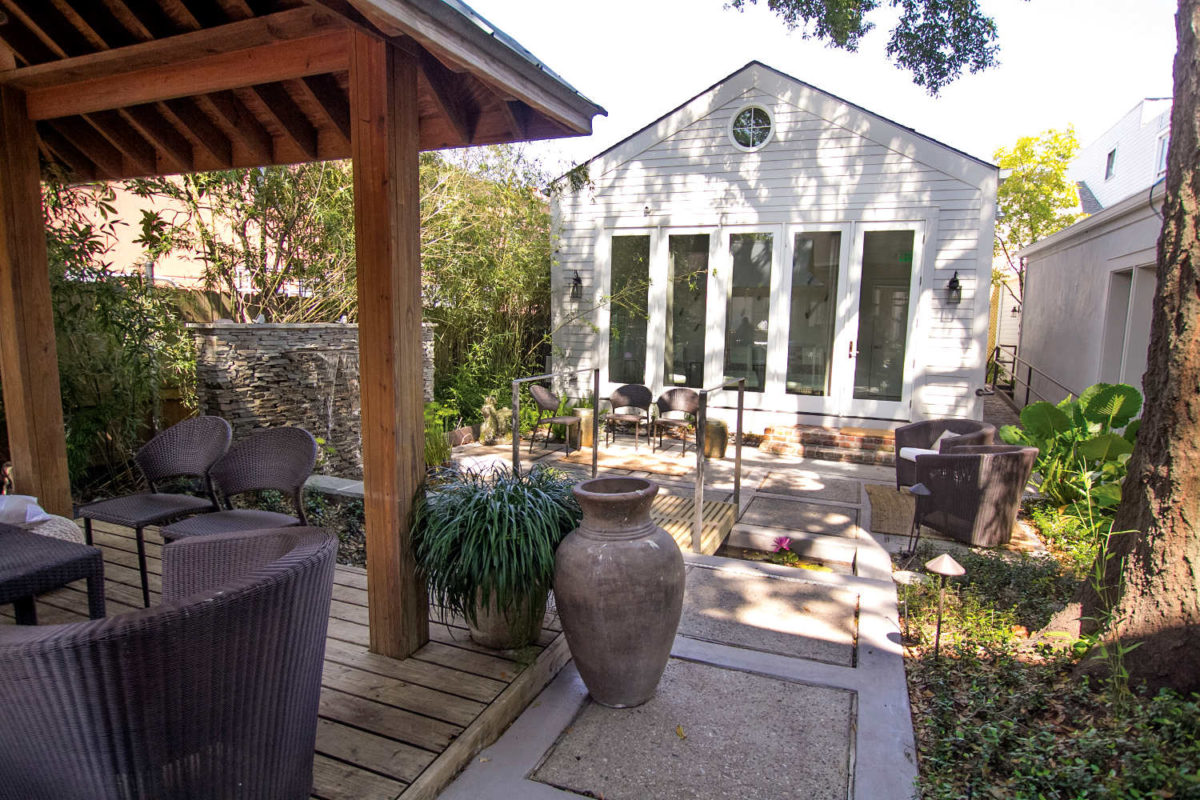 In a flurry of new and revamped stores along a stretch of Magazine Street — including NOLA Couture moving into the old Hemline space, Hemline moving to the old American Apparel space next door and the new Lionheart Prints flagship store — Belladonna Day Spa has also redesigned its space and increased its offerings.

Belladonna, which originally opened in 1989 on St. Charles Avenue, moved to its current home on Magazine Street in 1995. JMH Companies purchased Belladonna in Oct. 2016, and the spa is now under new management. In addition to an expanded retail space and merchandise (there’s a wide array of professional skin care and personal care products, unique gifts, and seasonal treats all on offer), there are also new offerings in terms of amenities. Of these, the new outdoor tea garden provides a relaxing escape from the hustle and bustle of daily life in the city. Meanwhile, the gorgeous Relaxation Room, and men’s and women’s robe lounges, are additional areas where you can find your zen. The reception area, sauna and nail lounge have also been redesigned with a modern touch.

Preterm Birth on the Rise: Louisiana ranks among the worst in the United States for preterm birth — here’s how to help.

The recently released 2017 March of Dimes Premature Birth Report Card shows that the nation’s rate of preterm birth — the largest contributor to infant death in the United States — increased again in 2016. After nearly a decade of decline, the rate of preterm birth rose in states across the country for the second year in a row, earning the nation a C grade on the report card. According to the report, more than 380,000 babies are born preterm in the United States each year, facing a greater likelihood of death before their first birthday, lifelong disabilities or chronic health conditions. Of those babies who do survive their first year, many suffer breathing problems, jaundice, vision loss, cerebral palsy and intellectual delays. Sadly, here in Louisiana, the preterm birth rate of 12.6 percent earned the state an F on the report card.

”We see that preterm birth rates worsened in 43 states plus the District of Columbia and Puerto Rico, and among all racial/ethnic groups,” says Stacey D. Stewart, president of the March of Dimes. “This is an unacceptable trend that requires immediate attention.”

While there is no one cause of preterm birth, and no simple solution, the March of Dimes is taking action on multiple fronts nationally and in communities with the greatest needs. For example, the organization is expanding scientific research; increasing education; strengthening advocacy for policies that prioritize the health of moms and babies; and improving clinical care programs and practices.

For detailed national, state and local perinatal statistics, visit peristats.org. To learn more about the March of Dimes and its solutions, visit marchofdimes.org and nacersano.org.

The highly anticipated Marconi Path has opened on the west side of City Park, completing the fourth side of the park’s bike path project: Robert E. Lee; Wisner; Harrison; and now, Marconi. The 10-foot-wide concrete pathway stretches more than one mile, connecting the existing asphalt along Robert E. Lee to the existing route along Harrison Avenue. The path is located on the east side of Marconi, passing along the lagoon edge between beautiful oak and cypress trees.

The bike path, which is a Transportation Enhancement Project funded in part by the Louisiana Department of Transportation and Development and the Federal Highway Administration, cost nearly $700,000 to build. But, thanks to this project, the Marconi Bike Path fills in the missing link of the path.

“Even if you don’t have your own bike, you can rent one at the Boat House on Big Lake,” says Maria Muro, publisher of New Orleans Living. “It’s a great way to get outside; get some exercise; and enjoy the beauty of City Park.” neworleanscitypark.com