A new generation of leaders has led the Saints into the NFL’s post-season spotlight. 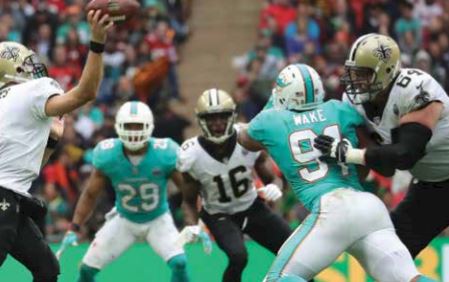 Among the remarkable achievements for the New Orleans Saints in the 2017 season have been the team’s first playoff run in four seasons, the establishment of a league-leading run game and the creation of one of the team’s best defenses in its history. This month, those feats will be recognized at the NFL Pro Bowl to be held in Orlando, Florida. Six Saints were picked (tying the franchise for the most players selected in one season) to participate in the league’s year-end game recognizing its best athletes (the second most in the league). The record was previously held by the 1987 Saints, a team that went 12-3 to march into the playoffs for the first time in team history. The selections included quarterback Drew Brees; running backs Mark Ingram and Alvin Kamara; defensive end Cameron Jordan; cornerback Marshon Lattimore; and wide receiver Michael Thomas.

Running backs Ingram and rookie Kamara are the first tandem selected to the Pro Bowl from the same team’s backfield since Warrick Dunn and Mike Alstott of the 2000 Tampa Bay Buccaneers. The only other pair in history to accomplish that feat were Jim Otis and Terry Metcalf of the 1975 St. Louis Cardinals. And the pairings are remarkable in that both of the prior backfields to earn the dual Pro Bowl honor were legendary “Thunder and Lightning” duos not unlike Ingram (the “Thunder”) and Kamara (the “Lightning”) themselves, though, in New Orleans, they have become known as “Boom” (Ingram) and “Zoom” (Kamara).

This is Ingram’s second career Pro Bowl selection (joining George Rogers (1981-82), Rueben Mayes (1986-87) and Deuce McAllister (2002-03) as the only Saints running backs to accomplish that), and he has been the Saints lead back through the season, piling up more than 1,500 total yards from scrimmage into December. In 2017, Ingram also became only the third Saints running back to generate two consecutive thousand yard seasons, following Deuce McAllister (2002-04) and Ricky Williams (2000-01), all while setting career highs for rushing yards, total yards and touchdowns. After occasional struggles with injuries and adjusting to the NFL game as a first round draft pick out of Alabama in 2011, Ingram has become one of the team’s all time great running backs and is now second all time in rushing yards, average yards per carry and rushing touchdowns.

Ingram’s backfield-mate, Kamara, has earned comparisons to NFL greats like Marshall Faulk in terms of his multiple skills in the running and passing games, which he has shown in the course of his rookie outing. Emerging from the third round of the NFL draft, it’s pretty clear that the Saints pulled off a steal by getting Kamara at that relatively late stage considering what he would ultimately be able to accomplish this season, including, as of December, ranking first in average yards per carry in the NFL; seventh in total yards from scrimmage; and second in total touchdowns. Expectations for that sort of production is usually reserved for the highest tier of first-round draft picks. Kamara joined the company of George Rogers, Reuben Mayes, Ricky Williams and Chuck Muncie as having among the best seasons for any rookie running back in Saints history. Heading through December, Kamara already had more than 1,300 combined yards. Together with Ingram, they were on pace to become the second backfield tandem to generate more than 1,400 total yards each ever, following only the Cleveland Browns’ renowned Earnest Byner and Kevin Mack in 1985.

The youth movement continues with Marshon Lattimore, the youngest Saint to ever make the Pro Bowl, who may be the first true shutdown cornerback in the team’s history. To give an idea of the paucity of success the Saints have had since 1967 at the position, Lattimore is only the fourth cornerback in team history to be selected to the Pro Bowl — the others being Dave Whitsell (1967, with a still-remarkable 10 interceptions), Dave Waymer (1987) and Eric Allen (1995). That’s it. The Saints have enjoyed just three Pro Bowl-worthy seasons from all the cornerbacks who have worn the black and gold since 1967, and none in the last 22 seasons.

Lattimore, the 11th overall pick in the 2017 draft, earned the honor in just his first season, and it appears it will likely not be his last. Perhaps the most telling demonstration of Lattimore’s effect on the team was that in a nine-game stretch as starting cornerback, the Saints allowed 20 points or less in eight of those games, while, in a two-game stretch that Lattimore was out, the Saints failed to accomplish that on both occasions. Lattimore and Kamara are only the third and fourth Saints non-special teams rookies, respectively, to make the Pro Bowl, following in the steps of George Rogers in 1981 and Reuben Mayes in 1986. Making it together in the same season is a remarkable accomplishment never previously done by any Saints rookie duo previously.

Along with Kamara and Lattimore, wide receiver Michael Thomas is yet another of the young corps that has helped create a new attitude and style for the team. Amazingly, despite having a perennial top 10, and often the top, offense in the league under Sean Payton since 2006, no wide receiver, not even Marques Colston, has ever made a Pro Bowl under his regime until now with Thomas. Aside from Thomas, the only wide receivers to make the Pro Bowl at all for the Saints in their entire history were Joe Horn (2000-2002 and 2004), Eric Martin (1988) and Wes Chandler (1979). As of December, Thomas was third in the NFL in receptions. Like Kamara and Lattimore, Thomas has broken the mold under Payton, whose teams have often been led by a committee or wideouts and receiving backs — as in 2017, Thomas has been the focal point of the passing offense. The last two Saints named to the Pro Bowl, Cameron Jordan and Drew Brees, have been the defensive and offensive leaders, respectively, for the team for some time. But it appears that the franchise as a whole is developing a new appearance, and a new offensive and defensive reputation, which will be very different from what Saints fans have grown used to over the last decade. The NFL Pro Bowl may well be a glimpse into the future of the next decade to come.