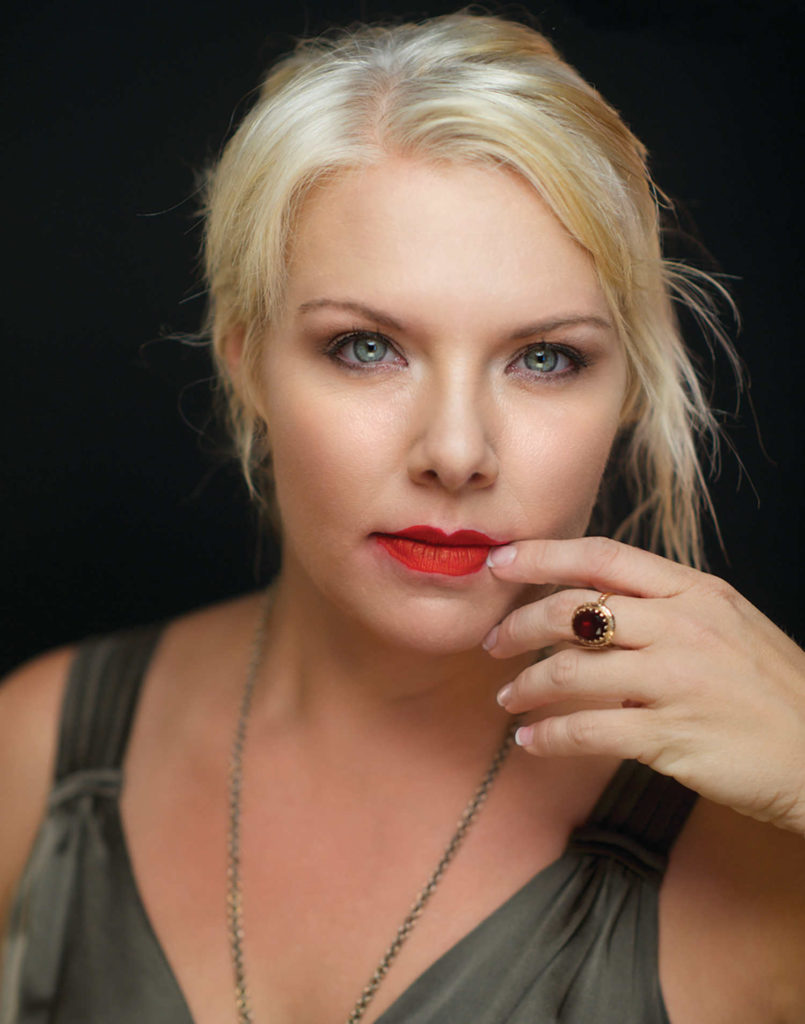 Amanda Walker is a vibrant presence on New Orleans’ impressive music scene. Since 2006, the effervescent pianist/singer/songwriter has been lighting up bars, festivals, clubs, restaurants and other venues around the city with music that ranges from an all-request catalog. Walker can perform just about anything on demand, from Pink Floyd and Patsy Cline to her own original compositions. Recently, while tinkling the ivories at Chophouse New Orleans on Magazine Street, Walker took requests from an audience member who turned out to be Michael Zinberg, a director on NCIS: New Orleans, the military drama/police procedural that is filmed in the New Orleans area and the third television series in the popular NCIS franchise. Later, Zinberg invited Walker to perform on the hit show, currently in its fourth season. On the Feb. 27 episode, the bubbly chanteuse will make a cameo appearance playing piano and singing her latest single, “Haunt Me.”

“The whole thing is amazing to me,” Walker says. “Michael came in to the Chophouse and was in the bar requesting songs, and we were chatting back and forth. I was like, ‘This guy’s awesome,’ and he was getting ready to leave and he said, ‘What’s your name again?’ and I told him and he said, ‘I would love if you were on my show.’ I said, ‘Oh, cool! What’s the name of your show?’ and he said, ‘NCIS: New Orleans,’ and I was like, ‘I would like to be on your show too! Funny you should mention that — sounds like a great idea!’ People are always coming up and saying, ‘Oh, I want you to do this or that,’ and I’m like, ‘Of course!’ And then nothing ever comes of it. It wasn’t 48 hours later when I was contacted by Kyle Lamy, the music supervisor on NCIS: New Orleans on my Facebook band page, so they had Facebook stalked me! Best stalkers ever!”

On NCIS: New Orleans, Walker portrays herself performing “Haunt Me” on the piano at Pride’s Bar, owned by Special Agent Dwayne Pride, who is played by Scott Bakula. “Yes, I will be playing the very difficult role of Amanda Walker,” she says. “It’s me playing solo in the bar, and the scene is set up so it’s like I’ve come in after a gig, and I’m playing my new song for a couple of friends, and apparently I’ve probably had too many glasses of wine on my gig and maybe hopped on whatever piano was closest — just like real life, there was no acting involved! Scott Bakula’s character, Pride, is in the scene with me, and one of his buddies comes in to have a conversation; stay tuned to see what transpires! I was in hair and makeup with Scott Bakula, and that dude’s a trip! Oh man, he’s this bundle of awesome energy! The crew did great lighting work. The set at their studio in Harvey was so cool. It felt like a real bar in there.”

Walker began playing piano at a young age in her hometown of Dexter, Missouri, a rural town between Memphis and St. Louis. “It’s totally the Bible Belt with 7,500 people, and I think now they have more than three stoplights,” Walker says. “My mom taught piano lessons in our living room, and she played piano in bands, at church, at weddings and funerals, so I’d be in my playpen in the living room and probably learned to read music before I learned to read English — so I consider music my first language. My dad says I was playing “Here Comes the Bride” with both hands when I was a year and a half. Playing piano is like breathing to me; people will ask me, ‘How are you sitting there having a conversation and playing?’ It’s actually second nature, and I’m thinking more about the conversation.”

During college at Southeast Missouri State in Cape Girardeau, Walker mainly played tennis. “That was so fun,” she says. “My hometown is so homogenous, but, with NCAA sports, almost none of my teammates were from the U.S.; they were from Colombia, Spain, Peru, Poland, Australia and South Africa. My Spanish got really good!” After college, Walker went to Tulane University Law School, and her indoctrination into the New Orleans music scene took root.

“Katrina hit the first week of my last year of law school, so, when we came back, the city was totally devastated, and I lived in a spare bedroom at one of my professor’s homes until I found a place in the Quarter,” Walker says. “I was living on student loans and tutored to make extra money. I went to dinner at Philip Chan’s Asian Cajun Bistro with my buddy Matt, and he pointed at the piano and said, ‘Go play it!’ and I was like, ‘No, I’m scared!’ When we were the only people in there, I played a couple of songs and Philip came over and said, ‘What do you do Thursday through Sunday nights?’ That was my first gig, playing mainly for tips, free food and endless glasses of wine. I was terrified because I’d never played out in public before and wasn’t doing requests; I just had a set I did. But doing Dueling Pianos every Saturday for three years at Spirits on Bourbon Street was baptism by fire, because you had to learn everything and know it on the fly. People would request Top 40 Country and Top 40 Pop, and I got really good at doing requests.”

Walker graduated law school in 2006 and worked five days per week at the Jefferson Parish Juvenile Court for Hon. Ann Murry Keller for almost four years, while playing piano six nights per week. “One night after a gig, I went down to the river,” Wlaker says. “[I] was skipping rocks and drinking a glass of wine thinking of how I had to be at work in a few hours and I was like, ‘Why am I doing this?’ It’s nice to just be able to sink myself into music. I set an intention, and, over the course of six months, things aligned and I was able to transition into doing music full time in 2013 or 2014. Ann Keller is precious, but practicing law is great for other people.”

In addition to her talent for performing countless covers on the spot on piano, Walker focuses on writing her own music — a blend of indie pop, Americana and folk rock that melds Mississippi River Delta soul and Ozark Mountain folk sensibilities with New Orleans funk. Walker often composes songs on guitar, but “Haunt Me,” which she describes as “creepy rock and roll,” was written on her beloved piano. “My piano is a Chickering grand, and her name is ‘Fancy,’ and the cool thing is that it came out of the Monteleone Hotel,” Walker says. “It’s black with lots of scrapes and scuffs, and God knows how old the thing is and what it’s seen and who’s played it. ‘Haunt Me’ is the first song I wrote on it. I swear the piano wrote the song! I sat down, and I don’t even know what the song is about! It’s somebody’s story, and I felt like I just channeled it.”

Walker recorded “Haunt Me” at Esplanade Studios and will be back there soon to record new material. She also recently released a five-song EP called Long Way Down, which was recorded in Nashville at The Job Site. “Everything is available through digital download at this point; my stuff has been accepted by Pandora and it’s on Spotify and stuff, and I plan to press some CDs because people ask for them,” says Walker, whose music has been played on WHIV 102.3 FM and WWOZ 90.7 FM.

Walker lives in Algiers Point, close to her favorite haunts, including Congregation Coffee Roasters, The Crown & Anchor English Pub, Tavolino Pizza & Lounge, and The Old Point Bar, where she often plays with her band, The Misfit Toys. “Glenn LeBlanc plays guitar; Jason Asby plays bass; Spencer Knapp plays drums; and I play keys and boss everybody around,” says Walker, who will perform at The Old Point Bar Feb. 18 at 3:30 p.m. “My friend Rick Gadd did a video for my song “I Love You,” which features my dog Raksha, a Siberian Husky mix and her friends, including his Doberman Cash, throwing a party while I’m at my gig at the Old Point and tearing up my house, so there’s no acting involved!”

Most nights Walker plays at Chophouse. She’ll be at L’auberge Casino Resort in Lake Charles Feb. 1-3. She’s performed all around town, including at The Ogden Museum of Southern Art, The Bombay Club, Oak Wine Bar, House of Blues and the New Orleans Museum of Art. “I got to sit in with Dweezil Zappa’s band during Jazz Fest two years ago at Tipitina’s, which was awesome,” Walker says. “I did Essence Fest once, backing Chaka Kahn on keys and vocals, which was my crowning glory of coolness! I thought, this is the coolest thing I will ever do in my life!”

Walker adores life in New Orleans. “I love this city,” she says. “It’s such a great town for entertainment of any kind. The SideBar by the Criminal Court on Tulane and Broad on White Street has some of the most incredible live jazz you can get your paws on; you’ll hear the most amazing sounds your ear could ever hear! On afternoons off, I take the ferry across the river and walk through the Quarter and wander into whatever, and it’s always going to be fabulous! I love Sylvain; the vibe and the food are magic. I like Superior Seafood. Seaworthy by the Ace Hotel does a great late-night happy hour. I’m always down for an oyster happy hour! I will eat all the oysters! I’ve never tested the outer limits of how many dozen oysters I could eat, but it’s a lot of dozen oysters!”

Walker loves animals and is an honorary celebrity chair for the Louisiana SPCA’s 2018 Howling Success Patron Party & Gala, held later this year. “The LA/SPCA in Algiers spayed my dog Raksha; they are amazing,” Walker says. “It’s important not to support puppy and kitten mills, and to adopt animals, or take in strays because they can get hurt if left alone. I found my cat Mosca when she jumped into my arms in the parking lot at Mosca’s. Even if you don’t adopt from the LA/SPCA, you can still use their services, which are economical and their vets are great! The LA/SPCA does so much for the community.” @amandawalkermusic, @walker_amandaj and reverbnation.com/amandawalker8