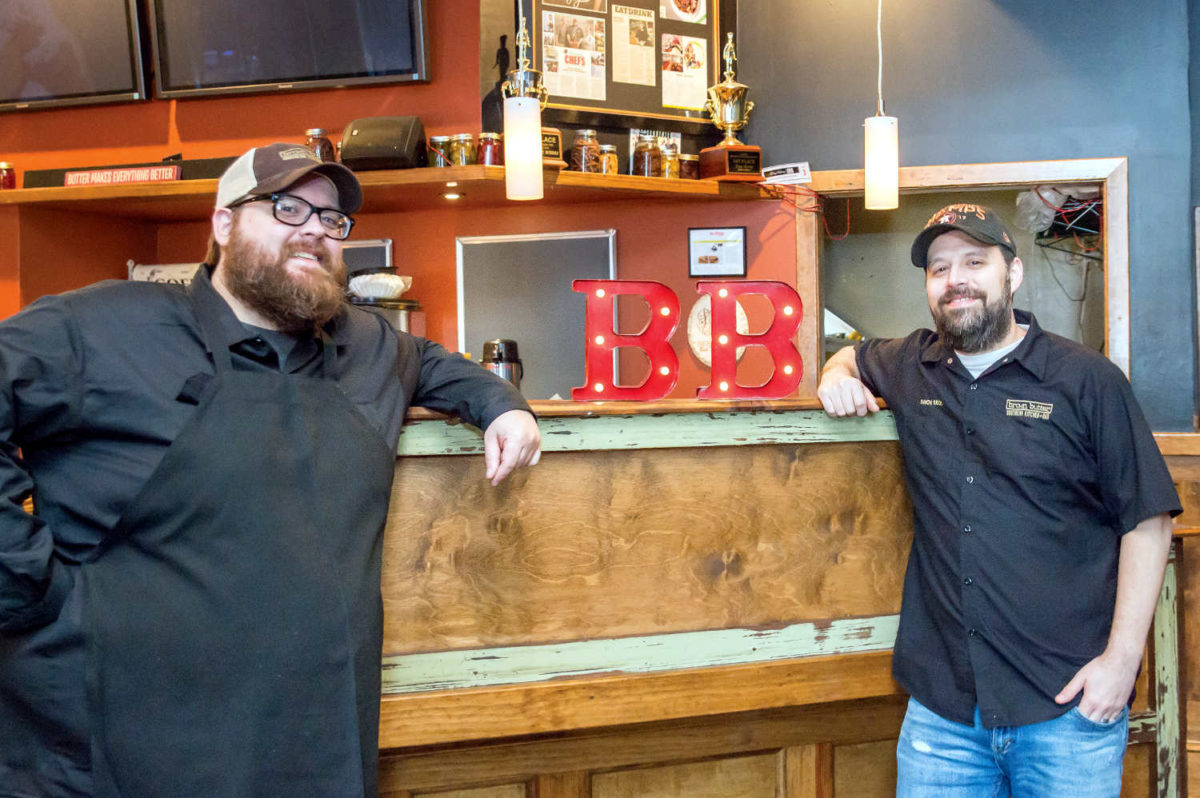 Dayne Womax and Simon Beck, owners/operators of Brown Butter Southern Kitchen & Bar, first met when Beck worked front of house and Womax worked back of house at Fresco Cafe on Maple Street back in 2002. While Beck is originally from Houston (he moved here in 1999 to attend Loyola University), Womax grew up in LaPlace (the andouille capitol of the world). The two partnered up three years ago to open Brown Butter, and they haven’t looked back since.

However, it was something called the Salty Swine Supper Club that flamed the fires for the duo to create Brown Butter.

Salty Swine was the brainchild of Womax and his friend Joshua Garic, who is now Executive Chef at Jacmel Inn in Hammond. Theirs was the first supper club to feature invite-only, private, top secret-themed menus. After doing many successful monthly supper clubs, they brought Beck in to be more of a friendly front of house element for the guests.

“He took the reins and really became a huge part of the Salty Swine Supper Club’s success,” Womax says. “Simon and I working together again at the supper club [inspired us] to start an actual business, and we started looking for spaces and funding. We are approaching our three-year anniversary, and we are super excited to be a part of the ever-expanding restaurant scene in this city. I am in charge of all food-related applications in the restaurant and Simon handles the day-to-day business and front of house side of things. We pride ourselves in serving comforting, thought-provoking food at an affordable price in Mid-City.”

Womax and Beck originally decided to focus the menu at Brown Butter on upscale, Southern cuisine. Rather than focusing solely on Cajun/Creole cuisine, they wanted to highlight Bible Belt cuisine that a lot of New Orleans restaurants typically don’t feature. “We draw from all different regions of the South, often incorporating flavors and themes from all over the Southern region,” Beck says. “We don’t limit ourselves to the South though; it’s not uncommon to find international components to our dishes. Current examples include our boudin banh mi and our Seoul Bowl.”

Brown Butter is known foremost for its burgers. Diners can choose from burger options such as a pimento cheese burger with pickled onions or the popular brunch burger with bacon onion jam, Brie cheese, a fried egg and arugula on a brioche bun. Other menu items that are currently popular include the award-winning vinegar-braised beef short ribs with stone ground grits and peanut salad. New menu items include smoked wings (Korean or Carolina style) and a paneed pork chop with heirloom beans and sweet-corn, green-tomato chow chow. “Looking into spring and summer, we will be featuring a lot of seasonal fresh vegetable offerings from our friend Michelle Posey at Pelican Produce Farms,” Womax says.

The unassuming space in a Mid-City strip center that Brown Butter now occupies previously housed a local wing chain. Womax and Beck immediately set out to give it a facelift that would make diners forget that they were in a strip center. They did that by adding a lot of warm wood tones, dark walls and art (all for sale). “Our ambience is casual and homey, for sure,” Beck says. “We want our guests to feel comfortable for any meal service and to be comfortable dressed way up or way down. We are thrilled by the reception of the neighborhood and the city to Brown Butter, thus far.”

In terms of what’s next for this talented duo, they both say they are looking forward to reviving the monthly Salty Swine Supper Club events at the restaurant. “This is something I have been wanting to do since we opened, but opening a new restaurant is a lot of work and time-consuming,” Womax says. “Another location is always an option for us, but we love our Mid-City family and we are really striving to become a neighborhood established eatery similar to the likes of Liuzza’s and even Mandina’s if we are so fortunate.”

And while Womax loves cured and smoked meats, and cooking with a crockpot while at home, there is one unchartered area of cooking that he has yet to master. “My mother is an incredible baker and cake decorator,” he says. “I have never been a super strong baker like her, although she has shown me many things in my youth. I understand baking enough but have lacked the patience in my younger life to give it the time necessary. Hopefully soon I can bring a legit pastry program to Brown Butter now that I am a little older and hopefully patient.”

Overall, Womax credits the strong, tight-knit staff at Brown Butter for the restaurant’s success. “We are blessed to have a core group of people that believe in us, and our vision here, and take pride in building this restaurant with us,” he says. “We love each and every one of our employees, and that love is hopefully felt by our customers with the level of service they receive at our little strip-mall spot in Mid-City.” 231 N. Carrollton Ave., (504) 609-3871, brownbutterrestaurant.com