Home SPORTS The Other Side of Winning
SPORTS
December 8, 2008 Paul Wegmann 0

The Other Side of Winning

Chris Paul shows his leadership skills, on the court and through his charitable organization

The participants discussed a tripartite association to promote local charity in the form of the inaugural Chris Paul Basketball Camp, the partnership of Brooks’ Teammates for Kids Foundation with Chris Paul and a new culinary delight created for a charitable purpose of its own by Copeland’s Restaurants. Perhaps what it revealed most was the shared effects of stardom, the role of fame and the overarching need that some successful people in entertainment and business feel to return some of the great fortune they receive from the public, and the steps they take to accomplish that.

Chris Paul’s exploits on the hard court are legendary locally, but what is becoming ever more apparent and appreciated is his humble, selfdeprecating approach to his career and accomplishments. In keeping with that, he has brought a basketball camp to the city, one in which he personally participates. His involvement in the camp has been highly personal, including taking pictures with the children, giving them instruction and allowing them to play against him one on one. But clearly he sees something important at stake in his role: “This is an opportunity these children have to meet an NBA professional, and I just want to give them hope. The biggest thing I try to project to the kids is that if you believe in yourself and you try as hard as you can—and I am living testimony—anything is possible.”

Paul has also aligned himself with the Al Copeland Foundation, led by Charli Copeland Womack, and Copeland’s Restaurants executive chef Chuck Wheeler to advance the cause of charity in his adopted hometown even further. Paul and Wheeler have created a special menu item available at the restaurants nationwide, and the dish is a “CP3” themed concoction called CP3 Roasted Pork: a three-chile-pepper specialty containing orange-chipotle-marinated pork loin with ancho-chile-crushed potatoes, roasted corn salsa, jalapeño relish and chile-butter demi-glace. As Paul explained, “It’s for a great cause—half the proceeds go to our foundation [the Chris Paul Basketball Scholarship Foundation] and the other half will go to [the Al Copeland Foundation] trying to fight cancer.” The Copeland Foundation was founded in honor of Womack’s father, Al, the local restaurant magnate whose life was cut short by a rare but aggressive form of cancer called Merkel cell carcinoma. The foundation has teamed up with the University of Pittsburgh in an effort to prevent or cure that particular kind of cancer. It’s a remarkable concept that a person attending a nice dinner can contribute to a good cause by ordering off the menu. 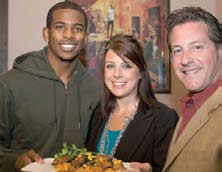 The presence of Garth Brooks as the final participant in this trinity of charity might seem incongruent, especially as a conjunction of basketball and New Orleans food, but the newly formed partnership between his Teammates for Kids Foundation and the NBA in the personage of Paul is something Hornets fans should know about. The Teammates for Kids Foundation is in its tenth year and has already branched into nine different major league sports, one added each year, including football, hockey and soccer; pro basketball is its tenth. The foundation has already reached more than 2,000 participating athletes, but Paul will be standing up as its founding NBA member.

Paul has pledged a certain number of dollars for points scored, assists made and wins tallied, and then it is the Teammates for Kids’ job to triple that money, so the pledged amount is really in the end four times the original. But what is most telling is Paul’s own statements on his motivations, sentiments rarely heard in today’s multibillion dollar sports industry: “Everyone loves sports, but when you’re watching the Hornets and I throw a lob down to Tyson Chandler, I’ll be thinking ‘that’s a great play,’ but I’ll also be thinking, ‘I’m helping the kids.’ North Carolina is my home, that is where I was born, but I wanted to reach out here to New Orleans. Those kids out there, they’re my family now, they make me the player and person I am.”

Brooks was effusive regarding his charity’s goals and accomplishments: “The goal is to get one player from each team, 30 players, and start off from there. There are always a couple questions with any charity: Where is the money going and how much of it is actually going to the children? There is no confusion with the Teammates Foundation, 100 percent goes straight to the children. All of the overhead is privately funded, so not a penny is ever diverted away from the children. … One of our underlying goals is that we hear a lot about the bad things that pro athletes do, but these guys are wonderful, god-given talented people and they take their talent and go out and play and they do wonderful things for kids by doing that.” Needless to say, Brooks could not have picked a better man than Chris Paul with whom to make his point.

168
previous Indefensible
next A Day at the Races