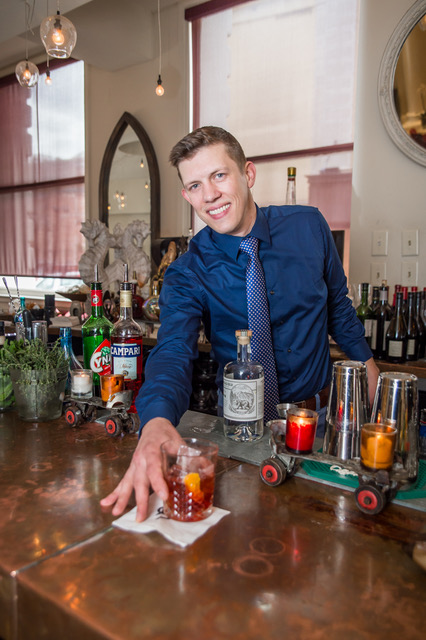 For Nick Inman, bartender at Loa (situated inside the International House Hotel), New Orleans has turned out to be the perfect landing spot. He grew up in the farmlands outside of Seattle, in a place called Enumclaw. “It´s a Native American word, which translates to ‘land of evil spirits,’” he says. “They never really got to me though. My wife is from Barcelona. Making a home in New Orleans is like meeting somewhere in the middle — it is European enough for her and rowdy enough for me.”

Inman landed in Louisiana when he received a full-ride scholarship to pursue his master’s degree in painting in Natchitoches. After receiving his degree, he traded paintings for rent and started working as an artist in New Orleans. He admits that his move from artist to bartending wasn’t necessarily a smooth transition.

“I certainly found the right home at Loa working with Alan Walter because of his artist-like approach to the bar,” Inman says. “You can tell he really loves and cares for what he does, as everything about Loa is curated to a large degree with his aesthetic. Every ingredient, combination and word on the menu is carefully chosen. Without a doubt he is the executive chef and I the line cook — I bring to life his careful concoctions for our guests to enjoy.”

And when it comes to ingredients for the bar’s special libations, Inman collects many of them himself — items such as yard eggs, honey from bees that Inman keeps and bushels of herbs. However, Inman is most excited about an orchard he planed two years ago just outside the city. “It is starting to crank out a lot of citrus, peaches and plums — great fruits to make drinks with,” he says. “At Loa, we use the fruits from my orchard regularly. I trust Alan’s judgment on how to put these pieces together, so I just show up with my produce.”

Inman’s favorite drink on the Loa menu is the Lemon Cocktail., but he says it’s hard to finesse. It starts with the juice of robust Meyer lemons, which tends to be sweeter than that of other lemons. “To the Meyer lemon juice, we add a dash of celery bitters, a tad of agave syrup and a heavy pour of 209 gin,” Inman says. “We finish it off by shaking it with gin and pouring into a coupe. If you go too heavy with one ingredient, it falls apart. Yet when you play the chord correctly, it strikes. I swear you could pull voltage from it.”

While new drinks arrive on the menu quarterly, the staff at Loa often sources ingredients that inspire drinks to be added regularly. For example, Inman is currently making an Old Fashioned using dandelion root syrup, chocolate bitters and single barrel bourbon. “That’s a pretty crazy drink, and don´t expect to see it on the menu, but definitely come in and ask me for it,” he says.

Something else to anticipate? Inman recently planted some Miracle Bush seeds in his garden that will soon find their way into a cocktail. “Miracle Bush is this bizarre plant from Africa with berries that swap the sensory relays on your tongue,” he says. “If you eat them, tart becomes sweet and sweet becomes tart. Once I harvest those berries, we’ll have the makings of an incredible drink: Have a few sips off the top; pop a berry in your mouth; and drink the rest. It will be sort of a ‘Willy Wonka and a botanist walk into a bar’ joke.”

While Inman waits for his Miracle Bush berries to mature, he is focusing on improving his speed while continuing to maintain the integrity of the drink. “Our drinks often have five or six ingredients, in many different forms,” he says. “Often we reverse dry shake an egg white. The logistics of our bar demand precision.”

In addition to incredible cocktails, Loa offers an ambience that can only be described as sexy. “Loa lends itself to people as a sanctuary — it’s a place that is easy to stumble upon and difficult to remember exactly how to return,” Inman says. “It’s elusive and seductive. You have to experience it for yourself.”

On starting a home bar: “If you want to be totally prepared, buy one mid-shelf bottle of your base spirits and two different bitters,” Inman says. “You don´t need to be like an aspiring painter who wants every single variety of green paint. Angostura and Peychauds are good places to start for bitters. You will need a muddler and a strainer. Once you get started — just remember, nobody likes a quitter.”

It’s been a long day. What drink do you pour for yourself at home? “You ever see those mechanics who themselves drive really rough, worn down cars?” Inman asks. “Or maybe the contractor who still hasn’t fixed properly the sagging floor of his own house? Those guys give their energy to others and forget to leave any for themselves. Not I. When I get home and have nowhere to be, I pour a conservative glass of bourbon and read about homesteading.”

How would you best describe bartending? “Working as a bartender is akin to hosting a great party,” Inman says. “Find the venue. Set the scene. Have a lot of fun.”