In tribute to the New Orleans Tricentennial, Martin Lawrence Gallery New Orleans is exhibiting breathtaking new paintings by modern figurative artist François Fressinier through March 9. These works of art combine collage, impasto, abstraction and figurative painting. In this way, Fressinier creates a unique textural style uniting classical and contemporary elements. “My passion is to paint the human figure in all of its intricacies of beauty and life,” Fressinier says. “I am not interested in pure realism — to have a touch of magic in my work is what I strive for.”

Fressinier was born in Cognac, France, in 1968 to scholarly portrait photographer parents with an affinity for aesthetics. Fressinier studied at the École Brassart in Tours, where he studied the drawings and paintings of old and new masters. He cites inspiration from artists like Rembrandt for showing the soul of his subjects, Van Dyke for his elegance, Bonnard for this palette and Fuchs for the fantastic world he invented. All of these elements influence Fressinier’s style today. His paintings are exhibited and collected internationally.

Martin Lawrence Galleries is known for offering a large inventory of  extraordinary works from the rare to the sublime, including paintings, etchings and linocuts from the likes of Andy Warhol, Pablo Picasso, Erte, Joan Miro, Philippe Bertho, Takashi Murakami, Rene Lalonde and Ali Golkar among others. The gallery is celebrating 41 years of fine art on Royal Street in the heart of the French Quarter. 433 Royal St., (504) 299-9055, martinlawrence.com 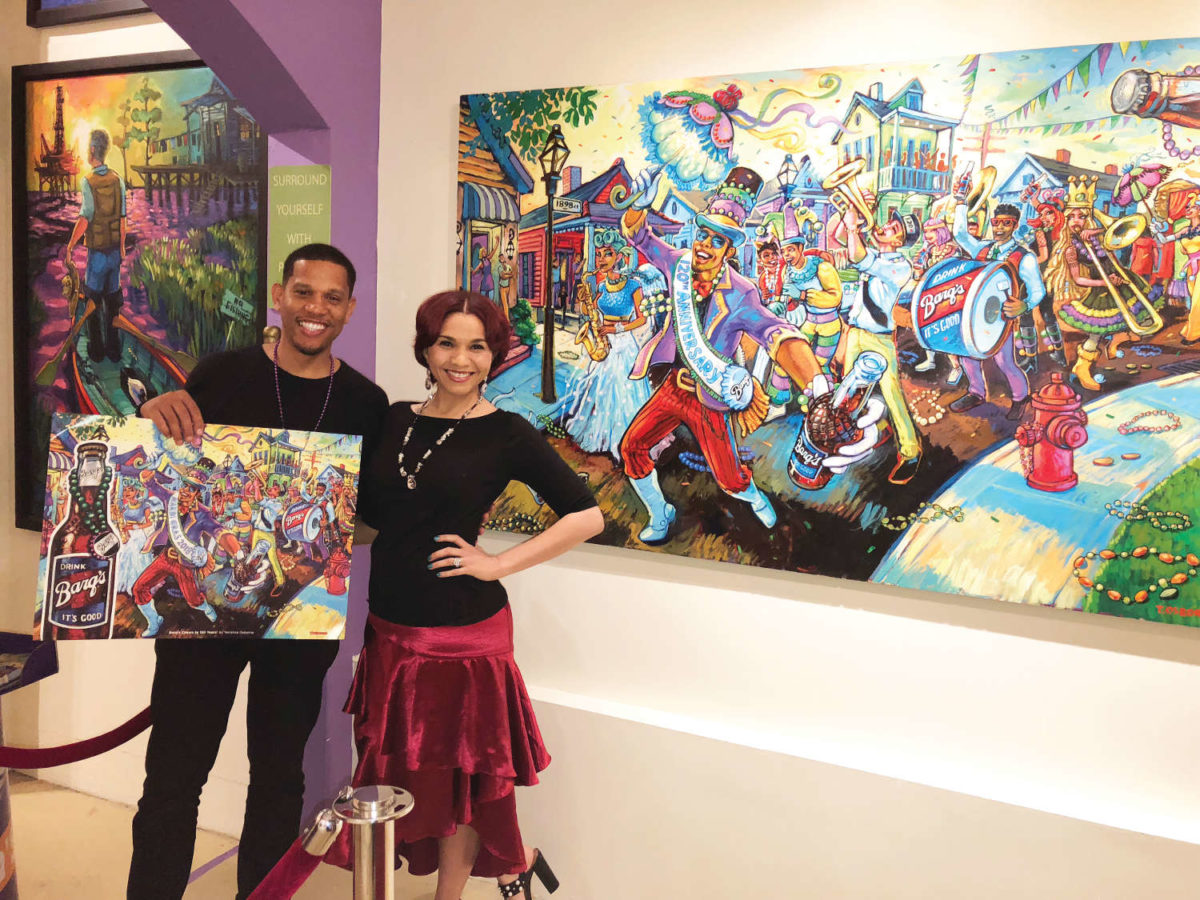 Last month, Terrance Osborne hosted a party at his studio on Magazine Street to celebrate the release of his final painting in the Mardi Barqs series in partnership with Barq’s root beer. Barq’s is celebrating its 120th anniversary this year and this partnership is a way for the company to celebrate its long heritage in the Gulf Coast region. (The Barq’s Bottling Company was founded in the French Quarter in 1890 by Edward C. Barq, Sr., and his brother Gaston. Barq, Sr., moved to Biloxi in 1897, and, in the following year, began bottling root beer.)

On the heels of last year’s painting “Soiree de Mardi Barq’s,” this year’s painting, entitled “Cheers to 120 Years,” celebrates Barq’s root beer and Mardi Gras in a festive street parade. Similar to his work from the previous two years — and in keeping with the vibrant culture found in New Orleans and the Gulf Coast — Osborne uses bright colors to capture the excitement and energy surrounding Mardi Gras.

“Barq’s, to me, is an integral part of Mardi Gras,” Osborne says. “I’m happy to be able to develop a painting that reflects that mindset and showcases the deep connection both Mardi Gras and Barq’s have with the region.” 3029 Magazine St., (504) 232-7530, terranceosborne.com

An Ode to Fashion and Carnival: The New Orleans Museum of Art showcases exciting exhibitions this spring.

If you missed Bror Anders Wikstrom: Bringing Fantasy to Carnival at the New Orleans Museum of Art during Mardi Gras, be sure to catch it this month. Swedish emigre Bror Anders Wikstrom (1854–1909) made a name for himself in New Orleans by becoming deeply involved with the celebration of Mardi Gras. The exhibition, which is on view through April 1, highlights Wikstrom’s Mardi Gras float and costume designs. Among the works of art are a full set of 20 float plates from the Krewe of Proteus 1904 “The Alphabet” parade and the only known bound set of float designs for the Krewe of Rex 1910 “The Freaks of Fable” parade. Bringing Fantasy to Carnival shows early sketches, final design plates and illustrated newspaper parade bulletins, plus photographs that show these creations rolling through the streets on Mardi Gras day.

Also on view (through May 28) is NOMA’s first fashion exhibition, A Queen Within: Adorned Archetypes, which showcases rare pieces from one of the world’s largest private collections of Alexander McQueen fashion. The exhibition explores different archetypes of femininity and features contemporary designers showcased in an immersive gallery presentation. A Queen Within uses fashion to explore seven archetypal personality types of a queen, or metaphorically, of a woman: The Mother Earth; Sage; Magician; Enchantress; Explorer; Heroine; and Thespian. The story of each feminine archetype—its powers, its weaknesses, its significance—is explored in more than 100 experimental gowns, headpieces, jewelry and shoes by more than 30 of the world’s most insightful contemporary designers. The exhibition includes designers like McQueen, Prada, Chanel and Comme des Garc?ons.

Also be sure to catch Art in Bloom 2018, one of the most anticipated springtime events in New Orleans. Themed Queen of Arts: Celebrating 30 Years of Art in Bloom, the event corresponds with the exhibition A Queen Within. Taking place March 14-18, the event will showcase spectacular floral designs created by more than 75 exhibitors. The designs will remain on display March 15-18.

This five-day event includes the Art in Bloom Patron Party and the subsequent Preview Party (March 14); and the popular Art in Bloom lecture series, and the annual Art in Bloom luncheon and fashion show (March 15). 1 Collins Diboll Circle, (504) 658-4100, noma.org