Who can forget the hysterical scene in the hit comedy Big when Tom Hanks, who plays a 12-year-old who wakes up in the body of a 30-year-old, attends a chichi cocktail party where he casually partakes of his first taste of caviar.

His reaction, one of shock, sheer disgust and bewilderment, was hilarious as he tried desperately to wipe the tiny, salty eggs from his palate. While his reaction may have been a bit of an exaggeration, caviar is one of the most polarizing foods around. Some find the pricy, highbrow delicacy simply to die for, while others would rather die than ingest it. Whether you’re a fan or not, caviar’s elegant, regal and opulent image will certainly guarantee it a place at many holiday socials and New Year’s Eve soirees.

So what exactly is the allure of this briny gastronomic pleasure, and why it is so expensive? Caviar is really quite uncomplicated considering its price tag. It’s essentially unfertilized eggs, called roe, of sturgeon that’s been brined with a salt solution (the word “malossol” on the label means lightly salted and indicates high-quality caviar). The best and priciest come from the Caspian Sea, namely Russia and Iran.

There are three classic types of caviar, called beluga, osetra and sevruga, which come from three distinct

sturgeons, thus creating a quality grading system. Beluga, the most rare and expensive variety has a rich, delicate and creamy texture and can fetch up to $150 per ounce. Beluga is so sought after that it became overharvested and nearly drove the sturgeon that produce the prized eggs to extinction; in 2005 the U.S. banned its import. Fortunately that ban has been lifted and beluga is once again gracing caviar dishes across the states. The next level, osetra, has a stronger flavor then beluga, with a somewhat nutty quality. It is typically brownish in color but also comes in a rare golden form known as royal caviar. Osetra typically ranges in price from $100 to $140 per ounce. Next is sevruga, the smallest roe, which is usually pale gray and has a creamy consistency with an intense briny flavor. It is priced around $100 to $125 per ounce.

If you’re looking for a more wallet-friendly type of caviar, then consider one of their American counterparts. The U.S. government mandates that eggs from any fish other than sturgeon must contain the type of fish on the label in order to be labled “caviar.” Therefore, a container simply labeled “caviar” will be roe from some form of sturgeon, but caviar made from salmon, paddlefish, bowfin or any other fish, must indicate the kind of fish. There are several options when selecting American-made caviar, many of which do come from sturgeon, such as lake sturgeon (similar to beluga in size and color) hackleback sturgeon (small, black eggs with a sweet butteriness) and Idaho white sturgeon. Others are made from a variety of fish, including salmon (called red caviar for its orange-red color and commonly used in sushi), whitefish or golden caviar (tiny, firm eggs that are golden or pale orange) and choupique or Cajun caviar (small black firm eggs with a lively flavor). If you’re looking to buy local, Cajun caviar sells for about $50 for a 1.5oz tin. Depending upon the grade and brand, paddlefish, the tiny grayish-colored eggs and one of the more common types of American-made caviar, will set you back about $75.

Fresh caviar, which should be stored in the coldest part of your refrigerator, does not have a long shelf life

and is best if consumed within three to four days of being opened. Due to its delicate nature, fresh caviar does not freeze well, so it’s best to buy only the amount you plan to serve immediately. When serving caviar, it’s best to avoid sterling silver spoons and dishes, as it can possibly cause your caviar to oxidize, leaving a metallic taste. Instead, it’s best to opt for natural materials such as motherof- pearl, horn or bone pieces, which are both functional and attractive. Caviar is best enjoyed when kept cold, so serving it on a bed of ice is preferred.

Caviar is traditionally served with toast points, plain crackers or small buckwheat pancakes called blini, and it is sometimes topped with a small dollop of crème fraîche. New potatoes and boiled eggs both make great canapé bases for showcasing caviar. Create a simple yet elegant hors d’oeuvre by boiling new potatoes until tender (be careful not to overcook) and, after cooling, halving each potato. With a melon baller, carefully scoop out the center. Spoon in crème fraîche, top with a quarter teaspoon of black caviar and garnish with a chive. Turn ordinary deviled eggs or raw oysters on the half shell into a gourmet delight by simply topping each with a dash of red or black caviar. The combination of caviar and smoked salmon makes an eyeappealing and tasty canapé when layered atop a croustade with a thin slathering of cream cheese. As for complimentary libations, Champagne or sparkling wine is an ideal match for caviar, as is the classic pairing of ice-cold vodka, which, due to its neutral taste, will not overpower the delicate eggs.

So with the holiday season in full swing, it’s the ideal time to head to your favorite gourmet food shop to pick up a tasty tin of caviar to make your gathering eggstra special. Who knew that so much glitz and glam, elegance and excitement could revolve around such a simple, tiny little egg? I guess it’s true that good things really do come in small packages! 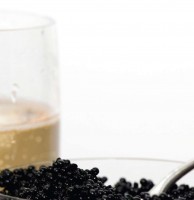