Breaking Through: A new exhibition at the New Orleans Museum of Art features the work of Puerto Rican artist Carlos Rolón.

Carlos Rolón: Outside/In, currently on view at NOMA through Aug. 26, offers a transformational and immersive experience for visitors. Rolón is internationally recognized for his paintings, sculptures and installations that break down walls. In this exhibition, he explores the connections between New Orleans, Latin America and the Caribbean — from their shared tropical landscape to the intricate wrought iron fences that define the architecture of both places.

Rolón works with materials such as shattered glass, wrought iron fences and construction cinderblocks, transforming these barriers to access into new points of entry. In this way, his artwork connects indoors to outdoors, private to public and local to global. Drawing upon popular culture, craft and art history, the exhibition examines the nature of identity, integration and aspiration in immigrant and diasporic communities across the globe.

Outside/In is a continuation of a project that began in 2016 at the Museo de Arte de Ponce in Puerto Rico. It combines tropical flora and fauna with installations composed of fences, mosaic benches and fragmented mirrors, offering opportunities for self-reflection and community engagement.

Rolón’s installation entitled Nomadic Habitat (Hustleman), is a featured component that is inspired, in part, by the prevalence of street vendors throughout New Orleans and the Caribbean. This project will be activated by local arts and community organizations at selected intervals throughout the run of the exhibition. It speaks to themes of class, commerce, immigration and survival. Other activations will include displays by local artisans, language meet-ups and cross-cultural exchanges, plus projects by artists and creative collectives in the city. Additional related programs include curator-led noontime talks, gallery tours, artist perspectives and performances by Taco Truck Theater/Teatro Sin Fronteras. 1 Collins Diboll Circle, (504) 658-4100, noma.org

New Orleans, the Founding Era, which recently opened at THNOC and is on view through May 27, explores the complicated nature of New Orleans’ birth and the early years of the French settlement. The exhibition, which is supported in part by Whitney Bank and Arnaud’s Restaurant, includes a companion book published in English and in French by THNOC. Both the exhibition and the book focus on the perspectives of those living in and around the settlement, including the native populations, enslaved Africans, and willing and unwilling European settlers. The book contains essays from eight scholars of the French Atlantic World describing the different populations who inhabited precolonial New Orleans and the forces driving the settlement’s growth.

Large-scale reproductions and digital interactive items complement 135 original items (including more than 75 objects on loan from organizations in Spain, France, Canada and around the United States).

“The catalog, like the exhibition, is a scholarly marvel that reconstructs the early years of the city by examining the lives of those who were here,” says Vincent Sciama, consul general de France en Louisiane. “These stories compose a portrait of the fascinating and often harrowing experiences of those people who were present in the first few decades of the city’s existence. Together, the perspectives of these groups reveal the common story of the founding of this great city and underscore the lasting diversity that continues to make it a city like no other.”

Boogie on Down! The 35th Annual French Quarter Festival returns to New Orleans this month. 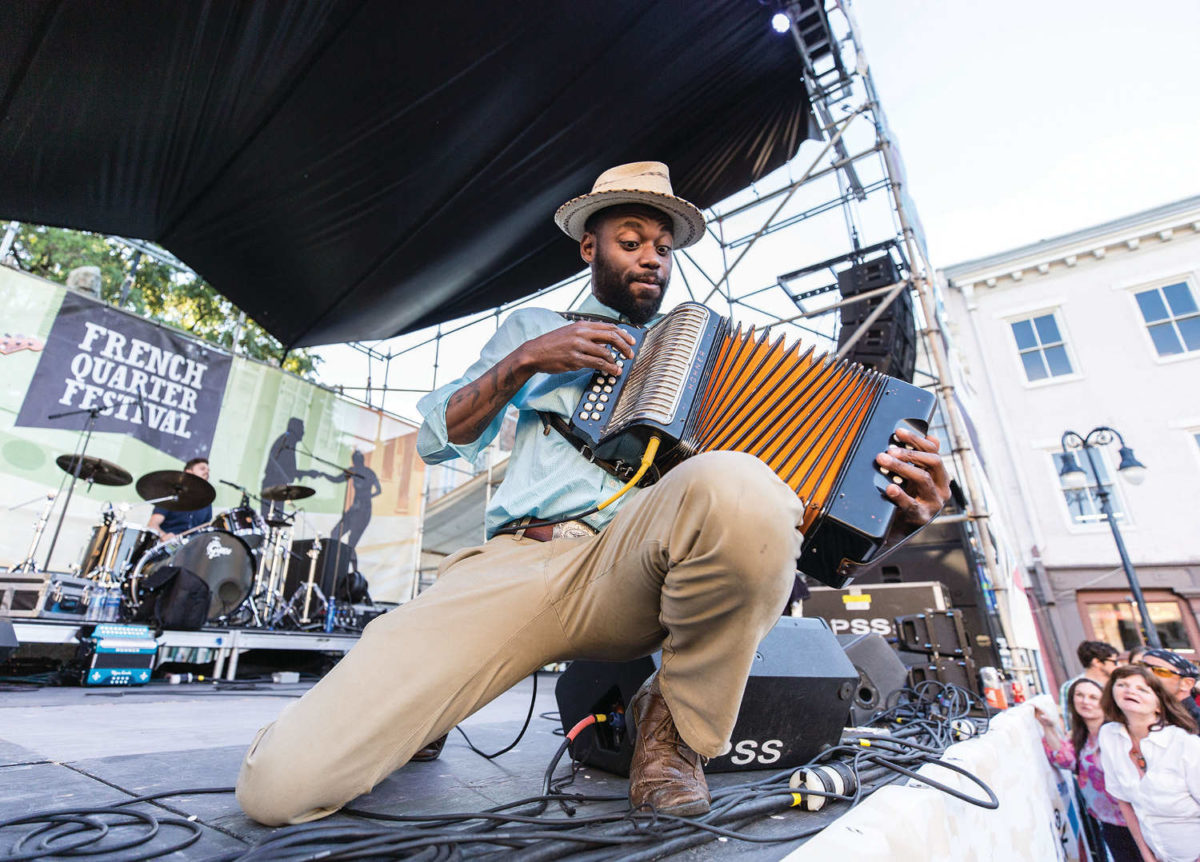 This year’s French Quarter Festival, presented by Chevron, takes place April 12-15 with a record-number of music debuts, new restaurants, VIP experiences and Tricentennial celebrations. This free festival showcases Louisiana music, food and culture, and will feature music from more than 300 acts (including nearly 30 new acts) on 23 stages, more than 60 local restaurants and a bevy of special events.

At the riverfront Abita Beer Stage, catch four days of music from the likes of Brass-A-Holics and Sweet Crude, and, on the Jack Daniel’s Stage, listen to the music of Erica Falls; Shamarr Allen and the Underdawgs; and Zydefunk. Meanwhile, the Chevron Cajun-Zydeco Showcase will turn Decatur Street into a dance party with performances from Amanda Shaw; Chubby Carrier and the Bayou Swamp Band; and Dwayne Dopsie and the Zydeco Hellraisers. The always-popular Popeyes Brass Band Jam will bring three full days of brass bands to the New Orleans Jazz Museum at the Mint with performers such as Treme Brass Band, The Original Pinettes Brass Band and Leroy Jones’ Original Hurricane Brass Band. Also, now with the 100 block of Bourbon Street re-opened after months of construction, the FQFI team is bringing music to the new Gateway to Bourbon Street Stage. Artists include Kid Simmons Jazz Band, Paulin Brothers Jazz Band and The New Orleans Jazz Vipers.

For a truly VIP experience this year, be sure to check out the Nola.com Fest Family Experience, which includes a hospitality lounge, an elevated viewing stand near the Abita Beer Stage, private bars, refreshments, air-conditioned restrooms, merchandise discounts, memorabilia, exclusive programming and more.

Of course, incredible food also is on the menu with everything from classic New Orleans dishes to contemporary options on offer. In addition to a number of restaurants that have been with the festival since its beginning in 1984 (such as Antoine’s, Pat O’Brien’s, Trey Yuen, Tujague’s, Vaucresson Sausage, Desire Oyster Bar and Court of Two Sisters), new restaurants being featured this year include Cafe Beignet, Café Dauphine, The Company Burger, The Daily Beet, Flamingo A-Go-Go and SoBou.

As an official Tricentennial event, the 2018 French Quarter Festival will offer several ways to commemorate the anniversary. The Tricentennial Homecoming Pavilion will be located near the Jack Daniel’s Stage with exhibitions showcasing New Orleans notables throughout history, a hospitality lounge and the One Time in NOLA story booth.

Special events include the Second-Line Kickoff Parade (April 12 at 10 a.m. traveling from the 100 block of Bourbon Street to Jackson Square); Let Them Talk: Conversations about Louisiana Music presented by Jones Walker (April 14-15 with presentations and performances at the Jazz Museum at the Mint); FQF Film Fest presented by NCIS: New Orleans (April 14-15 at Le Petit Théâtre du Vieux Carré with films about Louisiana and Louisiana musicians); and more. (504) 522-5730, frenchquarterfest.org