A Smalls Change Is Coming

Spinal Tap’s legendary bassist, Derek Smalls, celebrates the release of his first solo album, Smalls Change (Meditations Upon Ageing) and joins forces with the Louisiana Philharmonic Orchestra for his Lukewarm Water Live: An Adventure in Loud Music tour at the Saenger Theatre. 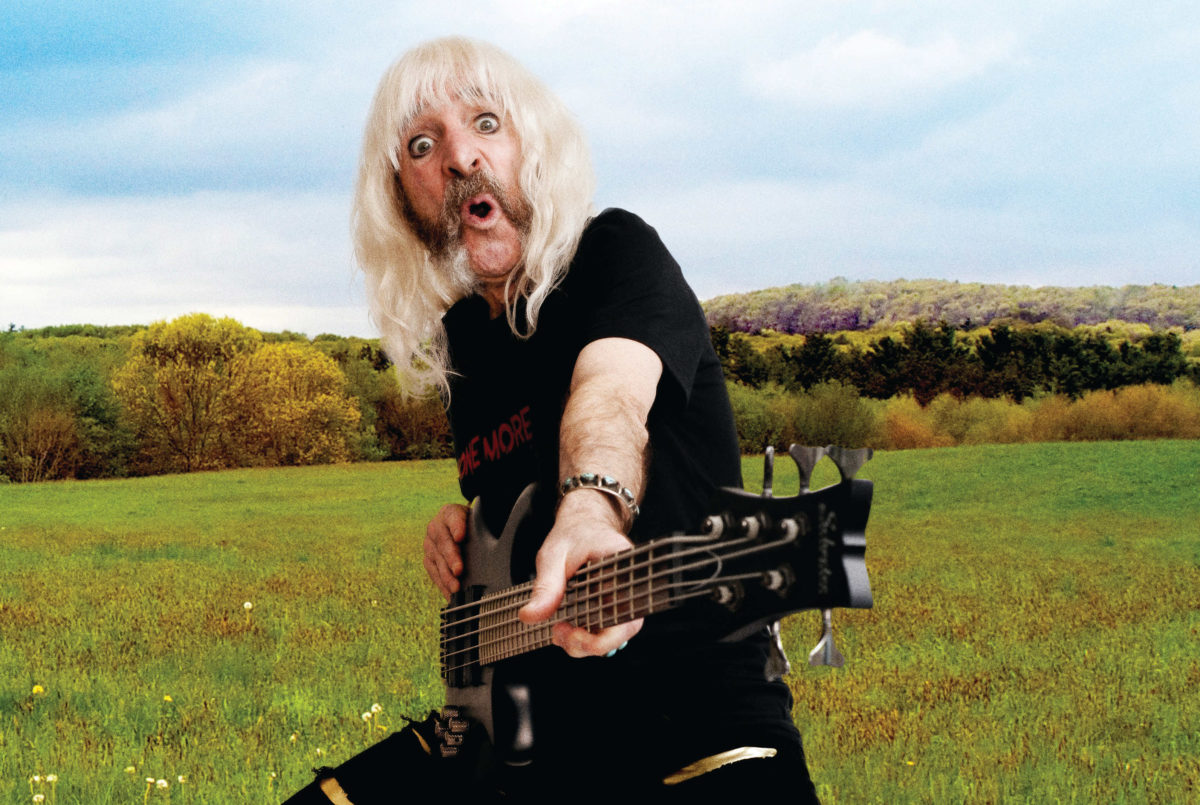 Bass player Derek Smalls made his indelible mark on the world of music as a member of the storied heavy metal group Spinal Tap, known as England’s loudest band and made famous by the 1984 film This is Spinal Tap. Now the cucumber pants-stuffing rock demigod is set to release his first solo album, Smalls Change (Meditations Upon Aeging), on Twanky Records/BMG April 13. Described as ‘a poignant and oftentimes furious contemplation on aging that explores the passing of time and all things loud,’ Smalls’ album is chockful of performances by some of the greatest musical talents of all-time, including Donald Fagen, Rick Wakeman, Jeff “Skunk” Baxter, Larry Carlton, Paul Shaffer and The Hungarian Studio Orchestra. Smalls is also launching his tour, Lukewarm Water Live: An Adventure in Loud Music in New Orleans April 14 at the Saenger Theatre, where he’ll be accompanied by the Louisiana Philharmonic Orchestra.

“The key word is ‘live,’” says Smalls of his Lukewarm Water Live tour, which will run in other cities besides New Orleans this year, including Atlanta with the Atlanta Symphony Orchestra and in Washington, D.C., with the National Symphony Orchestra. “It’s very exciting to me that it kicks off in New Orleans, the city that is home to so many ‘musics,’ and it seemed that we might find a home here as well,” says Smalls, who claims that the impetus to bring the show to New Orleans was the eagerness of the Louisiana Philharmonic Orchestra to get involved. “It was them that really just jumped right in and said, ‘Please, us, please can we do this?’ and so they were first in line, so first gets the privilege.”

Small’s brand new solo effort, Smalls Change (Meditations Upon Ageing), will be released the day before his show at the Saenger Theatre. “So it’ll probably be the biggest record release party ever because it’s got the LPO, which is 60 or 70 people in tuxedos and gowns, and I don’t think you see that at the normal CD release party,” Smalls says. “And there will be amazing surprises as well at the show and some stage effects that I think have never been seen in this part of the United States before. It’ll be a major kind of coming out party except not with any debutants — guaranteed no debutants.”

Included in the impressive lineup of all-star performers on Smalls Change, such as Steve Vai, Joe Satriani, Steve Lukather, Waddy Wachtel, Dweezil Zappa and Richard Thompson, is New Orleans’ very own talented songstress and pianist Judith Owen. “She was recommended to me from the British Fund for Ageing Rockers,” Smalls says. “Their grant made it possible to help fund the record, and they said she performs opera apparently from time to time, so she was named as somebody who could be the opera singer on this track called Smalls Change, which is basically the origin story of how I came to be a solo artist, with hopefully not a solo audience. Smalls Change was the first video, and I don’t know if it’s going to be a single. I think the singles will be some of the more ‘rocky’ songs as opposed to the grandiose pieces with the orchestra. But I don’t run the record company, so I don’t know.”

The song “It Don’t Get Old” off of Smalls Change is a reflection of the pointless encounters that come with life on the road. “If you’re not at the very top of the business, where you’re just going about from limo to private jet, and the fans are just this adoring blur that goes by you on your way to the next Champagne supper, it can get a little grungy in there,” Smalls says. “So it was like looking at both sides of a different coin. It can be grungy; it can be depressing; it can be disgusting, but it don’t get old. You can consider the alternative of sitting in a home with a blanket on your knees.”

Smalls is hopeful about taking the lead onstage with his new solo career after his years in Spinal Tap. “In Tap, I was playing bass in the lineup not quite where the drummer is but not at the front,” Smalls says. “You get nervous about being at the center mic and being the focus of all the attention, and all that can give you the runs, but what they never tell you is the lights are so much brighter there and you’re always warm. Back where I used to be, you could get cold, and as you grow old, you get more sensitive to the cold, but up there in the front, the light is always warm. Lukewarm water is getting warmer, maybe even all the way to tepid.”

Former Spinal Tap bandmates Nigel Tufnel and David St. Hubbins have weighed in, sort of, on Smalls’ new solo project. “Nigel said he heard it, and he sent a very complimentary note, ‘Very well done, mate,’ I think were the exact words,” Smalls says. “I told him if he wanted to play on it he was welcome but he literally has his hands full; he is deep into animal husbandry, raising miniature livestock. He’s got these miniature goats he’s raising and Nigel, as you may know, is a fairly excessive type of person. That’s why I call him ‘Fire’ and David is ‘Ice.’ And as an excessive person, he doesn’t know when to stop, which was great when he was playing onstage because he didn’t need to stop. But as a breeder, these miniature goats are now too small to be milked. I don’t know if David’s heard the record, all I hear from him is an occasional letter by post and it’s letters that just contain Chinese pictograms. So I don’t know whether he’s saying, ‘Good job, mate,’ or ‘Let’s get back together,’ or ‘Dim sum for three, I’ll have the duck.’ But there is never any animosity when Spinal Tap splits up; we’ve done it many times. We’ve gotten back together for gigs or a tour or whatever and then it just fades away again. It’s like the end of an old movie — we don’t implode with a bunch of yelling and screaming and throwing things. It just fades slowly away and it fades back up, or it doesn’t.”

Smalls’ voice softly cracks at the mention of the popular documentary film This is Spinal Tap, made by Marti Di Bergi, which chronicled the band’s breakups, reunions and mishaps, including several drummers that tragically perished in super strange circumstances. “The film is a hatchet job,” says Smalls of Di Bergi’s work, even though it put Spinal Tap on the rock and roll map. “You’re doing, I forget, a 26- or 28-city tour of the United States, and this bloke who says he’s your biggest fan is following you about with a camera at all your concert dates. And 99.92 percent of the time, we found our way to the stage just fine, but you don’t see that in the film. That’s an agenda! This is warped. But I think I understand it; he was a big fan of the band; he wasn’t lying about that, but I think he thought that after 17 years together at the time we still hadn’t really gotten big and he thought the key to the success of the band is to turn them into a laughing stock. So that was his agenda. And we were his playthings.”

New Orleanians claim they’ve seen Smalls around town, soaking up the rich metal ambiance at The Dungeon, petting puppies at The Louisiana SPCA and digging around in the ointment section at the Wal-Mart Supercenter on Tchoupitoulas Street, but Smalls says that none of that is true. “I’ve only come down to New Orleans a few times just to go over technical aspects with the Louisiana Philharmonic Orchestra and to discuss various stage details for the show,” Smalls says. “A symphony gig is not like a standard rock show. There are all sorts of different limitations, and, like life itself, there are things taken away and things that are given. Oh, New Orleans is a great place to eat. I’m a po-boy freak! I’ll get my hands on one of those and it’s ‘goodbye’ for the afternoon. And New Orleans reminds me of Central Europe. I’ve spent a lot of time in Latvia and Albania the last few years and New Orleans reminds me of a happier, jolly Albania.”

Smalls has a message for New Orleanians contemplating buying a ticket to his show. “If these people were fans at all of Spinal Tap, and they don’t buy a ticket, then what they are going to miss is two hours plus of top-volume entertainment,” Smalls says. “The subtitle of this show is ‘An Adventure in Loud Music’ and we will take you from the grungiest, hardest, metal-based rock — as few chords as humanly possible — all the way to the most grand, progressive type of ‘anthem-ic’ rock, so it’s really a tour of all the kinds of music that has fascinated me and I think has bewildered others. I’m very excited about New Orleans because it seems to me it has always welcomed music of all stripes, even music without stripes or even any kind of decor. And I’ve seen pictures of the Saenger, and it’s a beautiful theater, the kind of theater I’m not too proud to say I think I belong in. It’s historic, so it’s like being part of history and yet being here in the present day all at once. It’s hard to figure out but it’ll be fun, plus you’ll have ringing in your ears.” hyperurl.co/dsmallschange, lpomusic.com, @smallslife

171
previous Mommy-ing in the Digital Age
next Chris Reams