Bring on the Bucha! 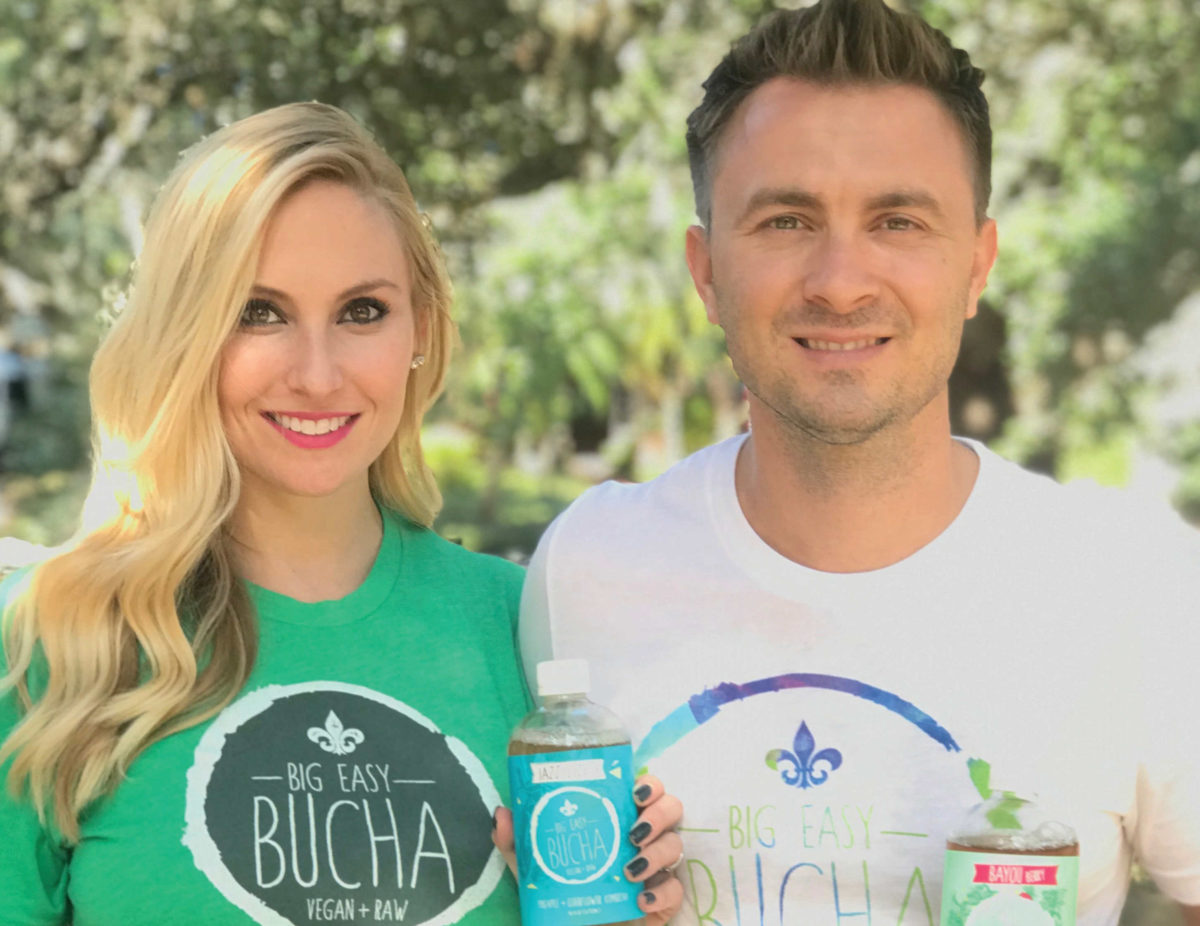 Austin Sherman and Alexis Korman, the adorable husband and wife co-founders of Big Easy Bucha, aren’t originally from New Orleans, but they got here as fast as they could. Sherman, who is from Tampa, Florida, and Korman, who was born in Canada, both moved here about six years ago and met each other shortly thereafter. “We fell in love with the city first and then each other,” Korman says. The duo launched Big Easy Bucha in 2014, and they now offer seven different flavors of kombucha (with more on the way this fall).

“Kombucha is a sparkling, probiotic tea that’s low sugar, low calorie and lightly effervescent,” Korman says. “It is enjoying a renaissance today even though it’s an ancient beverage — it’s wonderful for digestion, immunity and some say hangovers.”

Korman has been drinking the beverage for about 10 years and swears by its benefits. “A vegan friend told me about it, and, after a few sips each day, I was amazed at how differently I felt,” she says. “I kicked a serious Diet Coke habit using it as a soda replacement.”

So after Sherman’s sister taught him her recipe (kombucha is widely made as a home brew), he developed some beautifully soft and floral flavors that are unique in the kombucha industry. While many brands are known for having a strong vinegar taste, Big Easy Bucha is delicious and easy to drink. “Big Easy Bucha is widely thought to be the gateway kombucha, and we’re happy to hear that,” Korman says. “As a culinary city in an agriculturally rich state, we got excited about creating a uniquely Southern kombucha brew, sourcing ingredients from small, regional farmers. We started super small, and we are humbled to now have products on the shelf in 14 states today.”

While Sherman and Korman were a bit scared to start a business from scratch, they were excited for the possibilities. They felt strongly that New Orleans was ready to embrace its own local kombucha brand, and they were just the two to deliver it. “It has been an incredible rollercoaster,” Korman says. “When you own your own business, the buck stops with you, so ultimately you’re on 24/7 and it’s both challenging and rewarding. We have learned to celebrate even the smallest victory. Thankfully, kombucha makes for a great cocktail mixer!”

“We have an on-staff forager, Danny Milojevic, who has great relationships with local farmers and scouts some incredible produce,” Korman says. “Sometimes customers drive us to test new flavors. Other times, it’s our staff — the apple pie idea came from head brewer Paul Zeringue, who is an active home brewer and incidentally, also deaf since childhood. A portion of the proceeds from that new flavor will benefit a deaf charity in the region.”

While Korman has been drinking a lot of Basin St. Blues lately (she says there’s something pretty magical about the mayhaw flavor), she also notes that their biggest sellers change geographically. “In our Publix stores throughout the South, Bayou Berry does best,” she says. “In the Northeast, it’s Geaux Green. And in the Northwest, they’re loving Streetcar Sipper. Every region seems to have its own palate.”

Big Easy Bucha is located in the space previously occupied by Good Eggs, featuring a tap room where folks can stop by Monday through Thursday to taste through the lineup and see how they make their kombucha. “On a good day we can produce about 15,000 bottles,” Korman says. “We recently invested in a more automated filling line, which is pretty crazy to see since we used to fill and label every bottle by hand.”

Be sure to swing by Big Easy Bucha May 18 for the Saved by Bucha event. This after-hours brewery event kicks off at 7 p.m. with kombucha cocktails benefiting the LASPCA ($1 from each drink will be donated), a screening of Saved by the Bell episodes, a ’90s costume contest, a kombucha case sale and vegan diner food by Rolls & Rock. 4040 Euphrosine St., bigeasybucha.com

1.41K
previous Getting in the Spirit
next Geoffrey Meeker