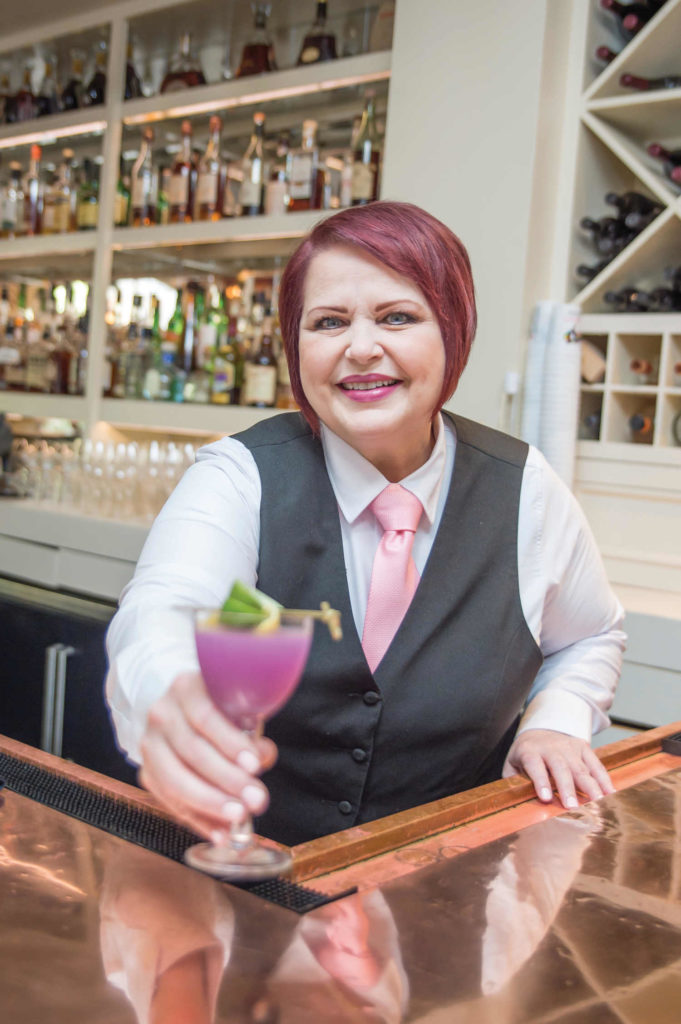 If you haven’t met Lu Brow, lead bartender at Brennan’s, then it’s time to head over to the infamous restaurant — stat! The beverage team at Brennan’s is now officially all women! Brow, who is originally from Shreveport, moved to New Orleans in 2004 and started working at Brennan’s in 2014 (just after its renovation).

“I had previously been behind the bar at Cafe Adelaide and the Swizzle Stick Bar — part of the Commander’s Palace family of restaurants,” Brow says. “I had always been a fan of Brennan’s, and I was ready for a change. I knew the re-opening of one of the most iconic restaurants in the Quarter was going to be very exciting, so I was thrilled to come onboard. I have always had so much respect for the Brennan’s family name and what it represents in the city. I’m happy to call The Roost [Bar] at Brennan’s my perch!”

The ambience at Brennan’s lives up to its status as a grande dame of New Orleans cuisine, and its iconic space on Royal Street pays tribute to its traditional past while also offering modern day flair. “[Brennan’s] attracts a celebratory crowd, and it’s my goal to help guests celebrate everything from an anniversary to a sunny afternoon,” Brow says. “I always want our guests to feel valued and comfortable, especially when it comes to their cocktail choice.”

When it comes to cocktails, there’s always something new hitting the menu. Before every season, the bar staff submits cocktail ideas. Then they gather together to taste and discuss each of the concoctions. “We talk about what other components we think the cocktail needs, if we think the cocktail is ready to debut for that season and more,” Brow says. “Tasting amongst ourselves is a great opportunity to work together and collaborate creatively — and it’s a lot of fun!”

Among her favorite cocktails at Brennan’s, Brow personally loves the Wild Yamagishi (named after Japanese guitarist June Yamagashi). According to Brow, it’s made with Hakushu single malt Japanese whisky (a soft and beautiful whisky), Bénédictine, Chartreuse (adding a nice spice/pepper element), Peychaud’s Bitters (for that NOLA flair) and the shiso leaf (with a white pepper aroma). “A current favorite on the menu the Iris Cocktail,” Brow adds. “I love the purple color that is imparted by the butterfly pea tea. It is a refreshing opener for the spring season to enjoy out in the courtyard at Brennan’s among the greenery and colorful pink umbrellas.”

And let’s not forget the famous Turtle Parade — an annual tradition at Brennan’s, being held this year May 12 — that features floats, bag pipes, police escorts and more (all ending with a festive reception at Brennan’s). The parade is held in celebration of the 10 mascot turtles in the courtyard (dubbed “The Mothas and the Othas”).

“To honor our green friends, we cheers with a green favorite — the classic Grasshopper cocktail with green crème de menthe, white crème de cacao and cream,” Brow says. “Party goers will also enjoy the Caribbean Milk Punch — a great “eye opener” after the festive morning parade. The spring cocktail menu will debut soon, and you’ll certainly find the Iris Cocktail on there with butterfly pea tea. We are playing with some ingredients and tweaking the menu components, but we always feature fresh local produce and herbs — my favorite being the juicy Ponchatoula strawberry.”

Brennan’s also is dubbed the “The Champagne House of the South,” and that means Champagne sabering in the courtyard every Friday at 5 p.m. Bubbles at Brennan’s happy hour is Monday through Friday with special deals on Champagne cocktails, bottles and bites from James Beard Award finalist chef Slade Rushing.