Local real estate firm Felicity Property Co., with the help of Bell Design & Architecture and the team behind St. Roch Market, has taken the dingy ground floor of a two-story property in the Warehouse District and transformed it into a bright, delightful “contemporary” food hall. 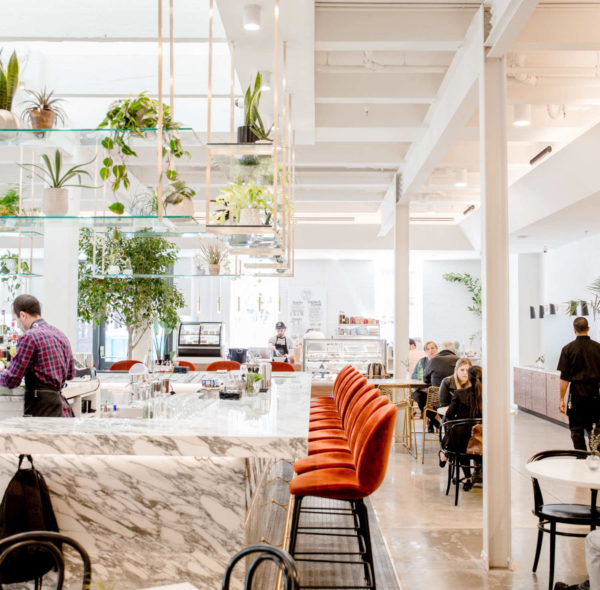 Built over 120 years ago to house Tinker Copper and Iron Works, the building on the corner of Magazine and Julia streets now houses one of the city’s newest food halls. With a name derived from the building’s previous tenant, New Orleans Auction Galleries, Auction House Market is another creation from Will Donaldson and Barre Tanguis, the pair behind St. Roch Market on St. Claude Avenue.

Though the building’s renovation, specifically the second-story lofts, was primarily handled by studioWTA, the market itself is the work of Megan Bell and Lindsay Butler of Bell Design & Architecture. With almost 9,000 square feet of space, Auction House Market is similar in many ways to its sister St. Roch with its high ceiling, pristine white walls and light-colored marble, but the differences stand out. “Every meeting that we had that discussed design included a member of the St. Roch team,” says Bell. “I think it was a combination of their influence and the fact that our aesthetics sort of align with theirs anyway.”

The main focal point, and what many consider the market’s best feature, is the marble bar centered smack in the middle of the hall under a light well that reaches all the way to the roof. “It was the natural place to put a central gathering spot” says Bell. Above the bar is shiny brass and glass shelving lined with potted plants that bask in the illumination from the light well. The original design for the bar was vastly different than the end result, a change that came about after analyzing 3D renderings of the project. “The 3D rendering process really helped with that because we’re not always able to visualize things as well as we’d like and often clients have an even harder time with it because it’s not what they do everyday,” says Bell. “It’s an extra service that takes a lot of time, but it really helps people make the right decisions.”

Auction House Market made ample use of our area’s trove of skilled artisans in its design. All of the brass shelving above the bar was done locally by E. Kraemer Fine Metal and Woodwork in New Orleans. “Anyone who’s doing brass work in town knows them because they’re brilliant at it.” says Butler. Mandeville-based Avalon Marble LLC did the marble bar installation and tabletops, and WoodWorkers Construction Inc from Picayune, Mississippi crafted the oyster bar front of rounded walnut dowels, adding an almost tropical-like element to the design. “Some things are unexpected,” says Bell. “It’s not always intentional, but it is always great when things come together.”

One of the major challenges in creating the Auction House Market was managing the building systems that drop down from the residential spaces above. By working closely with the engineers involved in designing the lofts, they were able to push a lot of the plumbing, mechanical and electrical works to the perimeter of hall. “We wanted to keep the center of the space as open and airy and as high as possible” says Butler, “Though it is a technical difficulty, it’s one of those things that are really hard to get organized. We realize no one will probably notice it, but we appreciate it so much.”

More than 1,000 square feet were dedicated to providing a full commercial kitchen for the eleven vendors at Auction House Market. Bell Design & Architecture were able to flesh out what was needed and where with the help of a kitchen consultant. “The folks at St. Roch basically told us what equipment they needed, how it works and how it should be set up.” says Butler. Each vendor has a prep table and both cold and dry storage spaces, like at St. Roch Market, in an attempt to lessen the situations that can arise when people share a common area. “I think what we did was an improvement over what they have at St. Roch,” says Bell. “The design at St. Roch evolved when they were figuring out the use of the space. As a result we were able to benefit from what they learned and were able to improve on that.”
https://www.auctionhousemarket.com/

Currently, the vendors at Auction House Market include familiar sellers from St. Roch like Coast Roast Coffee, The Mayhaw, Elysian Seafood and Empanola, but there are several newcomers as well. Tracey Davenport and her husband Dave Kirtland have created Aloha Lei featuring flavors from the Pacific Rim like sushi and poke. Egyptian couple Chris and Sandy Minias run Alpha, serving an eclectic array of Mediterranean cuisine from hummus and baba-ganoush to gyros and baklava. With a focus on healthful eats, HappyJaxx from Chef Patrick Kearney offers inventive and delicious salads, toasts and teas while Mac & Moon offers plant-based treats like their vegan macarons. Sola Deli, operated by Camdon Richardson, is an “internationally-inspired and Louisiana themed” delicatessen with cooked and cured meats and house made accouterments, and finally there’s Tava, an Indian dosa concept from Chef Manish Patel.