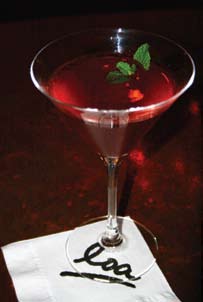 ’Tis the season for pomegranate. Harvested in the Northern Hemisphere from September to January, pomegranates can be enjoyed year-round thanks to companies that bottle the juice fresh. With zest and health in mind this winter, you can concoct your own pomegranate cocktail.

Originating in Persia, the pomegranate was brought to California by Spanish settlers around 1769. The name “pomegranate” derives from the Latin pomum, meaning “apple,” and granatus, meaning “seeded.”

Known as the fruit that caused Persephone, the Queen of the Underworld in Greek mythology, to be trapped in Hades for months and thus bringing about the season of winter, pomegranate has been part of ancient lore since the third century BC. In Greek culture, the fruits are traditionally broken on the ground at weddings and New Year’s celebrations.

Called a “superfruit” because of its nutritional content and antioxidant properties, pomegranate is being evaluated for uses in fighting various cancers, cardiovascular disease and the common cold. High in vitamins C, B5 and potassium, this tart and juicy fruit pairs well with food and drink alike.

Pomegranate has been elevated from its previous inception as grenadine into a variety of uses for drinks of all kinds. The perfect companion to margaritas, mojitos, martinis, champagne cocktails and even mulled wine.

For a dramatic holiday libation try one of these distinctive recipes!

Slice citrus into ½-inch rounds and stud with cloves (easier to strain them later). Add all ingredients to a Crock-Pot or large saucepan. Bring to a low simmer for 30 minutes and serve warm (punch bowl with ladle and handled glassware is always stunning). Experiment with spices, fruits and nuts to create your own holiday specialty.

Add all ingredients to a mixing tin. Add ice, shake and strain into a V-shaped glass. Garnish with a few arils (available already peeled at Whole Foods) and/or a sprig of mint for festive color contrast.

139
previous Fated Glory
next Great Places to Dine for Duck