The Importance of Annual Checkups 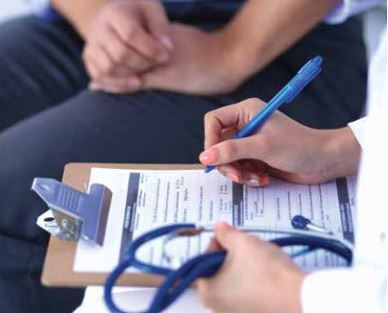 According to the U.S. Agency for Healthcare Research and Quality, men are 25 percent less likely to visit their healthcare providers than women, and they are 40 percent more likely to have skipped recommended screenings. Research from Harvard Medical School on the gender gap in health revealed that women live 5.1 years longer than men with more than twice as many men than woman dying from chronic diseases or conditions (heart, cancer, hypertension, diabetes) and HIV. Referred to as “the ostrich mentality” or “John Wayne Syndrome,” the men who skip tests and treatment, minimize symptoms and disregard medical advice are living shorter lives.

Touro’s Brent Becnel, a board-certified family nurse practitioner with a doctor of nursing practice, has made it his goal to change the way men perceive health. “Men do not take health issues seriously,” he says. “Most of them do not participate in their annual check-ups or wellness visits. What is most frustrating is that many of my male patients cannot answer a simple question, such as ‘What type of medication do you take?’ Most of them have their spouse answer the question for them.”

It is recommended that men over the age of 40 get a blood pressure screening every one to two years, a diabetes screening every three years and a cholesterol screening annually. Colon, prostate and lung cancer screenings are also recommended based on the patient’s history. “Often it takes a significant health issue, such as a heart attack or stroke, to get male patients in for an office visit,” Becnel says. “If men participated in more health screenings, it could help save their lives. Screenings help us detect certain types of cancers and other health issues before there are symptoms or signs.”

Most of these screenings can occur during a patient’s annual check-up or wellness visit. For example, Becnel describes an increase in male office visits after a testosterone commercial aired. “Awareness is a key to prevention,” he says. “Low testosterone and/or erectile dysfunction may be an indicator of a more serious condition, such as cardiology concerns, high blood pressure or diabetes.”

According to the Centers for Disease Control, HIV cases in the Southern states accounted for more than half of new HIV diagnoses in 2016. Out of the top U.S. cities with the highest rate of HIV infections, New Orleans and Baton Rouge, rank No. 2 and No. 3, respectively. “HIV will continue to spread in Louisiana unless we do something about it now,” Becnel says. “Men, especially in the LGBTQ community, are not comfortable speaking about HIV because of the negative stigma associated with HIV. By avoiding the subject of HIV and other sexually transmitted diseases, they are missing out on getting help.”

Pre-exposure prophylaxis, or PrEP, is a way for people who do not have HIV but who are at substantial risk of getting it, to prevent HIV infection by taking a pill every day. The pill is Truvada (approved by the Food and Drug Administration in 2012), and it provides 92 to 99 percent reduction in HIV risk for HIV-negative individuals who take the pill every day as directed. When someone is exposed to HIV through sex or injection drug use, Truvada works to keep the virus from establishing a permanent infection.

Healthcare providers prescribe PrEP for men who have sex with men or anyone who is in a population group at risk for HIV infection (IV drug users, people with multiple sexual partners and those with a prior sexually transmitted infection). In order to qualify for PrEP, the patient must be tested negative for HIV.

“We do a full disease workup, testing the patient for sexually transmitted diseases (HIV, Herpes, Chlamydia, Gonorrhea, Syphilis), a full chemistry panel (to check glucose levels and electrolytes) and check to make sure the patient’s kidneys are working properly,” Becnel says.

Patients who use PrEP must commit to taking the medication daily and seeing their healthcare provider for followup every three months for blood work. “It is important to note that Truvada usually takes seven days to infiltrate rectal tissue and two to three weeks for vaginal tissue, Becnel says. “Although it is extremely effective, Truvada only protects against HIV infection — not other STDs.”

When asked what advice he would give to his patients, Becnel says he has two reminders. “When it comes to health, preventive maintenance is less expensive than major breakdown, and, just because an issue is not talked about, it does not mean it does not exist.”