Man on a Mission

Adam Ambruso stars in and produces the Sony Pictures award-winning film Butterfly Caught in the wake of the Me Too Movement. 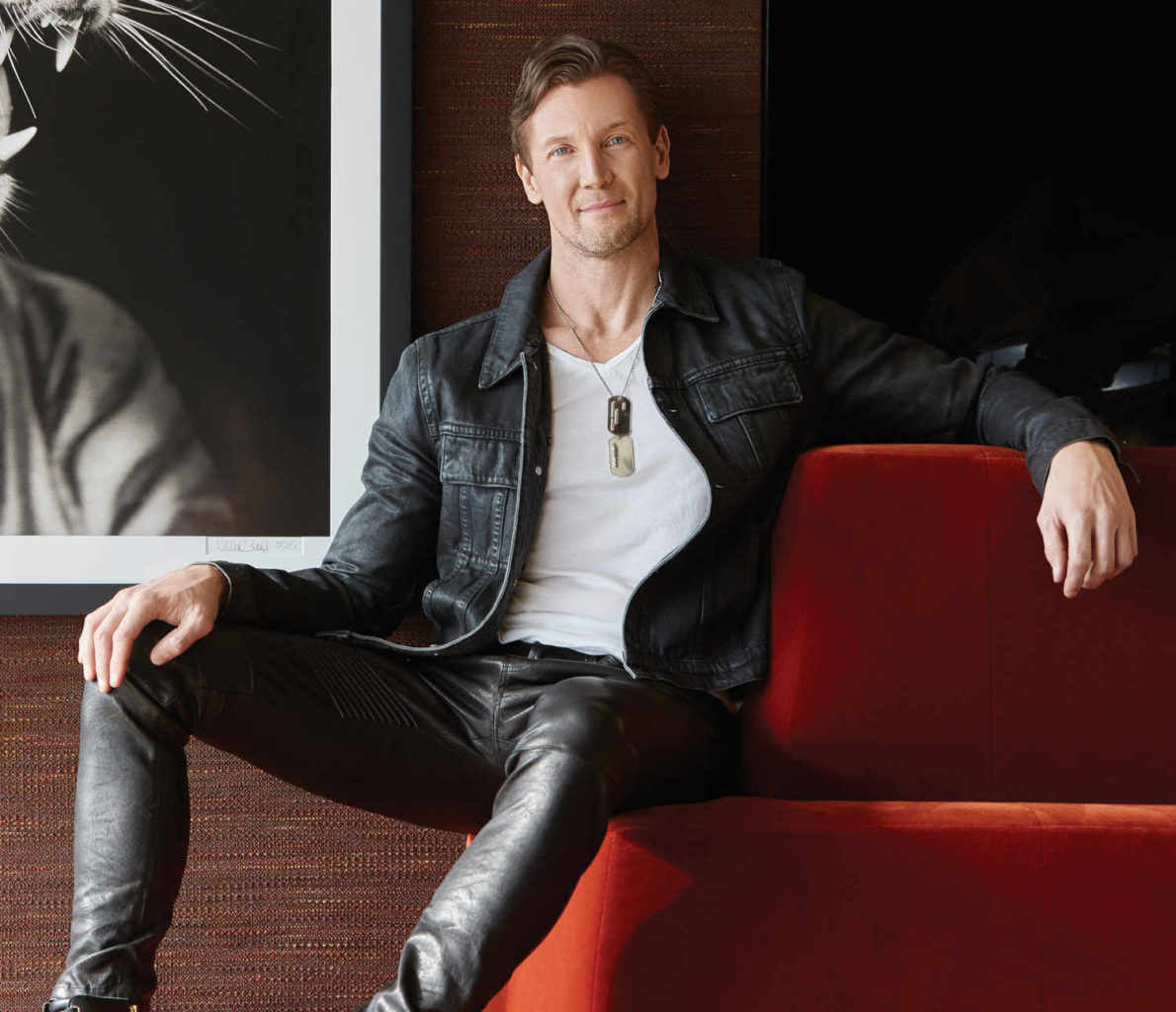 Actor and producer Adam Ambruso is a man on a mission. The native Texan left home shortly after college at the University of Texas at Austin and planted roots in Los Angeles, determined to make it as an actor. When a Hollywood bigwig propositioned Ambruso for sexual favors in exchange for furthering his career, he turned the situation around and went on to score roles in films including the drama Running Wild opposite Sharon Stone and the SyFy original horror-sci-fi Atomic Shark. It’s no surprise that Ambruso wanted to play the role of Randy in the highly anticipated upcoming Sony Pictures film Butterfly Caught, written and directed by Manny Rodriguez, Jr. The film centers on three young women and the lengths they’re willing to go to achieve their dreams of hitting it big in glamorous Tinseltown — a city that often foists its seedy underbelly on naïve newcomers, and victimizes those seeking fame and fortune.

“If you make mistakes in Hollywood and you get rejected, you can take the wrong trajectory versus the path you wanted to take,” says Ambruso, who also earned a producer credit for the film. “That’s why I liked the Butterfly Caught script — it tells a true story regarding the darker side of Hollywood that we who live here see on a daily basis. It’s a great cautionary tale. The character Randy is the guy you’re rooting for, the strong thread that helps people struggling with some issues. I resonated with Randy because I feel like in many ways I’ve been sent here to be a light in the middle of all this darkness. He’s been through some tragedy then made some really good choices to help society, and I’m on this mission and I’m immovable. People in Hollywood have their morals and self-esteem tested and Butterfly Caught shows that this journey isn’t easy; it’s littered with broken dreams and people being taken advantage of to get opportunities.”

Ambruso’s personal story fits into the narrative of the Me Too Movement that has rocked Hollywood and exposed heavyweights who have taken advantage of people trying to make it in the cut-throat film industry. “I was relatively new in town and on a date, and a guy walked up to me and said, ‘You look great together, are you professional dancers? I think you have something special. I know Matthew McConaughey’s manager; I think she would respond to you. Let’s talk.’

“So we met at the Whiskey in the Sunset Marquis on Industry Night, and there were celebrities everywhere; Kate Hudson was right behind me. Within three minutes he said he wanted to do something lewd to me in the bathroom. It happened so abruptly and there were so many people around me that I never thought something like that would [happen]. I said, ‘Well, that’s not going to happen.’ He went on, and I started to feel sorry for him. I thought, ‘Wow, this guy thinks this is how you get love. I guess this is how things have worked with him.’ He started belittling me, after I had just been the greatest thing since sliced bread. He said, ‘Well you don’t have what Russell Crowe or Matthew McConaughey have,’ and he picked apart my physicality. I just kept saying, ‘I’m sorry you feel that way.’ I didn’t match his bad behavior. Eventually he said, ‘I have a problem,’ and I said, ‘I know you do. I want us to remain friends, but I don’t want you to help me with my career,’ and he said, ‘No, I can still help you out,’ and I said, ‘I prefer you didn’t.’ And we ended the meal. Then I ran into this guy everywhere for three months, and he was always so flustered to see me! And he wound up doing me a favor and called Beth Holden at Untitled Entertainment and she wound up being my manager for two years. It’s interesting how life works out!”

Using his empathetic nature to diffuse the uncomfortable encounter allowed Ambruso to remain unscathed in Hollywood. “Guys don’t share because we’re embarrassed, and it happens to men a lot,” Ambruso says. “My heart goes out to the young guys in Hollywood who get taken advantage of and make wrong decisions that will tear them up for life. I was just trying to be evolved and be a good guy, and I wound up enlightening this guy a bit. If I had a limited perspective on love, I wouldn’t want someone to slam me down. I’d want someone to handle me with care and say, ‘Hey, this is how you are supposed to treat people.’ These people might not get what they want, but, ultimately, they’ll respect you and I think that will serve you. I feel blessed and thankful things turned out like they did. When I lead with love, I’ve never lost.”

Butterfly Caught will be released in theaters later this year. It made its debut at the 2017 San Diego International Film Festival, winning Best Ensemble Film, and it continues to rack up awards at film festivals, including recently winning Best of the Festival at the Sunset Film Festival Los Angeles and Best Feature Film at the Cape Fear Independent Film Festival.

Intrigued by projects that impact and move audiences, in 2017, Ambruso played a corrupt Texas Ranger, which appealed to his contrarian side, in the dramatic thriller Trafficked, which starred Ashley Judd, was directed by Will Wallace and was written by Harvard Professor Siddharth Kara, who wrote the groundbreaking book, Sex Trafficking. Trafficked details the harrowing account of three young women who were abducted and forced into the brutal, hidden world of sex trafficking. Ambruso also worked as executive producer on Trafficked.

“Years ago, I said I wanted to make movies that touch and inspire,” Ambruso says. “It’s funny — you say things then you forget about it, but every film I’m doing lately is like a major social issue. I don’t want to sound too corny, but I feel like I’ve been put in this position for a bigger purpose to help people on a larger scale. I’ll definitely be trying to do as many films as possible that inspire and change the world and make people think. It’s something in me that is God-given.”

Ambruso is busy with multiple projects. He begins filming The Last Mile Aug. 1. The Great Race, which he has a supporting role in, will be out this year. He also recently did two Lifetime movies, Sisters in Crime and My Daughter was Stolen (a film for which he also earned an associate producer credit). Ambruso, who plays guitar, is also excited about Virtuoso, which he co-wrote based on a true story about a guy who hits his head and wakes up being adroit at playing guitar. He’ll produce Virtuoso with Will Wallace who has been Ambruso’s acting coach and mentor; now the two are partnering at producing films. Ambruso is also co-writing a big budget superhero film entitled 13: The Search for Peace.

A graduate of UT, Ambruso majored in business and accounting, and he minored in drama and Spanish. “I chose accounting because it was the No. 1 program in the nation, but I was passionate about drama,” he says. “My teacher suggested I consider acting as a profession and I thought, ‘I’m doing it!’ I worked as a financial analyst for Dell Computers for a year then packed up a U-Haul and drove out to L.A. My mom said, ‘Aren’t you going to law school? Can you get your job back at Dell?’ My friends thought I was from Mars, but all the girls thought I was awesome! Their jaws were on the floor as I drove off. They all thought I was crazy but now they’re all big fans!” Outside of film, Ambruso is a successful entrepreneur who builds properties and is involved in investment real estate.

Ambruso grew up in Houston and is proud of his Texan heritage. “There is something special about Texas,” he says. “Growing up in a small town and having those experiences made me who I am. I come from a very humble beginning; my mom got pregnant when she was 17. We didn’t really have any help and there was a point in my life when it was just me and my mom in a trailer on a deserted lot. She was just a kid trying to raise a kid, and I was in many ways raised by the television set and the radio because she was gone cocktail waitressing. I was by myself a lot so I developed this unusually strong connection with media because many of my big formative emotional moments came from T.V., radio and movies.”

A charming Southerner, Ambruso is smitten with Louisiana and New Orleans. “I love Louisiana,” he says. “Texas and Louisiana are my people! I loved my trips to Louisiana to watch football games. I had one of my best times ever in New Orleans. In college my buddy and I just jumped in the car and drove to New Orleans and went to a bowl game. We had the craziest time at the Cats Meow! It was 3 a.m. and I looked around and I was the only one dancing! I walked to the street, and the rain came pouring down, and I sprinted in my cowboy boots all the way to Cafe du Monde; sat down; put my head on the table; then woke up early in the morning and ate my cold beignets and warm milk before shuffling back to my hotel. On the last trip I took with my ex-girlfriend, who I dated for five years and is from Lafayette, we went to New Orleans and had some amazing dinners and had some fun. And I went back to Cafe du Monde. New Orleans is so charming and cool, and I really love it.”

Ambruso’s empathetic nature extends to animals and he supports the Louisiana SPCA, which is gearing up for the 9th annual NOLA on Tap Beer Fest Sept. 22 at New Orleans City Park. “I love animals,” Ambruso says. “I love dogs, cats and all living creatures. I’m doing so much that it wouldn’t be fair to have a pet right now. I grew up with animals. When my house is finished and I have a yard, I’d like to get a dog. I’m honored to support the Louisiana SPCA. Animals are important and need to be protected, loved and adopted.” butterflycaughtmovie.com, facebook.com/adamalanambruso, @adamambruso