A local boxing trainer shares his love of the sport. 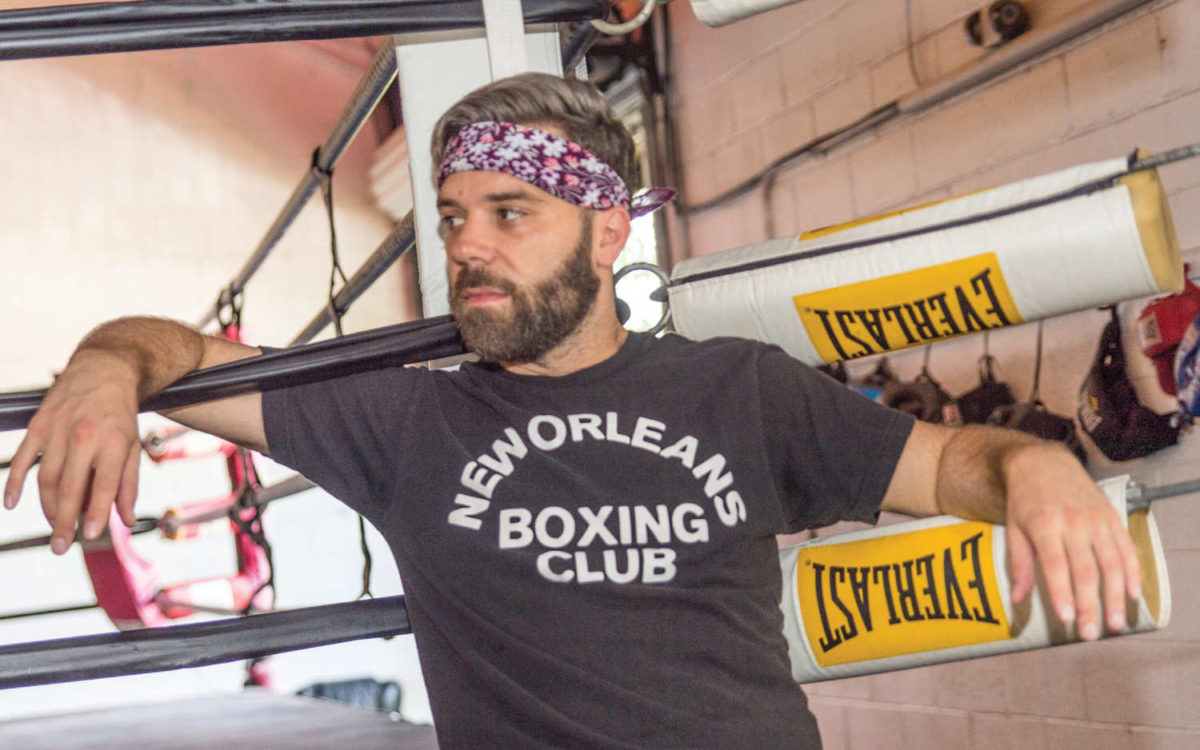 Chase Dixon, co-owner and trainer at New Orleans Boxing Club, is a fifth generation New Orleanian. He grew up between New Orleans and Houston, and his entire family is still here in New Orleans. “Boxing was always big in my family growing up,” he says. “My father and uncles, brother and sister all boxed; we watched fights every weekend on TV, and, when boxing came to town, we always went. So I had always been around the sport and understood it. I didn’t know it would end up being my career but couldn’t be any more grateful that it is.”

NOBC opened in March 2015 and offers something for everyone. Group classes take place every day of the week, with everything from the Bad Girls Club class on Monday night — which is an all-female class specializing in self defense — to the club’s signature Boxing 101 class taught by former world champion and Hall of Fame great, Spyder Hemphill. “There is no place on earth like it,” Dixon says. “Boxing gym aside, it is the epitome of New Orleans. We have amateur and professional world champions, mixed in with doctors, lawyers and teachers.”

Soon, the boxing gym will be rolling out a series of new classes catering to the LGBT community. There will also be a new location Uptown, offering as many as 10 classes per day. “We also run a non-profit youth program, New Orleans Boxing Institute, where we work with a neighboring school to provide wraparound services and a boxing mentorship program for at-risk youth,” Dixon says. “But what really sets us apart are our fighters. If you go to a boxing gym, you expect to see boxers — and we have some the best in the world. WBC super lightweight world champion, Regis Prograis; No. 1 ranked light heavyweight amateur boxer in the USA, Sean Hemphill; and IBA middleweight champion Marcus McDaniel all train at the club daily. It’s a special place with a special community.”

For Dixon, having a career in boxing has been a true blessing. In his opinion, being a boxing trainer is the best job in the world. “I get to wear sweatpants and a t-shirt to work every day and teach the brilliance of boxing,” he says. “Boxing has taken me to some really amazing places, but, more importantly, it has allowed me to meet even better people. The language of boxing is truly universal, and I couldn’t be more humbled to be put in the position I have been.”

In terms of his personal fitness routine, Dixon finds it hard to squeeze in a workout in between working with clients. During the day, he has very little downtime, and being so hands-on and staying active with fighters keeps him in great shape. “It’s easy to work out five or six times per day just with your clients or fighters,” he says. “But it’s also opened my eyes to the importance of my diet. I know that even if I can’t sneak a workout in for myself, I will have done enough in a day that will allow me to maintain my health if I eat right, drink plenty of water and get good sleep. So these days, I look at a workout like a rare gift.”

“I’ve built my reputation by being very hands-on with my fighters,” Dixon says. “Training boxers and clients all day, and being around these top athletes, who are some of the best conditioned in the world, you have to be able to keep up. Training sessions are extremely hard on the body for not only the boxer, but for the trainer as well. Holding the mitts, working the body shield, moving with your fighter — it is a very physical job. And for someone like me, it’s something I have to do six or seven times per day, so being in top shape is a must.”

“Diet is key,” Dixon says. “Our head strength and conditioning coach at NOBC, Markell Haynes, is also a nutrition coach and he helps me keep my diet well-rounded and healthy — often doing meal prep for me and other trainers at the gym. Because my day is so busy, it can be easy to get off track with nutrition and eat too many unhealthy/quick meals. Markell keeps me on a healthy meal regimen. But, I do love indulging on my favorite foods. It’s all about balance, and that balance for me isn’t just salads and high protein meals — it’s also fried chicken, bacon cheeseburgers and an occasional bowl of cereal.”

“Hands down my biggest success story I’ve had as a trainer has to be my business partner at NOBC, Alex Ackel,” Dixon says. “He actually started out as my client, and was extremely overweight, and wanted to make a lifestyle change. We stared training in April 2013, and, over the course of that year, I’ve never seen someone work harder, make more sacrifices and push their limits the way he did. I was amazed by his work ethic. No matter the circumstances, he wouldn’t let anyone outwork him. By the same time the next year, he was down 100 pounds with less than 5 percent body fat. It was inspiring to watch, and I was honored to be a part of it.”

“The advice I have for people who are looking to start a fitness program or get fit is to come to New Orleans Boxing Club to kick some butt,” he says.