Home IN THIS ISSUE A Beguiling Boutique
IN THIS ISSUE
SPACES
August 1, 2018 Kim Ranjbar 0

After a multimillion dollar interior renovation, a 1930s-era hotel is transformed into an alluring boutique hotel and equally enticing restaurant on Canal Street. 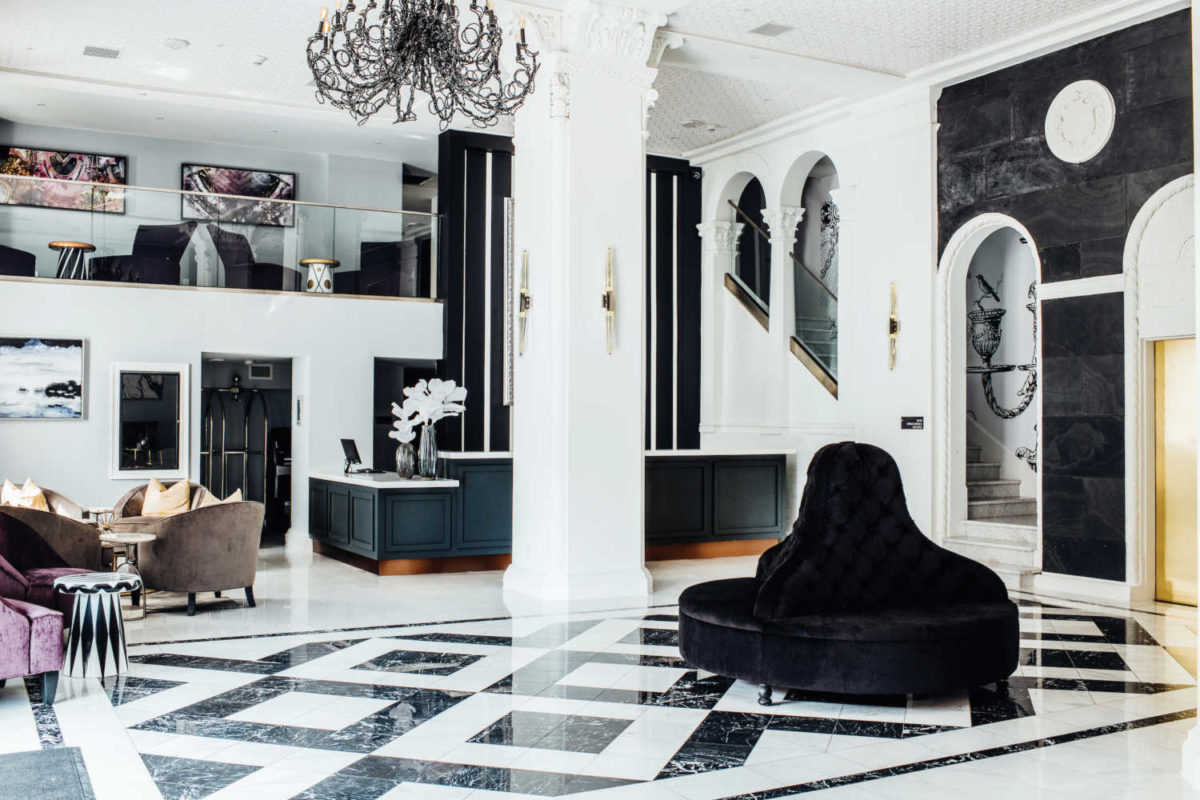 Originally designed as the Hotel New Orleans in 1927, the structure on the corner of S. Saratoga and Canal streets has seen many incarnations in its near century-old existence. In the past decade alone, the building was occupied by Lexington Hotel & Suites, Clarion Inn & Suites and most recently the Hotel 504. Most recently, the space was purchased and renovated by B Hotels & Resorts, an organization run by investment company InSite Group out of Florida.

B on Canal opened its doors to the public several months ago, revealing an enchanting decor and atmosphere designed by another Florida firm, ID & Design. The hotel’s unique charm offers a nod to our city’s storied history with an elaborate black and white, custom marble floor in a lobby reminiscent of a French boutique. Original architectural details also play into this concept. “There is ornate plaster work around the elevator that is part of the original design,” says Vanessa Edden, director of design for Element Design of B Hotels & Resorts. “It was in old photographs from the 1930s and ’40s.” The rising arches and columns in the lobby are also part of the original 1927 design.

Dark purples and grays are found throughout the hotel and its 155 well-appointed rooms in the form of lush carpeting, velvet-upholstered couches and wall coloring. The rich colors are not only warm and luxurious, but they also set off headboards and hallways etched with black and white illustrations from the Renaissance period. “They’re sort of classical details with a whimsical twist,” Edden says.

All renovations have their rough spots, especially in buildings almost a century old. Though no changes were made to the exterior or root structure, there were still difficulties when re-imagining layouts in certain areas of the hotel. “Everything was still plaster so the old walls would just crumble if we wanted to create a new doorway or remove a wall,” Edden says. “We had to essentially rebuild some of the guest rooms for this reason.” It was also a monumental task to rework the plumbing, modernizing the bathrooms and making sure everything was ADA compliant.

Several months after it was opened, the B on Canal also launched Madam’s Restaurant & Bar, making it the focal point of the hotel. “We reworked the whole area around the reception desk and we changed the main [hotel] entrance from Canal to Saratoga,” Edden says. “Now you enter the restaurant from Canal Street.” Embracing the history of the Storyville area, the new restaurant’s design reflects the historic red-light district in which the building resides. “When we got to the restaurant, we thought it would be a nice play off of what we have, but yet create a destination feel,” Edden adds.

Mysterious and alluring, the restaurant retains the classical elements found in the rest of the hotel like the Carrara marble and walnut-topped bar, but other accents give it a much more seductive appeal. Dark grays on the walls, tin ceilings, black velvet Hollywood banquets with tufted cushion backs, fishnet-like curtains and red accent lighting under the bar all play into a rather libidinous atmosphere. New Orleans native Drew Mills is the Executive Chef at Madam’s offering decadent dishes like Gulf tuna carpaccio, foie gras torchon, wild mushroom ravioli with truffle beurre fondue and adobo-braised pork shank with coconut rice and crispy onions. The restaurant also features chilled Gulf and Atlantic oysters and Cajun caviar service.

Finally, B Hotels & Resorts has a lengthy list of mottos it meets at each and every location. Things like “B Adventurous” and “B Nourished” are pretty obvious, encouraging guests to explore the city they’re in and enjoy the dining options provided respectively. But one motto is particularly encouraging, and that is “B Humane.” The property wishes to minimize its own impact on protected animals and wishes to promote awareness and preservation. To that effect, at the B on Canal, guests are greeted by a stuffed albino alligator in their rooms. Guests are encouraged to purchase the stuffed animal, and a portion of the proceeds are donated to wildlife programs designed to protect the endangered animal. 1300 Canal St., (866) 316-5607, bhotelsandresorts.com/b-on-canal

186
previous Downtown Living: August 2018
next On the Rise