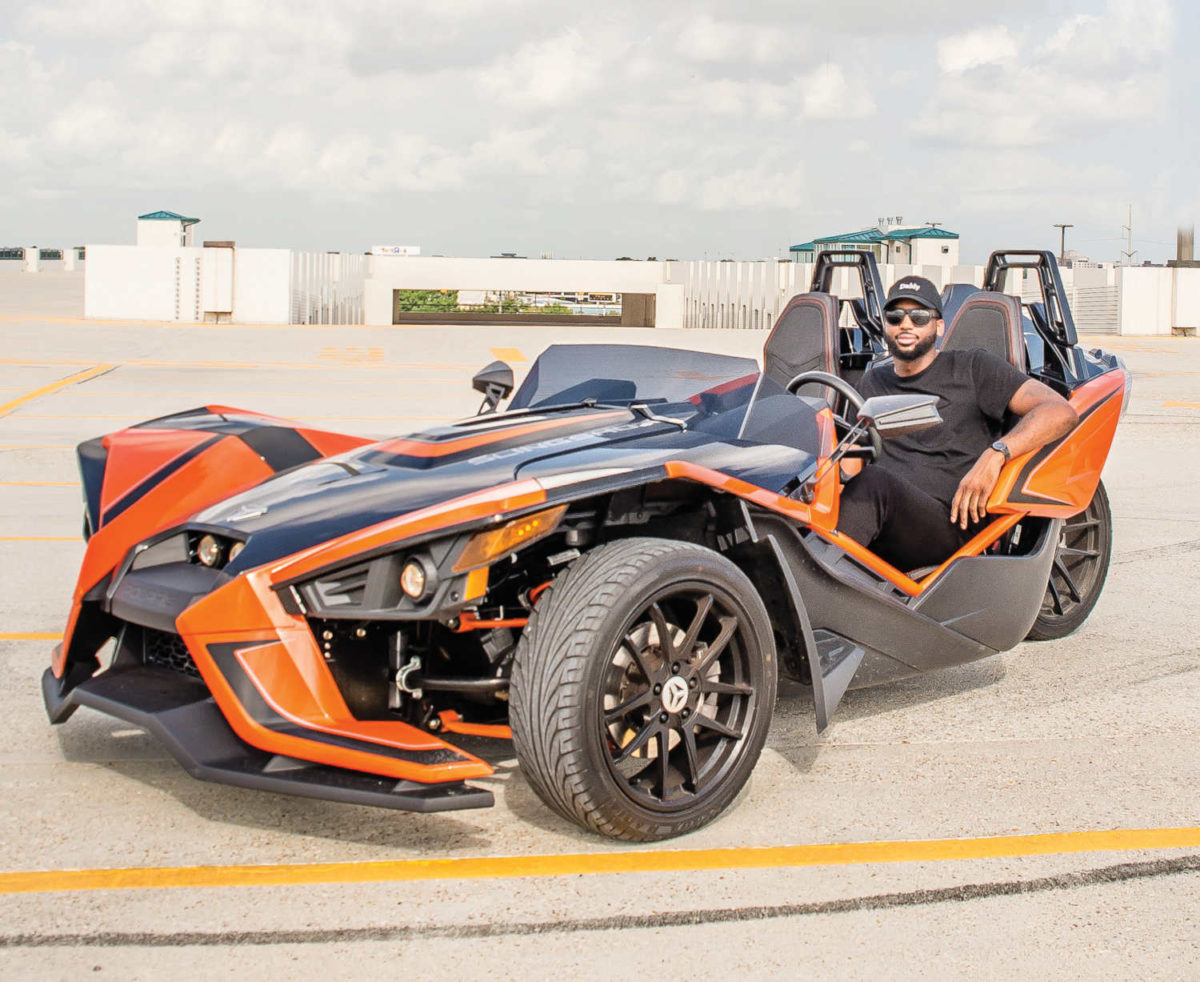 You may have seen a few of the Polaris Slingshots on the streets of New Orleans lately. What these three-wheeled, open-air roadsters lack in terms of a roof or doors, they make up for in pure excitement. The Slingshot is all about performance, and it’s street legal — so you only need a driver’s license to operate it (no motorcycle license required). One local Slingshot enthusiast, Brandon Moore, is a New Orleans native who grew up in Gentilly. In addition to being a professional international basketball player — he played for a team in Bahrain known as ISSA Town, and, soon, he may be going to play in China — Moore also gets his kicks from playing video games and driving around town in his Polaris SLR 2018 Orange Madness Slingshot.

“I purchased mine in April 2018 from Indian Motorcycle of New Orleans in St. Rose, La.,” Moore says. “I wanted one because it was something different for the city of New Orleans. It’s my only mode of transportation.” The Slingshot looks like the bat mobile, but it drives like an adult-sized go-cart, making you feel like you’re a professional race car driver.

One of the best things about owning a Slingshot, Moore says, is that it makes for a great alternate to a car. “The Slingshot is definitely more of an eye-catcher and it’s a lot easier to get around in rather than a car,” he says. “I believe it’s a good choice for New Orleans because of all the small streets we have, such as Bourbon, and all the potholes we have. With the Slingshot, I can easily avoid objects and potholes.”

In addition to being highly maneuverable, the Slingshot doesn’t take much money to fill with gas (about $20 for the 9.77-gallon tank); it’s easy to park on crowed streets; and it’s a zippy way to get around town. All of the Slingshot models feature ABS disc brakes, and a 2.4L DOHC 4-cylinder engine that delivers 173 horsepower by way of a five-speed manual transmission.

Moore is part of a group of five enthusiasts who all own Slingshots. “We basically just found each other driving around the city and got each other’s information,” Moore says. They routinely get together to drive around the city, and they especially love seeing people’s reactions while driving around in the French Quarter. Moore also recently took his Slingshot on a trip to Atlanta.