Liam Deegan and Robert LeBlanc, co-owners of Barrel Proof, have joined forces once again to create Longway Tavern, a French Quarter way station that exudes a bohemian sense of camaraderie and hospitality. 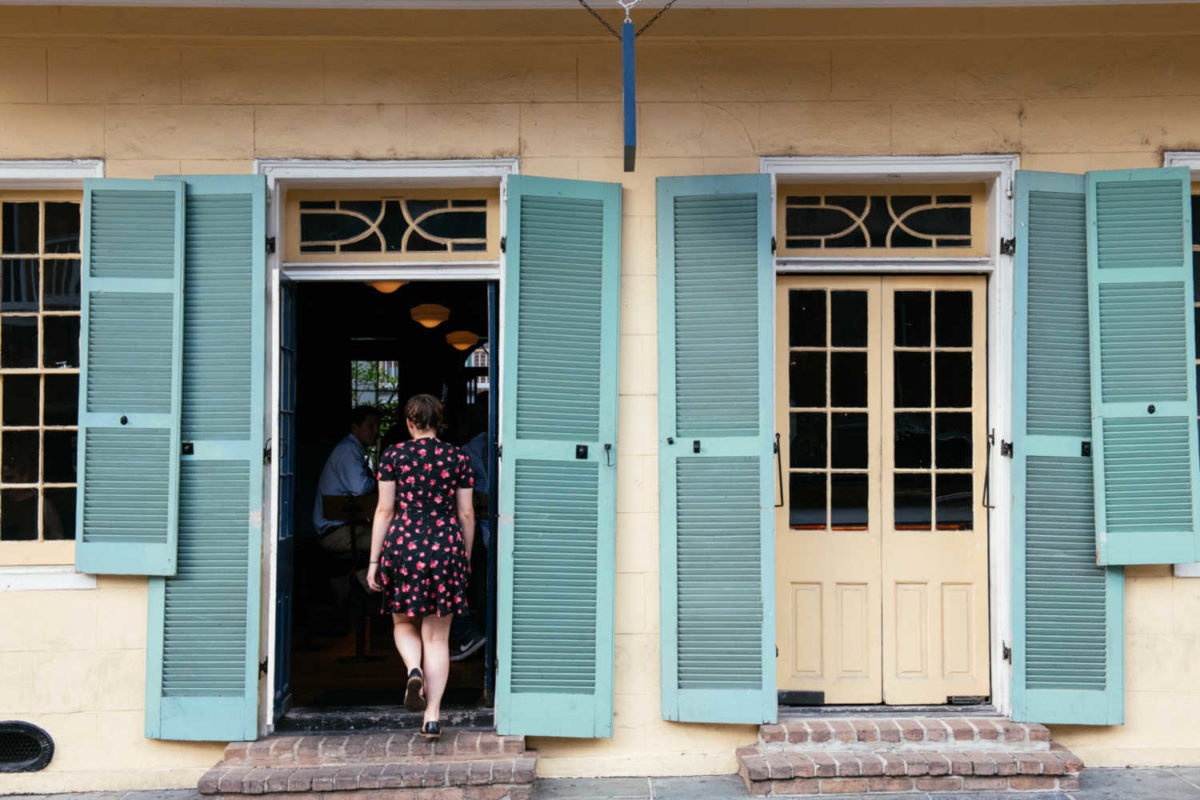 Originally built in 1794, the building that houses Longway Tavern sits just about midway between Bourbon and Royal streets in the historic French Quarter. Previous structures at this location were destroyed in two fires that ravaged the area in 1788 and 1794, though something must be said for the Creole cottage that remains today, surviving more than two centuries of subtropical weather and a fascinating array of tenants. It was this unique history and the building’s own appeal that attracted restaurateurs Robert LeBlanc and Liam Deegan to the property. “It always starts with having an opportunity to take a cool building, salvage it and reintroduce it to people,” LeBlanc says. “I’ve learned from past experiences to take your time and make the right choices of locations and buildings that have a sense of ‘terroir’ that you can tell a story through.”

The first owner was Madalaine Bizot, a free woman of color believed to be the mistress of Jean Joseph Bizot, a white man who fathered three of her four children. Later the property was sold by one of Madalaine’s sons, Celestin, to Louis Castein, a decorated veteran of the War of 1812. Castein and his family lived in the home for most of the 19th century.

In the early 1900s, the property was purchased by Roark Bradford, a Times Picayune night editor who spent the rest of his life there with his second wife, Mary Rose. The Bradfords were writers and free spirits who kept late hours and an open-door policy, a characteristic that particularly appealed to LeBlanc and Deegan when designing Longway Tavern. “I’m kind of a history geek, so I have a bunch of these old articles and archives that commemorated Rourke and Mary Rose Bradford,” LeBlanc says. “People would always stop by for one more nightcap or pop by to sober up before driving home, and Mary Rose would make breakfast for them.” LeBlanc’s vision for Longway Tavern is to revive this unique sense of community and hospitality.

Subsequent to the Bradfords, 719 Toulouse St. was also occupied by Little Vic’s, a Sicilian cafe and gelateria and Wehmeier’s Belt Shop — a business that still exists today inside the Riverwalk. In a serendipitous turn of events, Deegan realized, after they purchased the building, that he possessed an interesting connection to its past. “Liam Deegan’s dad is an artist who creates things from metal, including belt buckles,” LeBlanc says. “He only had one client in Louisiana, and that was Wehmeier’s Belt Shop. Liam came down with his dad on a work trip and became enamored with the city and decided to go to school at Loyola.” In essence, the first French Quarter building that Deegan, a Rhode Island native, went into was the structure that now houses Longway Tavern.

During the year-and-a-half-long renovation, LeBlanc and Deegan encountered the usual difficulties, obstacles typically found in a building of more than 200 years old. “Over the years, there have been several renovations and people were sort of masking over problems like taking sheet rock and putting it over plaster,” LeBlanc says. “But it’s not really a big deal because it’s one of the things we enjoy doing.” Not only did they reshore the roof lines and remove all of the sheet rock, they replaced it all with plaster as it was constructed so long ago.

From the exterior, the Creole cottage that houses Longway Tavern looks like many others found in the French Quarter, though its gabled roof is somewhat unique. There’s also a second story apartment in the building currently being used for storage and other needed space for the tavern, but the owners hope to do more. “What we’d like to do is build out the apartment and use it to host visiting chefs and visiting bartenders from other parts of the country,” LeBlanc says. “It’s a dream right now, but we’ll get it done.”

Like LeBlanc’s other projects, Cavan and Sylvain, the design and atmosphere was a collaborative effort achieved between his partner and extremely talented friends. The decorative plaster work and colorful graphics in the front and rear foyer were done by Sylvia Thompson-Dias (sylviatdesigns.com) who also did work at LeBlanc’s Uptown restaurant Cavan. “[The graphics] are actually the two most popular belt buckles that Liam’s dad sold in that store when it was Wehmeier’s Belt Shop,” LeBlanc says. “One is an alligator and the other is of Jack Ruby’s girlfriend (Candy Barr) who was a burlesque dancer on Bourbon Street right around the corner at the time Jack Ruby shot Lee Harvey Oswald.” The gorgeous ash bar that runs the length of Longway Tavern was built by Ron Lee, who has built almost all of the bars in LeBlanc’s restaurants. Local photographer Sean Yseult, who was also tapped for Cavan, shot and curated the framed photography that lines each side of the bar. Finally, the upholstery for the banquettes and the bar stools, and the banquettes and the bar stools themselves for that matter, were built by GoodWood (goodwoodnola.com), a local custom furniture company.

With its warm wood tones and natural gray plaster, Longway Tavern radiates a comfortable, laid-back atmosphere, which is exactly what was intended. “It’s designed to make you feel like it’s okay to laugh too loudly, or do a shot of whiskey,” LeBlanc says. “We don’t want anyone to ever feel self-conscious or uncomfortable in any of our spaces. If you nick the wall, you don’t feel like you were the first one to nick that wall … and that shouldn’t ever interfere with how much fun you’re having.” longwaytavern.com