Home IN THIS ISSUE The New Kid In Town
IN THIS ISSUE
SPORTS
September 3, 2018 Paul Wegmann 0

The New Kid In Town

Running back Jonathan Williams looks to step in for the Saints. 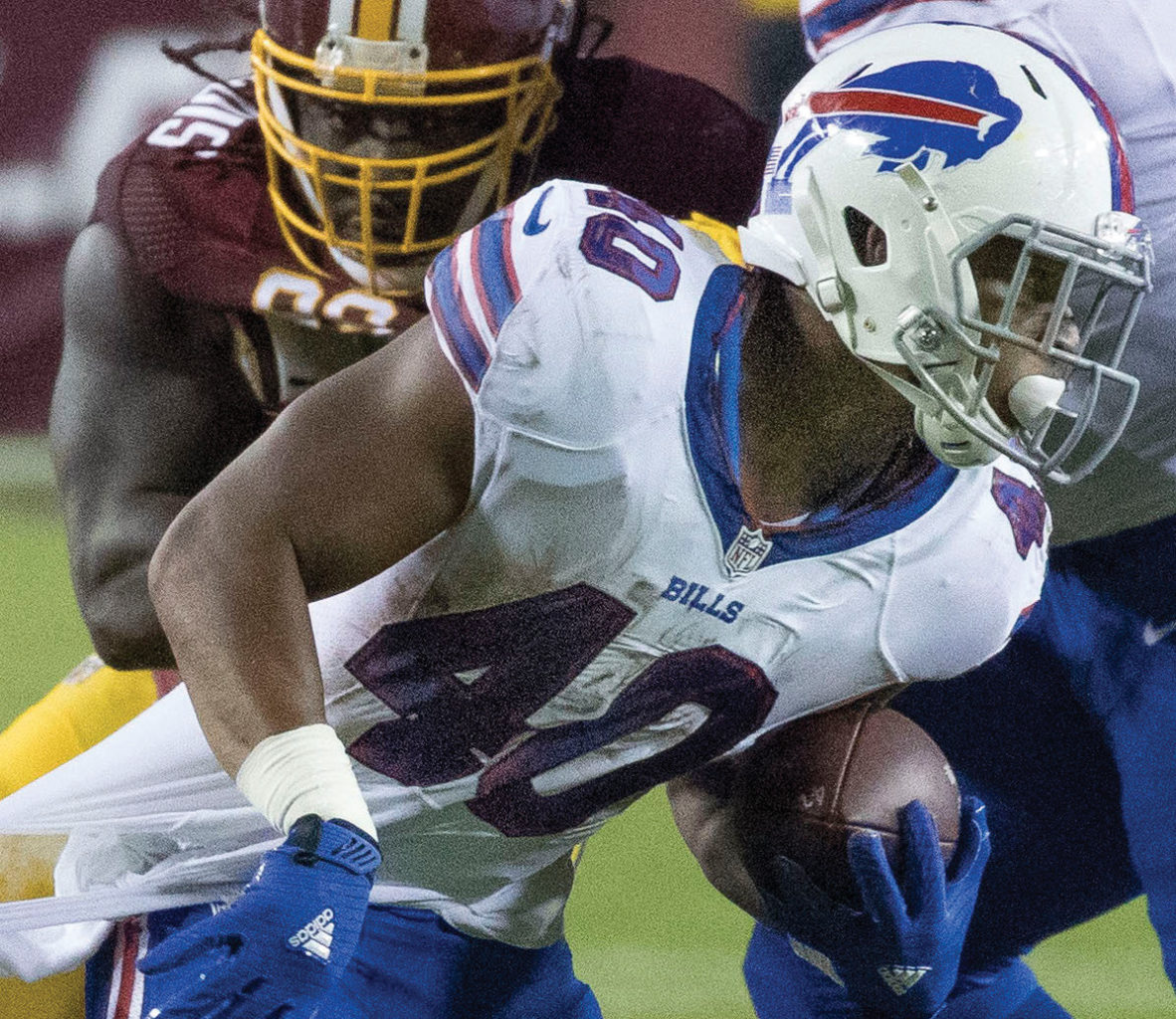 Jonathan Williams came to the New Orleans Saints in 2017 looking for a chance. A promising fifth-round pick out of Arkansas selected by the Buffalo Bills in the 2016 NFL draft, Williams appeared poised to become the backup to perennial All-Pro candidate LeSean McCoy as the 2017 season approached. However, surprisingly, the Bills waived Williams in their final roster adjustment. Immediately after clearing waivers, Williams landed for a spell with the Denver Broncos who signed him to their practice squad. Just two months later, when the Saints lost Daniel Lasco to a season-ending injury, they signed Williams to their active roster, a permissible move under NFL rules. Although Williams did not have any rushes or receptions for the Saints in 2017, when the NFL announced that Mark Ingram would miss four games due to a suspension at the beginning of the 2018 season, it became clear that Williams might have a chance at the job to replace him. Clearly, the Saints would need a replacement for Ingram’s essential role in the powerfully effective tandem he forms with Alvin Kamara for the rapidly approaching 2018 season.

The competition would be stiff, as Lasco himself would be returning; fan favorite Trey Edmunds would be present; and the Saints had drafted Boston Scott of Louisiana Tech in the sixth round as well. The Saints would also ultimately bring in veterans Terrance West and Shane Vereen. Staring at a depth chart thick with experience and talent, Williams would have to make an impact on the field — and that he did when he emerged in the Saints’ first preseason game with a nearly seven yards per carry average and a touchdown, leading the team’s running backs in rushing yards and giving the offense a spark in their comeback win on the road versus the Jacksonville Jaguars. Williams again led the running backs in rushing yards in the second preseason game versus the Arizona Cardinals. In that game, Williams was part of the first team offense and indeed had begun to receive time with the first team during training camp.

Drew Brees was effusive in his praise, stating, “I think once the pads come on, he is an impressive guy. He has run the ball extremely well, but I think more so than that, he has stuck his nose in there in pass protection better than anybody I have seen in a while. He really takes pride in that and obviously that is a role amongst our running backs that they take really great pride in. Alvin [Kamara] and Mark [Ingram] both [do that] and typically that takes some evolution. A lot of guys come in and they’re good runners, but once you kind of get them into the system and they realize, ‘okay I have got to be able to pass protect too, because if I can do that, that means I am going to be on the field more, which means I’m going to get other opportunities to both run and catch balls out of the backfield. It just makes me a more versatile player; a more productive player.’ I think that’s something that Jonathan Williams has done very well thus far.”

Proving himself with good practices, while showing vision and the ability to take full advantage of good blocking, Williams had done well enough in training camp to earn the additional opportunities he received in the preseason. But his journey was an even longer one due to the mishaps that had occurred to him. Aside from the 2017 release from the Bills, Williams has also been climbing back from a foot injury that deprived him of his senior season with the Arkansas Razorbacks.
In the 2014 and 2015 seasons, Williams had rushed for 2,280 yards and generated 20 total touchdowns. For his college career he averaged a terrific 5.6 yards per carry. In keeping with the tradition of Razorback running backs who had emerged and succeeded in the NFL such as Gary Anderson and Darren McFadden, and including his battery-mate Alex Collins who blossomed with the Baltimore Ravens in 2017, Williams seemed destined for a high draft slot and a bright pro career. But since that time, aside from gathering 27 carries for Buffalo in 2016, Williams has largely been off the field for more than two seasons now. But he still brings all the gifts that made him all-SEC as a junior — elusive, quick-footed agility and capability in the passing game — and that had suggested he was destined for a pro career.

And he may be a perfect fit for the Saints’ blocking style, as the offensive line — now stacked with perhaps the league’s best end-to-end talent — is conducive to backs with his slashing motion. Williams’ ability to operate in space, which is the essence of the Saint’s offensive scheme, means that he may be able to use his quick cutting to juke defenders in open field and explode downfield.

Williams also showed toughness in close quarters and a willingness to lower his shoulder into tacklers, and, while he was not asked to catch much at Arkansas, he showed consistently good hands, which is an absolute necessity to get on the field with Brees at any point in time. Ultimately, while Williams has had a tough two years recently, his chance to reclaim his future may coincide with the Saints’ need to maintain their momentum from 2017 as being one of the league’s premier rushing teams. Ultimately both Williams’ and the Saints’ misfortune might work out to the benefit of both.