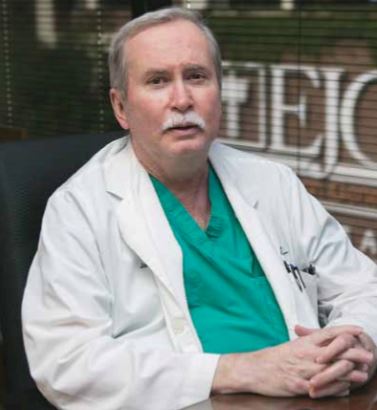 Atrial fibrillation, also known as AFib or AF, is an irregular heart rhythm that effects the upper chambers (atria) of the heart. In AFib, the atria quivers instead of beating normally. While a healthy atria contracts 60 to 80 times per minute, a fibrillating atria quivers at 300 to 400 times per minute. “AFib is a malfunction of the heart’s electrical system,” says Dr. James McKinnie, a board-certified cardiologist/electrophysiologist at East Jefferson General Hospital. “Essentially, the heart of an AFib patient is working as if it is running a marathon, even when the patient is standing still.”

AFib occurs in an estimated 2.7 million Americans and is the most common type of irregular heartbeat (arrhythmia). The risk for stroke is five times greater for those with AFib than in the general population. “As a result of the quivering during AFib, blood is not completely pumped out of the atria, which may cause it to pool and clot,” Dr. McKinnie says. “While this condition in itself is not considered life-threatening, people with AFib are five to seven times more likely to form blood clots and may suffer a stroke.”

It is estimated that 15 percent of strokes are a result of untreated AFib. While AFib can occur at any age, it is more common in people 65 years and older and in people with high blood pressure, heart disease or diabetes.

TREATING AFIB
There are various ways to treat AFib depending on factors such as the type and severity of the patient’s arrhythmia, prior treatments and other medical conditions. Treatments include lifestyle changes, medications (to slow the heart, control its rhythm or reduce the risk of blood clots that can cause strokes) as well as catheter-based ablation procedures and surgery.

With catheter ablation, an electrophysiologist inserts a thin flexible catheter, with an electrode on the tip, into the neck or groin steering it into the heart. There are three technologies for catheter ablation: radiofrequency; cyro; and laser. “We are very proud to say that we were the first hospital in Louisiana and the Gulf Coast to use the CardioFocus laser balloon,” Dr. McKinnie says. Ablation is performed by applying the catheter to areas that are likely to be the cause of the arrhythmia, creating a scar that will discontinue the electrical impulses that cause AFib. In catheter-based ablation procedures, the pulmonary veins are targeted. Although these techniques are usually effective for treating early forms of AFib, known as paroxysmal (intermittent) atrial fibrillation, it’s less effective at treating persistent or permanent forms.

The Convergent procedure combines the best aspects of arrhythmia surgery and pulmonary vein isolation in one operating room. A team including cardiac surgeons and electrophysiologists will work together to first cauterize the posterior wall of the heart and ablate the pulmonary veins by either freezing or burning it to interrupt triggers causing the atrial fibrillation.

East Jefferson General Hospital is one of the very few centers offering the Hybrid Convergent procedure. EJGH started this program in 2011 and currently has completed more than 330 cases to date. The Hybrid Convergent team consists of cardiac surgeon, Dr. Mike Brothers, and electrophysiologists, Dr. Zhen Jiao and Dr. James McKinnie. When the 100th Convergent Hybrid procedure was performed in 2013, EJGH earned its place in the top five hospitals in the United States for this milestone and pioneering procedure.

“Hybrid ablation is an innovative procedure to stop AFib in its tracks,” Dr. McKinnie says. “We put everything we know how to do in this procedure. While traditional treatments usually can help control AFib symptoms, the AFib is often recurrent. When AFib returns, the risk of blood clots, stroke or heart failure return as well. With one hybrid procedure, we can ablate targeted tissue in and outside the heart. For those patients with longstanding AFib, the success rate for hybrid ablation is over 80 percent.”

MAPPING SUCCESS
Remaining on the cutting edge of technology, EJGH is the only hospital in the Gulf South with the state-of-the-art Rhythmia Mapping System. This system allows electrophysiologists to focus in on the potential source of dysrhythmia. By utilizing a mini-basket catheter with 64 electrodes, arrhythmia can be mapped with extremely high precision. “We now have the tools to go after irregularities that in the past, we may not have pursued,” Dr. McKinnie says.

ATRIAL FIBRILLATION AWARENESS
Approximately 850,000 people are estimated to have AFib and remain undiagnosed. A full quarter of adults over age 80 will develop at least one AFib episode in their lifetime and many will be chronic. Someone with AFib may or may not experience symptoms. Symptoms may include fatigue, a rapid heartbeat or shortness of breath. High blood pressure, obesity, sleep apnea and stress may exacerbate the condition. Caffeine, alcohol (especially binge drinking) and nasal decongestants are also tied to AFib.