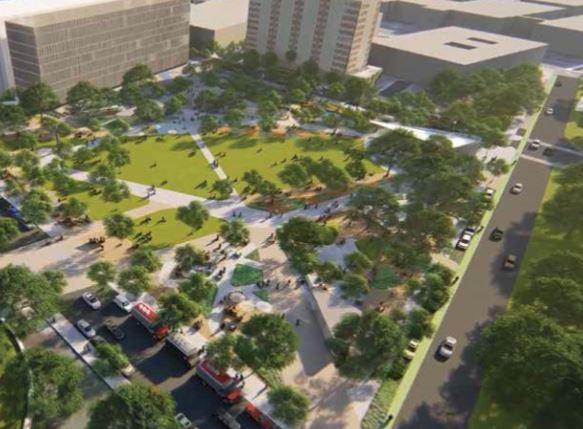 The Downtown Development District and Arts Council New Orleans in partnership with Southwest Airlines and Project for Public Spaces hosted an event last month inviting the community to explore new enhancements to Duncan Plaza and learn about the upcoming fall programming for the park. In 2017, the DDD agreed to take over the management of this valuable green space from City Hall and immediately began planning and fundraising for its redevelopment.

“We not only want people to reintroduce themselves to Duncan Plaza, but also give them a reason to stay in the park, providing a natural gathering place for Downtown residents and visitors,” says Kurt Weigle, president and CEO of the DDD. Future plans for the park include a dog park, food and beverage plaza, a children’s play area and innovative green infrastructure.

Due to Southwest Airlines’ Heart of the Community program, the Arts Council of New Orleans and the DDD have implemented short-term programming and enhancements, while continuing to work on long-term goals for redevelopment. “By investing in authentic relationships, and creating spaces and opportunities that bring people together, we can build connections and strengthen communities,” says Linda Rutherford, senior vice president and chief communications officer of Southwest Airlines.

New enhancements include an LED light cloud — providing an eye-catching display and ambient light for evening events — and seating elements and infrastructure like seating with built-in flower boxes created by One to One Design.

Events: PARK(ing) Day
This San Francisco-born project from art and design studio Rebar in 2005 has now become a global event where artists, activists and citizens come together to, for a short time, transform metered parking spaces into public spaces or PARK(ing) spaces. The vast majority of urban space is dedicated to vehicles, while a much smaller portion is allocated to open space. In this ephemeral artistic expression, people seek to re-imagine these parking spaces, briefly altering the character of the city for a glimpse of what urban spaces could be like if we focused on space for people instead of automobiles. See what the denizens of Downtown come up with this year on Oct. 19. downtownnola.com/parking-day-nola-2018

Festivals: New Orleans Film Festival
Celebrating its 29th year, the 2018 New Orleans Film Festival — taking place Oct. 17-25 — has grown into an internationally respected event that attracts more than 25,000 people, more than 400 filmmakers and 240 films each year. It is also one of the few film festivals that is Oscar-qualifying in all three Academy-accredited categories: Narrative Short; Documentary Short; and Animated Short. This year’s lineup includes Green Book directed by Peter Farrelly, A Tuba To Cuba directed by T.G. Herrington and Danny Clinch, Wildlife by Paul Dano, Blowin’ Up by Stephanie Wang-Breal and Chained for Life by Aaron Schimberg. Venues include The Contemporary Arts Center, The Advocate, The Orpheum Theater, The Broad Theater and The Prytania Theater. neworleansfilmsociety.org

104
previous The New Kid In Town
next Spaces & Design: Where there's smoke ...