A historic, Spanish colonial-style building in the Lower Garden District is transformed into an exquisite event space. 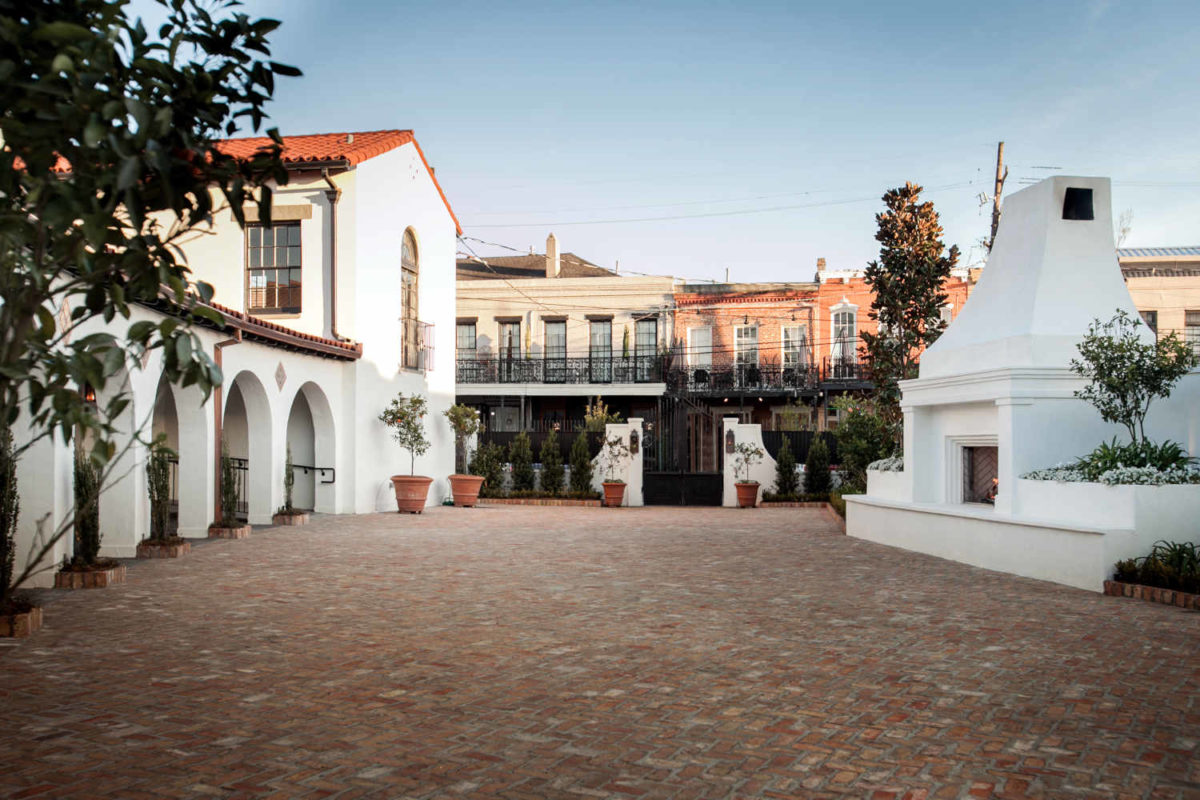 Located on a wedge-shaped piece of land bordered by Magazine Street, St. Mary Street and Sophie Wright Place, Il Mercato functions as an elegant venue for weddings and other events. But almost 90 years ago, when the building was first constructed, it was intended for something quite different.

Architect Sam Stone, Jr., designed the original building, among other notable local projects like the Maison Blanche building, the Masonic Temple and the First Presbyterian Church on South Claiborne Avenue. The Spanish colonial-style structure was constructed in 1931 thanks to the Works Project Administration to be used as a public market. Though the structure was created for the community on the Federal dime, many residents were unhappy with the design. “It is very clear in our research that the citizenry did not like the building,” says Joel Dondis, owner of Il Mercato and Joel Catering & Special Events. “They said it was not a New Orleans-style building and they actually created a formal petition to have the building torn down, but thankfully that didn’t happen.”

For three decades, the building served as a market offering fresh seafood, meat and produce until competition from the rise in supermarkets made it obsolete in the 1960s. For many years after, the space was used by a print shop and fell into disrepair until Joel Dondis purchased the space in 2013. “This building just happened to be perfect for what we intended, and it was beautiful,” Dondis says. “It was kind of like, as they say in the car world, a ‘barn find.’”

At the time, Dondis had owned his catering business for 20 years and had long sought a venue specifically for his company, Joel Catering & Special Events. With approximately 5,000 square feet of interior event space and a 3,500-square-foot courtyard, the old market seemed like a perfect fit. “The neighborhood had already undergone a great transformation,” says Sarah Hall, president of Joel Catering & Special Events. “There was a lot of commerce and a lot of beautiful, original buildings, and what became the Il Mercato building was really the last piece of the puzzle on the block.”

Local architecture firm NANO, LLC, was tapped to manage the renovation when Dondis purchased the building in 2013. Though historical renovations often offer a lot of difficulties to overcome, the overall structure was surprisingly sound. “With all of the struggles we had with this renovation, the building itself never let us down,” Hall says. “A lot of the beauty of Il Mercato was here all along. We just had to polish it up a little bit and let it be what it was meant to be.”

With beautiful arches, stucco and terra cotta roof tiles, the building required only a few changes here and there to make it what it is today. Preservationists painstakingly restored the original plaster walls and protected the tile walls (originally in green and yellow) in layers of beeswax, plaster and paint. Additionally, exterior ornamental pieces like the diamond tile patterns between the arches in the courtyard and the crest over what used to be the front door are also original pieces. In fact, the crest that depicts two pigs kissing and a goose surrounded by fruit became Il Mercato’s official logo.

One major alteration to the property was the creation of the courtyard. What was once an asphalt parking lot adorned by a dumpster has been dramatically transformed. Now guests can enjoy a stunning patio laid with century-old bricks surrounded by wrought-iron gates, stucco walls and a lovely outdoor fireplace. All of the metalwork was done by Scott Ornamental Iron, LLC, which includes the wrought-iron fence, gates and even an interior door. “We had an original barn door and we wanted another one on the opposite side,” Hall says. “Ed Scott actually recreated it to match the original.”

Much of the interior is left without a lot of extra decor, allowing a blank canvas for their client’s events, though the bar, or The Library as it’s called, has some added flourishes. With help from J. Latter Designs, an interior design company in Los Angeles (owner Julie Goldman just happens to be from New Orleans), the space touts tufted banquettes, shelves lined with books sourced from the New Orleans Public Library and warm wood beams on the ceiling. “For the beams, we took the original joists and pushed them together with an iron bolt,” Hall says. Especially suited for weddings, there’s also a ladies lounge — a jewel box space with feminine decor based off of a floral wallpaper pattern from Ellie Cashman.

Though the central event space is left more open for individual interpretation, it does feature a stunning, herring bone-patterned wood floor and antique, gold-leaf chandeliers. “I think overall we achieved the balance we were looking for,” Hall says. “We wanted to have some beautifully designed spaces and also other spaces where our individual clients can express their own creativity and their own personality.” 1911 Magazine St., (504) 827-2400, ilmercatoevents.com