Long vacant, a historic church and its surrounding buildings on the corner of Burgundy and Mandeville streets in the Marigny has been renovated into a stunning 71-guest room boutique hotel.

More than 150 years ago, Irish-born architect Henry Howard designed the Sts. Peter and Paul Catholic Church and the accompanying rectory to serve English-speaking residents of the Faubourg Marigny. In 1900, a school was added to the grounds by Diboll & Owen and a private residence (originally built in 1890) adjacent to the church served as a convent for the Marianite Sisters of Holy Cross who ran the school. For more than a century, the church and school served the neighborhood’s residents, educated their youth and offered a spiritual base for the community. But as the years passed, secularization and suburban flight led to a decrease in enrollment that forced the school to shut down in 1992. These and other demographic changes also led to a drop in church attendance, causing it to close in 2001.

For many years, the Archdiocese of New Orleans held onto the property as it fell into disrepair, until it was finally let go in 2012. Although there were several developers eyeing the real estate, it was Nathalie Jordi who beat them to the altar (so to speak). Jordi, a prominent New Orleans resident, partnered with an innovative and new interior design and development firm called ASH NYC. “I live in the Marigny a few blocks away from the church, and I had been trying to do a small hotel in the neighborhood for about a year,” Jordi says. “I kind of shrugged [the church] off as being too ambitious for me to handle. Then, by happenstance, I started speaking with the ASH guys who had just opened their first hotel in Providence where I went to college. It made sense for us to team up on it together and take it on.”

Local architectural firm Studio WTA was appointed to collaborate with ASH NYC and to manage the restoration and conversion of these four iconic, historic buildings into the Hotel Peter & Paul. “We were lucky to work with a great team of architects from Studio WTA,” Jordi says. “They managed a great balance of respecting the beauty and honoring the original spaces and details, while still being creative and unsentimental about the things that needed to be done to translate it into modern uses.”

As a beloved local institution for more than a century, it’s not surprising that interesting discoveries and nostalgia abound. While pulling up old asbestos tiles inside the church, workers unearthed a 1905 penny that had dropped between the floorboards during collection. Another story unfolded after tearing out the pews from the church. “We offered [the pews] to the people in the community, and one man said, ‘I want the one that’s third from the left,’” Jordi says. As it turns out, this was the pew where he sat growing up, and he had scratched his initials — along with the initials of a girl he admired — into the wood. “The girl is now his wife, and he took it home to her. It was romantic,” Jordi says. 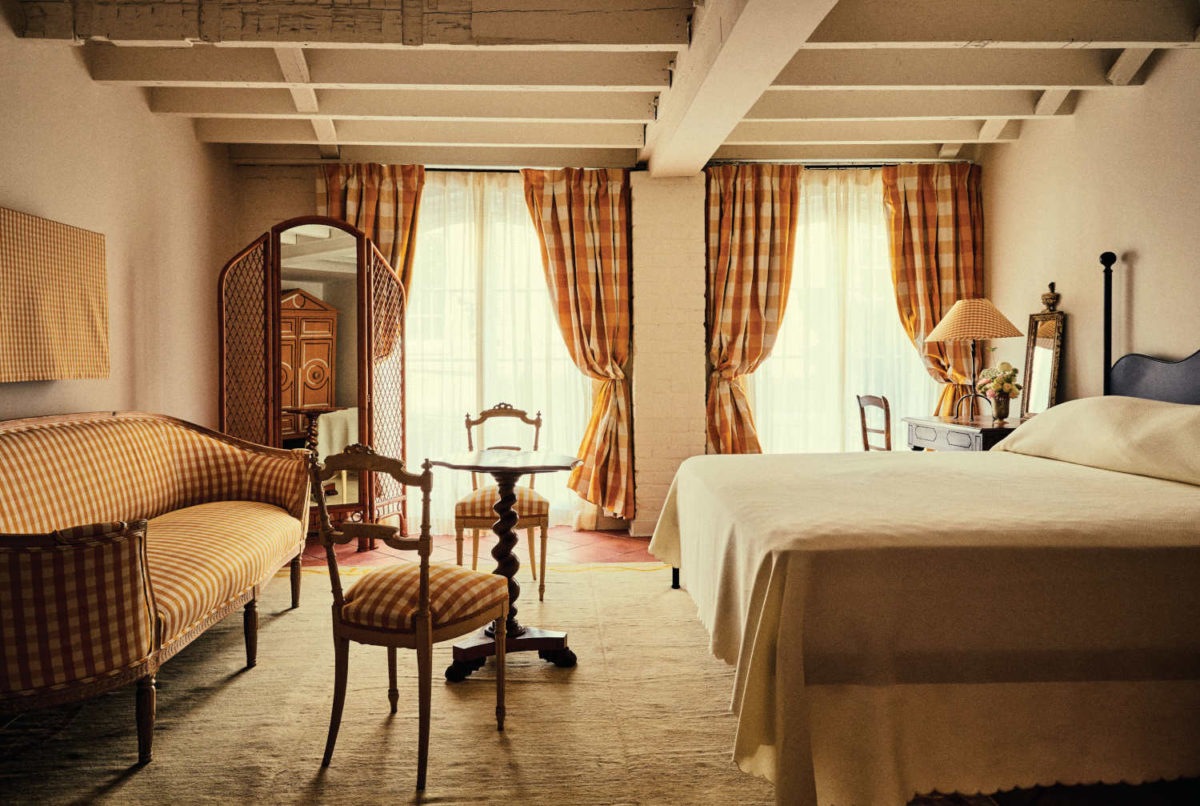 The school, convent and rectory now house Hotel Peter & Paul’s majestic rooms. Using color palettes commonly found among iconic religious paintings and tapestries dating back to the 14th through 18th centuries, ASH NYC redesigned each space with an old-world sense of mind. “We always look to something different from what has been done, and going in with a modern knife would have been boring,” says Will Cooper, partner and chief creative officer of ASH NYC. Their old-word vision seems to blend effortlessly with the building’s original features, like the wainscoting, marble fireplaces, cypress moldings and stained glass windows.

Most of the furnishings are antiques the ASH NYC team collected on extensive buying trips from the south of France, Paris, Belgium and Italy. “A lot of the furniture we were looking at were from big French castles and chateaus with an old-world feel, so it didn’t feel like something new that we had just injected into the space,” Cooper says. “We wanted to make it feel like it had been there a long time, though the design is still very clean and simple.”

Quite a few local artists and artisans also had a hand in making the hotel utterly unique. E. Kraemer Fine Metal and Woodwork in the Upper Ninth Ward created the wrought iron canopy beds in the guest rooms; Monkey Wid-A-Fez woodworkers in the Marigny custom built the armoires and side tables; Uptown furniture designer Matthew Holdren created the reception desk from reclaimed materials; and Ann Marie Auricchio painted decorative trompe l’oeil throughout the hotel, including designs on the guest room armoires and a huge mural on the third floor of the school.

“We did some research and found a list of plays that were performed there the first year the school was in session in 1900,” Jordi says. “The mural was inspired by some of those plays, and it’s just a really tranquil space — light-filled. It’s a wonderful place to work or to read or just be among the people of the Marigny.” This area, dubbed the School House Stage, is a library-like lounge with a vintage collection of titles curated by Blue Cypress Books, a locally owned and operated shop on Oak Street in the Carrollton neighborhood.

Because no New Orleans hotel would be complete without a space for divinely prepared cuisine and heavenly libations, The Elysian Bar recently opened inside The Rectory. The folks behind Bywater wine bar Bacchanal are managing the new bar, and they’ve tapped the talented Chef Alex Harrell, formerly of popular French Quarter restaurants Angeline and Sylvain, to run the kitchen. The menu features European-inspired small plates, including dishes like a rolled French omelet made with duck eggs and topped with Cajun caviar.

Finally, of all the buildings on the grounds, the one least changed in the new incarnation is the church. Though it is no longer officially a place of worship, Jordi and ASH NYC left the sacred space pretty much intact with open doors inviting folks in the neighborhood and other visitors to drop in, as well as leaving it available for both private and public events. “I feel a great sense of privilege and honor to be a part of these buildings,” Jordi says. “We feel so grateful we got to work with these buildings and we were able to keep them alive.” 2317 Burgundy St., (504) 356-5200, hotelpeterandpaul.com