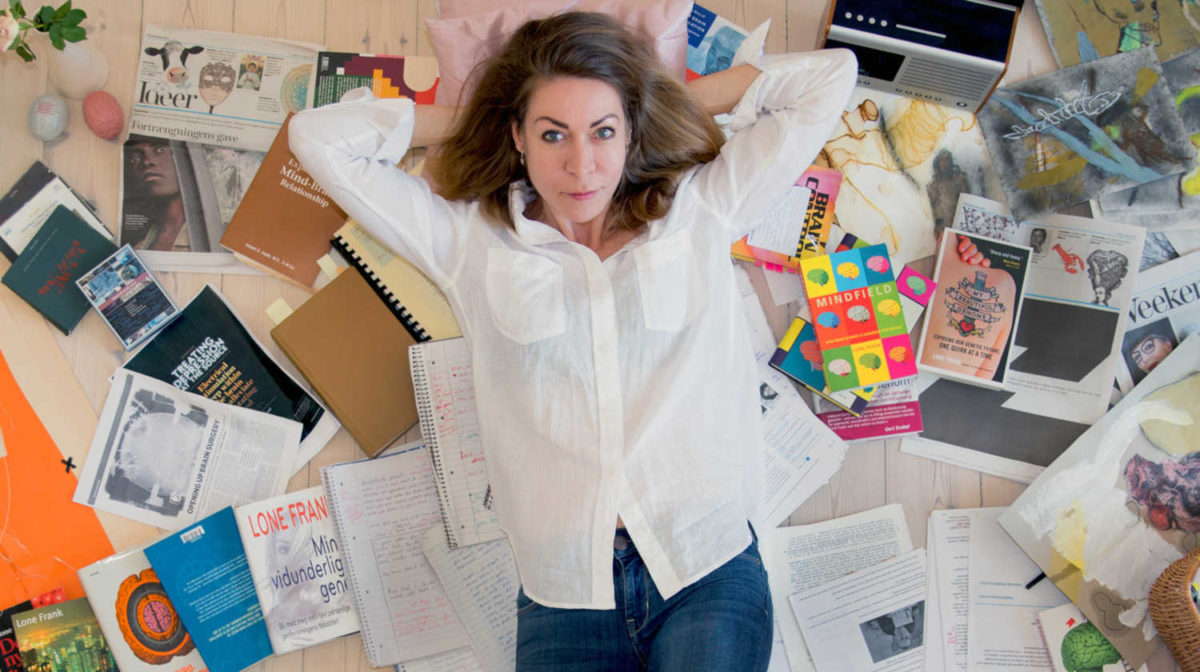 When leading European science journalist Lone Frank heard about the resurgence of deep brain stimulation — the amazing neurosurgical procedure invented in the 1980s and FDA-approved to treat Parkinson’s disease, OCD and essential tremors, and now proving favorable in cutting-edge medical trials to treat a host of other physical and mental health problems such as Alzheimer’s, arthritis, depression and addiction — her curiosity was piqued, since psychosurgery like lobotomy had been disparaged since the 1970s. The savvy neuroscientist, who holds a PhD in neurobiology, worked in the U.S. biotech industry, writes for Denmark’s leading newspaper, Weekendavisen, and has authored several award-winning books, was shocked to discover while researching from home in Copenhagen that DBS was actually invented through a series of provocative experiments in the 1950s and 1960s by Dr. Robert G. Heath at Tulane Medical School. Yet for more than half a century, Heath’s work has remained buried deep in Tulane’s archives, considered too controversial for public knowledge.

Frank became inspired to write a book to bring his fascinating story to light. Now, in The Pleasure Shock: The Rise of Deep Brain Stimulation and Its Forgotten Inventor (Dutton; March 20, 2018), Frank unearths the riveting first and only true account of the astounding work that parallels modern medical advancements, done years ago in New Orleans by a brilliant, impassioned and determined scientific vanguard, not a careless madman who disregarded ethical boundaries as he is often depicted.

“It was by chance I discovered Dr. Heath,” Frank says. “I saw this tiny note on the web that Robert Heath at Tulane University did experiments with DBS in the 1950s, 30 years earlier than the standard story of its invention in the 1980s for Parkinson’s, and here was this psychiatrist using it for schizophrenia. I couldn’t find Heath anywhere in my psychiatric history books. I thought, ‘That’s strange, if Heath was electrically stimulating specific areas of the brain using minuscule electrodes implanted in brain tissue to regulate abnormal brain activity in the 1950s, why has no one written about him?’ I saw some links that mentioned he attempted gay conversion therapy with DBS and was involved in MKUltra, the CIA’s mind-control project, and thought he might be this monstrous scientist who did weird experiments on poor people in the Deep South.” Frank contacted Tulane about Heath, but faculty refused to speak with her.

Frank then embarked on her hardest writing venture yet, which yielded The Pleasure Shock, a beautifully written, nuanced compendium that unfurls like an engrossing mystery, filled with colorful characters, gripping drama and mind-blowing scientific history in the making, definitely one of the most mesmerizing nonfiction books with New Orleans roots ever. She hunted detective-style for Heath’s hidden publications and traveled far to meet with many who helped her understand who Heath was as a scientist and as a person, including surviving colleagues, 80- to 90-year-old gentlemen with the utmost respect for their deceased mentor and friend, who lauded Heath as a whip-smart man who lit fires in them and moved science forward. She visited Rob Heath, Jr., who graciously turned over his father’s archival material, including films that Heath himself recorded of his own research, never before seen by anyone, that sat decaying for decades at Hedonia, the family’s summer home in Mississippi. She met with patients and their families, like David Merrick, known as the most violent mental patient in Louisiana — a slight man who bare-handedly ripped the door off a cop car — until Heath treated him successfully with DBS.

“David was doped up to keep him from killing,” Frank says. “I saw on film David’s parents pleading with Heath to give him a chance at normalcy. Heath’s idea was to stimulate the cerebellum with electrodes to reach deep areas to stop the violent fits, so he put a brain pacemaker in David and it worked like a charm. David was quite fond of Dr. Heath, and his sister said Heath saved their family.” After extensive studying of this treasure trove of info, Frank realized Heath’s unparalleled work in DBS had a profound effect on ailments like depression, schizophrenia and arthritis, and it was remarkably similar to work in DBS being attempted today.

“Dr. Heath was someone who did very pioneering and prescient work, who was completely misunderstood,” says Frank about the charismatic, unconventional, stubborn doctor with movie star looks, both a psychiatrist and a neurologist, lured away from Columbia University to head both the psychiatry and neurology departments at Tulane, which he insisted be combined. “Heath was so ahead of the curve,” Frank says. “I was struck by how extremely modern his view of mental illness was. The Freudians back then thought schizophrenia was from having a cold mother, but Heath was adamant that it, depression and everything else was a problem of the brain that had to be figured out and that psychoanalyzing people alone was too narrow and wouldn’t cure anyone. He realized the brain was both a chemical and an electric organ. He thought psychiatry was not just biological and not just sociological but all of it — it’s the brain and the mind. He wanted to upgrade psychiatry and he championed the reform of Louisiana’s horrible mental institutions; patients there were chained up because they’d harm themselves and their treatment was basically getting hosed down once a day. CBS did a documentary about Heath, and he was featured in national magazines. His great vision was to stop lobotomizing schizophrenics because it didn’t work — it just blunted emotions and personalities. He was very holistic and wanted to get into these deep emotional areas and electrically stimulate them without destroying the brain, and combine that with talk therapy. In the documentation he filmed, you can see the EEGs, the measurements from people’s brains as they are getting stimulated, and it’s fascinating. He was actually trying to do the same things done today with brain scans, which didn’t exist back then. He figured out new anatomical connections between the cerebellum and deep emotional areas of the brain, and he was really on the mark. Scientists today are doing similar things in DBS; they’re shocked when I tell them about Heath. They have fancy rationales about where to stimulate for schizophrenia or depression but it’s not the same rationale Heath had; now that we know more about the brain thanks to technology like MRIs, astonishingly it turns out those were the right areas. I’ve seen Heath’s films of people with severe arthritis stimulated in pleasure areas; their pain disappeared. Today electroceuticals try to cure inflammatory diseases by stimulating nerves and brain tissue, so again, Heath’s inkling was right.”

Ultimately it is the case of Patient B-19, Heath’s only attempt to perform gay conversion using DBS, that has unfairly become his legacy. “It’s unfortunate and not representative of the vast contributions to science Heath made during his 40-year career,” Frank says. “I’ve seen films; it’s clear that B-19 didn’t want to be gay. In the 1970s, homosexuality was a psychiatric diagnosis. He had other psychiatric conditions, like extreme depression, that he wanted treatment for — he wasn’t forced to do so. B-19 had trouble feeling pleasure, so Heath thought if pleasure areas of the brain are stimulated, it could help with psychiatric conditions like depression or schizophrenia because a central symptom is that you don’t feel pleasure or positive emotion. A resident of Heath’s who identified as gay insisted that Heath was absolutely neither prejudiced or bigoted. In other places, doctors were showing photos of naked boys to gay men, electroshocking their testicles until their brains were mush, trying to regress them. Masters and Johnson had a conversion program but they left that out of that TV series, because, hey, they were heroes. Another myth is he exploited poor black patients — not true at all. I’ve seen two black patients in his films who were certainly not poor, exploited people. The rest were white. It was basically who was there that had the rationale to be treated. He was known as an excellent therapist with a private practice with many well-known patients. And his involvement with MKUltra was small. And what also may have hurt him was he wasn’t political, he didn’t care what people said he could or couldn’t do, and he wasn’t good friends with the movers and shakers at the NIMH who doled out money. Some co-workers said others were jealous of him.”

After a colleague of Heath’s intervened, Frank got to speak with psychiatrists at Tulane sympathetic to her; still, much of Heath’s work is kept under lock and key by Tulane. “Tulane may hide behind HIPPA, but they might fear people will cherry pick to make sensationalist stories out of this wonderful footage, which shows Heath, his co-workers, patients and what his therapy was all about,” Frank says. “It’s medical history that should be seen by others.”

Frank believes Heath’s story serves to remind others that ethics change over time and that people should always be viewed in their historical context. “We should scrutinize what we do to see if it might seem unethical if looked at from the future,” Frank says. “It’s not like these ‘monsters of science’ want to do awful things to harm patients. Doctors may implant things or give medications that aren’t the greatest, but it seems to be right at the time.”

In 2016 Frank’s film Genetic Me won best scientific documentary from the American Association for the Advancement of Science, and, in March, Hunting for Hedonia, Frank’s feature-length documentary about Dr. Heath and DBS will debut. “Heath’s story is so visual with his old black and white 8 mm films with his patients, and you see this eerie parallel of DBS in today’s operating rooms,” she says. An in demand lecturer who’s spoken at TEDxCopenhagen, Frank will discuss Heath, and the book and film, to 1,000 neurosurgeons in New York in June at the annual congress of the World Society for Stereotactic and Functional Neurosurgery.

Frank’s other intriguing English language books — Mindfield and My Beautiful Genome, shortlisted for the Royal Society’s Winton Prize for Science Books – are highly acclaimed, and The Pleasure Shock is another captivating hit; the Danish version earned 5-star reviews. Frank hopes it will enlighten Americans, especially New Orleanians, about Heath’s major accomplishments with DBS. “I’d like people to see that Heath’s work was really interesting and important,” she says. “And hopefully it’ll give credence to him being vindicated. He certainly deserves to be remembered for doing DBS so early and for seeing it was a way forward with treating mental illness. When I visit top groups in Europe, Florida, New York and Boston, DBS is all the rage. I hope Tulane’s scientists look at Dr. Heath’s story and say, ‘Wow, that’s why there’s a chair of psychiatry at Tulane in his honor; let’s see his old films and articles, because DBS will make headlines for years to come.’” lonefrank.dk and @lone_frank