Fostering strong relationships has been the secret to the Saints’ success. 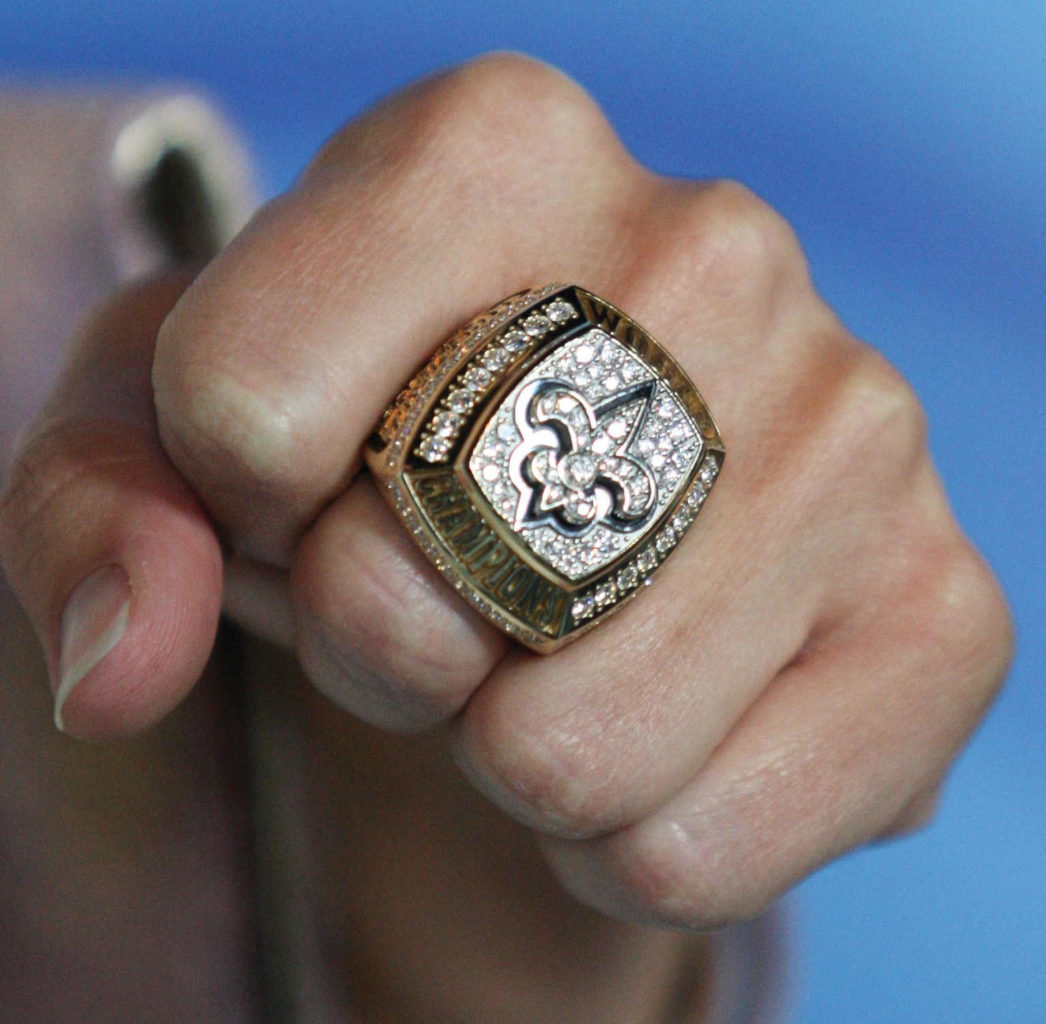 Jan. 2019 may prove to be a very special time in New Orleans. Aside from the advent of the New Year, the city will be blessed with at least one New Orleans Saints NFL divisional home playoff game, maybe a second, and, if all goes well, perhaps an NFC Championship, and a celebration of the sort that only it can do. Regardless of how it ends, this closing stanza to the 2018 season represents something unique in what has been a remarkable pair of relationships both in New Orleans and the NFL. First there is the hagiographic legacy of Tom Benson, whose passing this year gave a particular urgency to the Saints’ season and that still carries with it an impetus to win for the city that birthed his successful life beyond all odds. Benson’s spirit is best seen in the icon chosen to honor him during the year, the TB-stamped silhouette of Benson dancing with his parasol in second line fashion following a Saints win. It’s true that victories in the Superdome changed after Benson took over. They took on an exultant quality that had previously been lacking; they exuded hope not happenstance; and it was because he personally led the way on the field in the exuberance. Celebrating together was the point. Two Saints playoff wins at home, replete with indoor parade and New Orleanians at a zenith of happiness at being winners and just that, if even for a moment, would be the perfect demonstration of what Benson was about.

And secondly there is the unique relationship of Coach Sean Payton and his quarterback Drew Brees; their careers have been inextricably tied to each other, and they are seeking to reach the pinnacle yet again. Saints have been witness to something spectacular, a tandem of acumen and athletic talent rarely seen in the NFL’s long history. Before Payton and Brees arrived, the Saints had had one playoff win in 39 seasons. The losses were typically drubbings, which started either early or late. After their arrival, the team had notched seven playoff wins, including a perfect 5-0 record at home, and even the losses — in Chicago, Seattle, San Francisco and Minneapolis — were typically memorable, close and searing. The Saints under Payton and Brees have offered no calm harbor, no refuge for the unemotional. This energy seemed channeled to the fans by the coach and quarterback themselves who always have emanated a passion on the field that seemed telegraphed through the very steel beams of the domed stadium where they play.

Payton, who fell onto the Saints’ lap out of the Bill Parcells coaching tree, the same that yielded Bill Belichick, has always brought a creativity evidenced by a fascination with offensive wrinkles, mismatches, smart and fast linemen, and creating space for skill players to operate in. His first year, the wrinkles were Marques Colston and Reggie Bush; later it was Pierre Thomas and Jimmy Graham; and today it is Taysom Hill and Alvin Kamara. Brees, who similarly seemed to fall from the heavens when abandoned by the San Diego Chargers, has always been known for his mental preparation, his insistence on his and teammates’ execution, and his capacity to stretch plays to gain first downs and sustain drives. Brees’ hallmarks include focus on detail, routine and hard work, but also the development of trust, confidence and chemistry with his receivers and linemen. His special skill is generating yards and points to his team’s maximum ability, against any defense, in any environment and no matter the weapons at his disposal. His frustration flashes any time an opportunity is left unfulfilled. Together, after a solid career as offensive pass-first fire-starters, in their last two years, Payton and Brees have converted to a run-first, defensive-minded approach that seemed designed to smother opponents slowly. Walking, talking avatars of the modern forward pass, they have recently jointly generated a weekly game-plan that has — as a practical matter — been a top five defensive unit in the NFL.

The result in 2017-2018 was the Saints’ first back-to-back division titles ever. And the reason for that achievement was the ability of Payton and Brees to evolve, on both offense and defense, in the way they combatted schemes that were also evolving on the other side of the ball, and in that way, the Saints have been perhaps the most innovative team in football over the last two years. Indeed, two years ago the landscape looked ominous as the Saints had suffered three consecutive 7-9 seasons. The source of their survival, such that they could be here today to make the post-season two years running as division champions, was, as always, one part Payton and Brees, and one part Benson. As Brees has stated, the relationship with Payton is based on respect and communication.

“There’s a player/coach dynamic,” Brees said. “He’s my head coach. He is a play-caller. He is the boss. I respect that. If something’s bothering me, I have no problem telling him or if there’s communication that needs to take place, I have no problem talking to him. I think that’s the biggest thing in regards to just communication and there’s no ego. I respect whatever boundaries there might be between player and head coach. I respect that and yet there is a friendship or a bond because of our experience together. There’s a great deal of respect that allows us to communicate very freely, and nobody takes offense to anything, and it allows us to be as successful and productive as we possibly can.”

The other piece of their survival has been the stability in ownership and management brought by Benson. The insistence on maintaining the continuity of Mickey Loomis as general manager, and Payton and his staff as a unit, showed rare patience in this age of professional sports where focus on winning immediately is preeminent. While results obviously always mattered to Benson, in the final stage of his era as owner of the New Orleans Saints, he withstood the battering winds of three consecutive losing seasons, permitting Payton to rebuild and then reload. Benson’s ability to trust in the process and in his team’s leadership and core displayed a confidence and vision that may ultimately be his lasting legacy for both this franchise and the city that so richly supports it.