Getting Busy With It 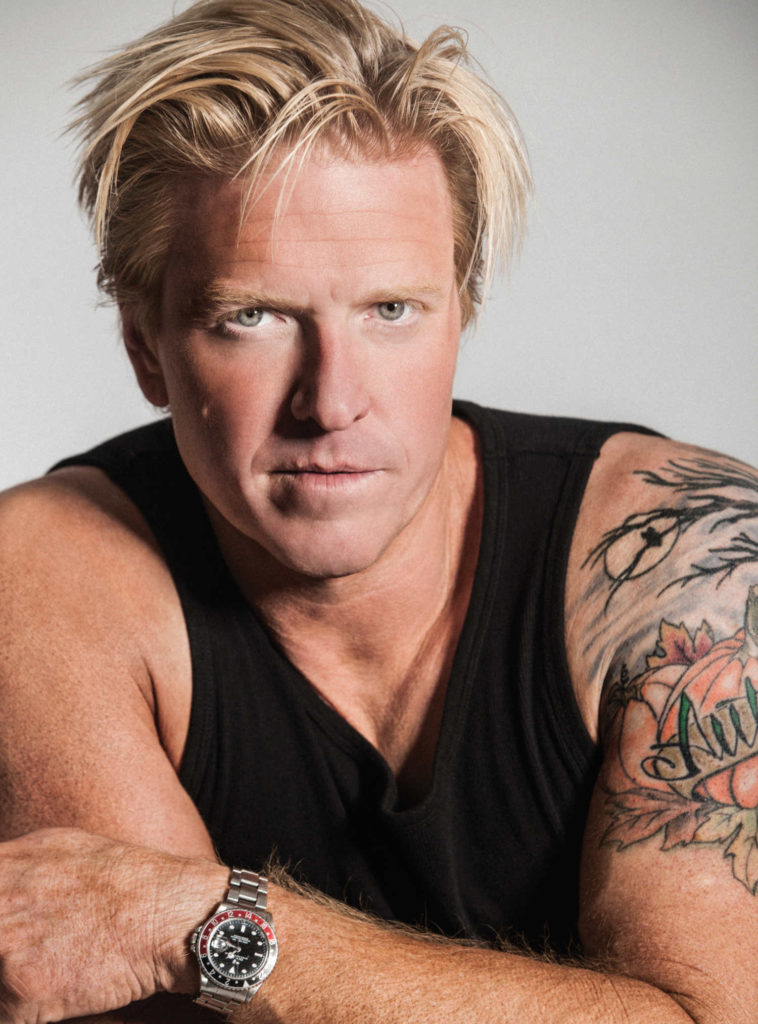 One-of-a-kind actor Jake Busey is back in action with his unique, charismatic and heartfelt performances. Humble, witty, hilarious and genuine with a mega watt smile and a sunny disposition to match, Busey has proven his talent in films such as Enemy of the State, Starship Troopers, Contact, Twister, Identity and Home Fries, and his movies have hauled in $1.1 billion at the box office. After a hiatus from acting, Busey hit the ground running with multiple high-profile projects, including a role last year in The Predator playing Sean Keyes, the son of the Peter Keyes character his father Gary Busey played in Predator 2, and in a recurring role in Marvel’s Agents of S.H.I.E.L.D. on ABC as Tony Caine. Busey is fired up about his many upcoming projects on the small and silver screens, including his roles in the third season of Netflix’s sci-fi horror series Stranger Things this summer, and in the comedy horror adventure film Dead Ant, which had its world premiere at Screamfest, and was just released to limited theaters and to VOD platforms and Digital HD.

“Dead ant … dead ant … dead ant, dead ant, dead ant …” sings Busey to the tune of The Pink Panther theme song about the comic creature feature that mashes B movie shtick with heavy metal. “Dead Ant is a hilarious horror film,” he says. “It’s Spinal Tap meets Them. This glam-metal rock band from the 80s is trying to make a comeback at Coachella, and they have this crazy peyote trip, then these giant ants come and attack them. I’m the lead singer, like a Sebastian Bach meets Bret Michaels kind of a guy. Sean Astin and Sydney Sweeney are in it and Tom Arnold is the band’s manager. It’s a fun, crazy, silly movie. We had the screening at [TCL] Chinese Theatre, and the audience was laughing the whole time.”

Busey was shocked and excited to land a role on Season 3 of Stranger Things, which premieres July 4. “Stranger Things is one of those shows where you think, ‘That would be neat if I was on it,’ and the followup thought is, ‘Clearly, that will never happen to me,’” Busey says. “When I auditioned for it during pilot season, I had auditions for different shows every day, so I was studying lines and developing characters that I’d never wind up playing. At a certain point, you kind of stop paying attention to the names of the shows you’re auditioning for. So my manager calls and says, ‘Stranger Things wants you to come back in,’ and I was like ‘Wait, I read for Stranger Things?’ Then I really started working on the material again and met with them and did the scene. Afterwards, I was like, ‘There is no way this is going to happen to me,’ and the next day my manager calls and says, ‘The Duffer Brothers already wanted you; they just wanted a good tape of you to prove to the execs at Netflix that you were worthy.’ I was like, ‘Wow, okay, now I’m on Stranger Things. I kept asking people to pinch me for two months. I felt like I was dreaming.”

Busey’s character Bruce, an old-school journalist for The Hawkins Post, hit all the right notes for him. “The show takes place in 1986 and that was like Dolly Parton in 9 to 5 time, when women at the workplace had it bad,” Busey says. “Bruce is a bit condescending, cocky, arrogant and a jokester, with that Don Rickles vibe. I didn’t understand this guy’s reality at first, but, once we did the scene, I was like, ‘Oh, that’s what’s going on, this is subtle genius here.’”

Meanwhile, in DIVOS!, an upcoming high school drama, Busey plays a helicopter sports parent of the school’s star baseball pitcher. “It’s a cute movie about three gay kids in a drama department who are totally surprised when this heterosexual jock decides after breaking his arm to try out for the school play,” Busey says. “I’m the dad of the jock that’s like, ‘Son, you’re going to play baseball and become an attorney; you’re throwing away your career doing this stupid acting stuff,’ so there’s some great moments in this film. It’s such a great script written by this kid Matt Steele that I couldn’t pass it up.”

Other films Busey will appear in are Blue Grass Spirits and Ghost in the Graveyard. “Ghost in the Graveyard was a fun little spooky independent film that I did up in Sleepy Hollow, New York,” Busey says. “I play Kelli Berglund’s character’s father; she’s got a clairvoyant side and is teased by her friends and is haunted by a girl who died when they were all kids playing ghost in the graveyard — a game I’d never heard of but apparently is very popular when you don’t live in Southern California. It was beautiful to film at night in the snowy, candlelit graveyard. And in Blue Grass Spirits, I’m the lead and play a whisky distiller in Kentucky who’s had a family tragedy and is on a downward spiral; then this very odd man comes to town and wants to include our distillery on this ghost hunting tour, which apparently in Lexington is a big thing. It’s not scary. It’s a nice little independent film, like a Hallmark Channel Sunday night movie.”

In recent years, Busey dove back into his work with a short but memorable role in FX’s hit drama Justified as a pyrotechnic specialist who imploded right after appearing onscreen. “I would’ve liked to have been a regular on a show at that time in my life, so it was hard to blow up in the first 30 seconds, but it was a good time,” Busey says. He then starred as Professor Aiden “Sex Machine” Tanner in the TV series From Dusk Till Dawn: The Series, and portrayed Samuel Wallace, famous for his legendary warning “Remember the Alamo,” in the History Channel’s mini-series Texas Rising. Busey also starred on Hulu’s series Freakish, on Showtime’s Ray Donovan and on NCIS, all which led to his recent work in Agents of S.H.I.E.L.D., The Predator and Stranger Things.

Although Busey is a natural actor who gives it his all, he was reluctant to enter the industry. “When you’re involved with something so all-encompassing and that’s what your parents are up to, it’s like being a child of the circus and being at the circus all the time,” he says. “After a while it’s not new and shiny any more; you see the elephant poop. So to carry that on was a long, thought-out choice that I had to do with conviction. I’m a bit of a perfectionist and won’t settle for not being excellent at what I’m doing. Thankfully I’ve had no bad reviews, maybe some of the movies I’ve been in, but not my work. I’m proud of that because I put my heart and soul into my work, and it’s rewarding. I like to stay positive and do the best I can.”

Besides acting, Busey loves off-road desert racing and working in his motorbike fabrication shop. As a licensed pilot, he flew his own plane. Today fatherhood is his greatest joy. “My daughter is a great, lovely kid, full of energy and wants to do lots of things,” Busey says. “I don’t fly much anymore because I don’t have the extra money, and she said to me the other day that she wants to go fly.”

Busey is also a gifted musician who writes songs, sings, and plays guitar and drums. “My dad was a musician and was always dragging me around to hang out on the road at different recording studios and backstage with his friends [such as Willie Nelson and Fleetwood Mac]. I was so young I don’t even remember when I started playing drums. My dad had a studio set up at the house, but I didn’t get my very own drum set until I was pretty old, like five.” Busey played drums for Louder Than This and snuck into L.A. clubs when he was underage to share the bill at shows with other talented up-and-coming bands like Mighty Joe Young, who later became Stone Temple Pilots.

“One night at Club Lingerie we opened for an unknown band called Tool, and then came the headliner called Rage Against the Machine,” Busey says. “I was at the back of the stage grabbing hardware from my drum set. When I heard them, I was motivated to stage dive for the first time in my life. I ran past the whole band and jumped out, and the whole crowd parted. I’m this giant 6-foot-3 guy with this big leather coat and boots flying through the air, so everyone moved to the side and I had to put my feet underneath me all of a sudden and I wound up running it off then slamming into the bar. I never [did it] again.” Busey’s band Sons of the Lawless has had their music in films such as Nazis at the Center of the Earth, which also starred Busey.

New Orleans is Busey’s favorite city in the country. “I love New Orleans and the haunted lore and the history of New Orleans and the French Quarter, and Jean Lafitte and Lafitte’s Blacksmith Shop, which had the original shutters on the windows and no electricity — just candlelight — it was really cool,” he says. “This dude Lord Chaz took us on this ghost tour, and I loved him. He told stories about that place that was the convent and the ghosts in the attic. I just love the town and I can’t wait to come back and visit. An actor friend of mine from there took me on a streetcar journey to the Garden District. We were doing Wicked Blood there and he’s like, ‘I gotta take you to this amazing place and get some Bananas Foster.’ It was a nice little restaurant and they wouldn’t let me in because I had on short pants. And they wanted me to have on long pants. And it was at lunch. It’s a different culture there, and I actually liked it. It’s nice that New Orleans still has some tradition.”

Busey is an honorary celebrity co-chair for the Louisiana SPCA’s 2019 Howling Success, which will be held April 6 at The New Orleans Advocate. “I love animals,” Busey says. “They call dogs ‘man’s best friend’ for a reason; dogs are great to have, because you get home and they’re so happy to see you and they’re always right with you. They’re good emotional support friends. And then cats are good for when you’re laying around watching TV and you need a real live pillow to hang around and lay on you and be your cuddle buddy. Animals all have different personalities and are essential for good mental wellbeing.” @thejakebusey, la-spca.org