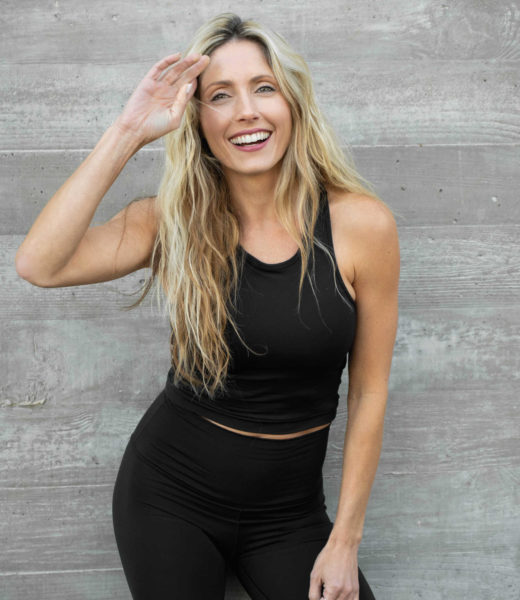 Local New Orleanian Cara Joseph is never one to procrastinate. While the mother of four certainly stays busy with her children, she wanted something to do while they were at school. She conceived the idea of MoveMe, a New Orleans-inspired activewear and athleisure brand, in April 2017 with the goal of empowering women. And with soft, comfortable fabrics in vibrant colors, the pieces in the collection pair well with each other and travel well from the gym to the street.

“While there are hundreds of activewear companies on the market, I wasn’t worried about there being room for one more brand,” she says. “I simply wanted to do something that I was passionate about — something that would fulfill my desire of design, fitness, sales and business. The urge to start was so strong for me, that I walked into a friend’s party, left 10 minutes later and started to design. I then walked into my first trade show two months later where I was determined to make contacts and began research on how to accomplish my idea.” One year later, she had the first sample of her line in hand, and she officially launched the company in Aug. 2018.

“The day of my first shoot, when I saw my creation come to life, was magic for me,” Joseph says. “I had seen the samples on myself many of times, but when the model had them on, I got goosebumps, tears and more.”

The first MoveMe collection features nine pieces total, including high-quality and ultra-soft leggings, tank tops, crop tops, sweatshirts, shorts, dresses and long-sleeved shirts. Joseph designs each piece, and everything is made in the United States. A few pieces are made with bamboo, and the main activewear pieces are made of nylon and Spandex with quick-dry technology and SPF 50 protection. “Four of the pieces come in four colors,” she says. “So, the first collection is 12 looks total, and even more looks if you color block. This was a lot to start with, but I did it on purpose because I wanted to start with a bang and be taken seriously. My most popular piece is the Rouge Legging; my second most popular is the Krewe Crop with a shelf bra.”

The vibrant colors in the collection are a direct reflection of New Orleans. “I’ve been living in Louisiana since I was 3 years old, and, although I’ve traveled the world and studied abroad in college, the South is where my soul resides,” she says. “So somewhat organically, the pieces were inspired from the colorful and vibrant facades, as well as the people, that make this state so great.”

Joseph’s love of fitness was another impetus that led her to start MoveMe. In that vein, she wanted to create a line that encourages women to hit the gym and give it their all. “I love fitness because it makes me feel good,” she says. “It is a fact, especially for women, if we like what we are wearing to the gym, we work out better. I love that if I make a piece of clothing that can make a woman feel good about herself and have a good workout, then I am accomplishing something.”

As far as finding the time to further develop her company, Joseph tries to do everything pertaining to business while her kids are in school. However, there are times when she has events in the evenings and her husband steps in. “At first I felt a little guilty, but watching them grow and mature with more responsibilities is a blessing to watch and I think it will be better for them in the future,” she says. “I spoke at my daughter’s career day last year and saw how proud she was of me. If I say I’m going to do something, I do it. I say this often, ‘I do everything to extreme; it’s a blessing and a curse.’” MoveMe is available at Hemline, Pelican Athletic Club and Sweat Active. moveme.fit