All in the Name 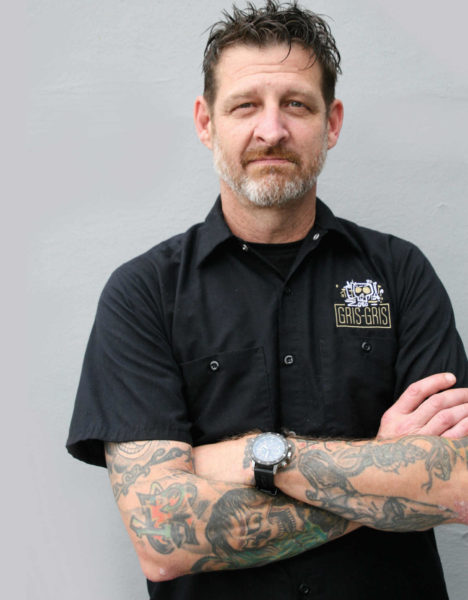 For Eric Cook, Executive Chef at Gris-Gris, food is all about bringing people together and celebrating the deep-rooted tradition and culture of New Orleans. Cook, who was born and raised in the Crescent City, loves that this is a city where people know how to throw a party for anything and everything. So when the space on Magazine Street — previously home to Square Root — became available, he jumped at the chance to bring his love of food and culture to life. And a smart decision it was. Cook recently received the Reader’s Choice Award for Eater’s Chef of the Year, while Gris-Gris won the 2018 Restaurant of the Year designation.

“The first time [my wife and I] walked inside, we could imagine how great it would feel and what we wanted to do,” Cook says of the space. “The front door opening right into the kitchen is the best way to include everyone in the action. It’s like a home, where the kitchen is always where everyone hangs out. I wanted Gris-Gris to be a neighborhood joint and for everyone to feel like it’s ‘their’ place.”

With a name like Cook, it seems that the chef has found the perfect profession. He started off cooking at home with his mother and father, both of whom inspired Cook to prepare meals that are meaningful and exemplify New Orleans cuisine. “My mother cooked classic Southern dishes, and my father cooked lots of wild game and crazy things that my sisters refused to eat,” he says. “I’ve taken those experiences and made them a big part of my own kitchen, teaching everyone how much heart and soul goes into cooking — and exposing them to how food is an important part of the culture of the city.”

However, becoming a chef was never Cook’s ultimate goal; it was just a natural progression for him. He started off his career at Brennan’s, where he soaked up everything he could from Chef Mike Roussel. After that, he spent many years at Commander’s Palace, learning and growing alongside many of the city’s best chefs. Later, at The American Sector, he had the chance to play with his recipes and start adding those dishes from his childhood back into the repertoire. “I spent a few years at Bourbon House, Tommy’s and NOSH, but I always kept up with my former colleagues at Commander’s,” Cook says. “When I decided to open my own place, the two people I knew I needed with me were Brooke Foster and Ferrel Dugas. Brooke and I have been a great team for many years, so it was a no-brainer to continue our partnership in the kitchen at Gris-Gris. Ferrel is one of the best bar directors in the city; she and I talked about opening a place together for years. We’ve also added another Commander’s alum, Christopher Nottingham, who runs front of house.”

With such a skilled staff, it’s no wonder that Gris-Gris has taken off. The menu itself also is a thing of wonder. Featuring Southern, Creole, home-cooked food, the dishes are a collaboration of dishes passed down from Cook’s family and his staff’s families. “To people who grew up in the South, it brings memories of the food they had at family gatherings and holiday meals, and local traditions like red beans on Mondays or chicken and dumplings on a cold night,” he says. “For visitors to the city, it’s a great way to give a glimpse of just how good everyone has it here.”

In addition to the main dining room with open kitchen on the first floor, and the bar and additional seating upstairs and on the adjoining balcony, Gris-Gris also features an event space called the Samedi Room. It branches off of the second-floor space and features a large dining room, an open kitchen and a third-floor lounge area that opens to a terrace on the roof with panoramic views of the Garden District and city skyline. With enough space for 20 to 40 guests, its the perfect place for parties of all kinds.

“We had a good friend build a 10-foot cypress table that seats 12, then added some funky furniture my wife found at estate sales,” Cook says. “She also scoured flea markets and voodoo shops to finish up the decorating. She reads a lot about voodoo and religious cultures, and discovered a voodoo loa (spirit) named Baron Samedi. He’s portrayed as the skull with a top hat and a cigar. We thought he was a good representation of the crazy lifestyle and personality that many chefs live and that people are drawn to.”

The name Gris-Gris also holds special meaning for the restaurant and for the people of New Orleans. “Gris-gris is a word everyone growing up in New Orleans knows, even if they don’t know exactly what it means,” Cook says. “That epitomizes our culture of superstitions and faith, traditions and beliefs that we stand behind, even if we don’t know exactly why. Technically, gris-gris is a little bag with a good luck charm or amulet. It’s something everyone needs.”

While Cook says he has been blessed to work under some of the most world-renowned chefs in the world, right here at home, he still considers himself a cook. “Being recognized as a chef in New Orleans is special in its own way, but I still like to think in my heart and actions that I’m just a cook, still working to get better every day.”

And while he doesn’t get much of a chance to cook at home, when he does, he does it big. “I have a huge cast-iron pot that is my favorite, my go-to for a big roast or chicken stew or taking all day to work up a good sauce,” he says. “We’ll take a drive to pick up fresh seafood from the Westbank market, and my in-laws are always bringing in fresh meat and veggies from local farmers. I usually start with the ingredients then figure out what we’re going to make with it.” 1800 Magazine St., (504) 272-0241, grisgrisnola.com