From Fine Art to the Culinary Arts

What was briefly the Louisiana ArtWorks building has become the New Orleans Culinary & Hospitality Institute, a world-class brainery dedicated to one of the city’s finest virtues. 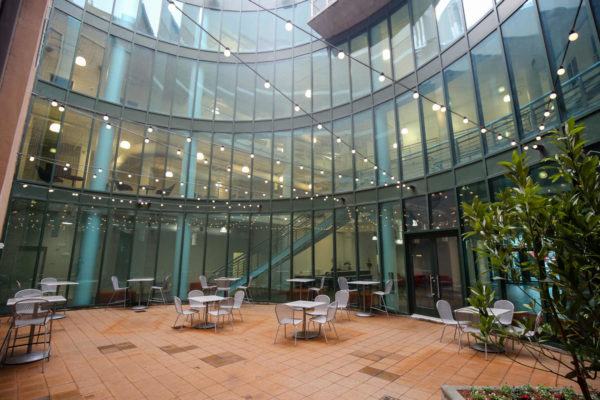 Early last month, classes began for the first full-time students of the New Orleans Culinary & Hospitality Institute now located on the corner of Howard Avenue and Carondelet Street in the Warehouse District. Aspiring cooks flowed through 93,000 square feet of space now filled with kitchen equipment, prep stations, classrooms, a beverage lab and more, kicking off their future careers as chefs in a city where well-prepared cuisine is as valued as brass bands and Mardi Gras. You could almost hear local industry leaders clasping their hands together, eyes raised to the heavens whispering, “It’s about time!”

The building that now houses NOCHI was initially intended to be Louisiana ArtWorks, an ambitious new art studio that cost a hefty chunk of change to construct, yet was barely ever in operation. Renovated from the historic 1915 Bradford Furniture Co. buildings, the project ended up being a shocking money sink with millions of dollars invested by city, state and private donations, not to mention a $7.1 million low-interest federal loan. Even after $25 million in improvements, the building was closed by Gibbs Construction Company due to unpaid bills before it ever really got a chance to get off the ground.

This architectural marvel designed by Ron Filson featuring exposed staircases and a soaring glass curtain sadly sat empty for almost a decade before Ti Martin, Dickie Brennan and the rest of the institute’s board won a bid to purchase the building in Feb. 2014. “We didn’t so much as pick the building; we felt like it was meant to be,” says Carol Markowitz, executive director of NOCHI. “Dickie Brennan and George Brower, two of NOCHI’s co-founders, were walking the space for an entirely different reason and were instantly struck with the vision of it being the locale for a culinary school.”

Local architectural firm Eskew+Dumez+Ripple was tapped to transform a structure intended for the fine arts into one designed for the culinary arts. Several obstacles had to be overcome during the project, from penetrating reinforced concrete to make room for range hoods and duct work, to the flow of the entire space. “If you think about those two building types for a minute … the way a person moves through a museum is quite different from the way a person circulates in a classroom building,” says Tracy Lea, principal at Eskew+Dumez+Ripple. “We had to create a design that radically altered the circulation patterns.” 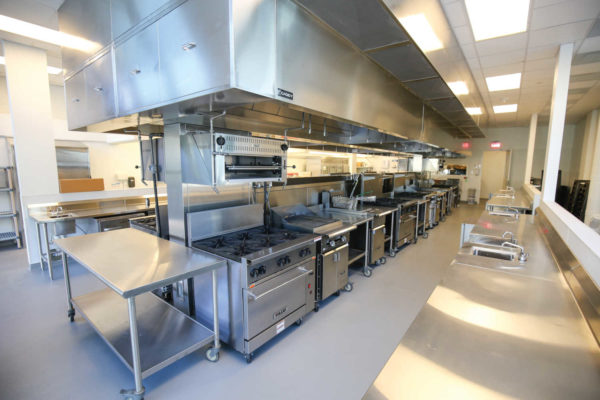 Described as “a fun little puzzle,” the project’s architects were forced to find interesting ways to fit the institute’s five teaching kitchens, separate classroom and office spaces for both NOCHI and Tulane University, a beverage lab for wine and spirits programs, an event center on the fifth floor with it’s own kitchen and terraces, and a cafe on the ground floor. “The puzzle was trying to figure out where to put all the different culinary schools’ spaces inside a building that wasn’t very accommodating,” says Jack Sawyer, senior associate of Eskew+Dumez+Ripple. “We had to make do with some spaces that weren’t ideal, and we had to find interesting ways to get the systems in place to support them.”

Part of the project’s success can be attributed to a truly collaborative effort between the designers, owner and contractor. Input from NOCHI’s board of directors, Tulane University and contractors Woodward Design + Build had a great impact on the result, which fortunately became everything everyone had hoped for. “Tracy and I are both extremely proud of the project,” Sawyer says. “It’s been four years of effort, and we couldn’t be more happy with the results.”

Though most of building isn’t open to the public on a walk-in basis, local residents and visitors can enjoy the NOCHI Cafe by Gracious on the ground floor. Gracious, a prolific city bakery owned by Megan and Jay Forman, has brought in chef Michael Doyle (formerly the chef/owner of Maurepas Foods in Bywater) to create the menu. Offerings include an array of Gracious’ fresh-made pastries, breads, sandwiches and desserts, plus seasonal, signature dishes with Doyle’s flair like piri-piri fried chicken with a cornmeal waffle; Moroccan meatballs; and roasted chermoula cauliflower with Bergeron pecan quinoa.

Currently, NOCHI is offering Culinary Arts and Baking & Pastry Arts certificate programs consisting of five months of intensive, hands-on instruction through partners, but there are more exciting programs are just on the horizon. The institute will also house portions of Tulane University’s A.B. Freeman School of Business programs including new offerings in Entrepreneurial Hospitality, providing well-rounded study in the culinary arts and hospitality industry under one roof. There are also plans for separate courses for the culinary enthusiast from the Fundamentals of Cheese class to a Louisiana-specific series starting with The Lost Restaurants of New Orleans. “We’d love for people to visit our website if they’re interested in spending time in our kitchens, taking an enthusiasts class or signing up for a tour of the entire space,” Markowitz says. “And ultimately, if they’re a prospective student, signing up and starting our program as a culinary arts or pastry student.” 725 Howard Ave., (504) 891-4060, nochi.org