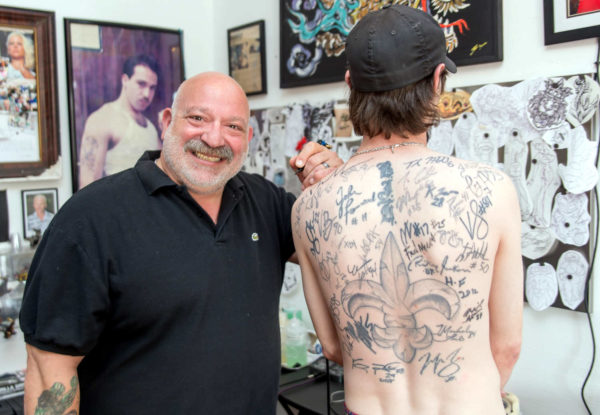 Owner of the newly opened Catahoula Tattoo & Gallery, Dominic Sgro performed his first tattoo when he was only 17 years old, and, since then, he has done nearly 3,000. “I had an amazing mentor, the late Mike Nicholson, and, to this day, I apply his techniques,” he says. “I was a sponge back then; I soaked up everything he taught me.”

Sgro grew up in East Haven, Conn., where he opened New Haven Tattoo in 1999. He later moved to South Florida and opened The Original New Haven Tattoo in Boca Raton and was co-owner of Art with Sound Tattoo in West Palm Beach. After moving back to New Haven, he met his wife, and when she was offered a job as a public defender here in New Orleans, they both jumped at the opportunity. “We both fell in love with the city and the people we met here, and I knew it was the perfect place to open my next tattoo parlor and gallery,” he says. “In addition, we’re both avid dog lovers and got not one but two Catahoula Leopard dogs. Since they’re the Louisiana State Dog, I thought it was a fitting name for the shop.”

Sgro opened Catahoula Tattoo on North Broad Street last July. Prior to the opening, he was working as a guest artist around the city, but he was eager to attack a vision he had for what a New Orleans tattoo parlor should be. “I wanted to embrace the culture first and foremost and then mix in the craft of tattooing,” he says. “For instance, we offer live music; local artists can exhibit here; and musicians can play here. If you take the music, the art and add tattoos to it, well, now you’ve got something special, something truly New Orleans.”

He chose the location for his shop because he wanted it to be near the French Quarter but not near another parlor. And while North Broad Street may lack foot traffic, it is well traveled and busy. “The community has welcomed me openly,” he says. “Also, I collaborated with famed muralist Jules Muck to paint our overhead. We’re the only parlor with an original Muck. After that went up, the locals really took notice, not to mention tourists stop and take selfies in front of our door.”

Catahoula Tattoo is unique because of the connection that Sgro makes with each of his clients. “You can get a perfectly good tattoo anywhere in the city, but I try to make it a memorable experience,” he says. “There’s no flash on our walls — images of tattoos you can pick from — so nobody can come in and order the No. 12 with fries. Everything we do is custom, hand-drawn in front of the prospect. That’s how you get them involved in the process. You collaborate and come up with something unique.”

As far as the art exhibitions at Catahoula Tattoo, Sgro offers wall space to local artists so they can exhibit on a 30-day rotation. “We had Brandy Hirsch, Tylar Avery, Lady Rorschach and Masks by Raven, and, every first Saturday of the month, I offer a sidewalk art sale where vendors can sell their works without any fees,” Sgro says. “I know how hard it is to sell your work, and I always felt I would never charge to exhibiting artists.”

Events at the tattoo parlor also are always a fun time. For the Grand Opening in July, Sgro had
DJ Tanner Danny spinning R&B and three separate keyboardists, including local musician Cyrus Roe. He had Friday the 13th projected on the wall during Catahoulaween, where clients competed for gift certificates with the best dressed and best decorated bicycle, and, in December, he had Sinatra Saturday in honor of Frank Sinatra’s birthday. He recently had Shawan Rice, The Soul Songstress, play Valentine’s Day weekend. Coming up on March 23, look for Catahoula Night Fever — a disco theme with a bubble maker that shoots more than 1,000 bubbles per minute. “All events are BYOB, but the coffee is always free,” Sgro says.

While trends in the tattoo world come and go — Sgro says he’s done plenty of Playboy bunny logos, ZigZag logos, Chinese symbols and tribal tattoos — it’s the watercolor trend that he loves the most. “I decided to offer our Catahoula logo free to anyone who wants it, along with our free coffee,” he says. “Some restrictions apply, but a dozen people are sporting it now. Even two bartenders at the Circle Bar had to get it. It’s more of a movement in it’s infancy than a trend, but we’ll see.”

And if he could tattoo anyone? “I would’ve loved to tattoo ‘Guernica’ on Picasso’s back exactly the way he did it, black and gray,” Sgro says. “But I’d settle for tattooing Spaceman Spiff on Bill Watterson. I have had the privilege of being the official tattoo artist for the Ultimate Saints Fan, Brian Henry. Brian had all his Saints memorabilia stolen from him a few years ago and had an idea to have Saints players sign his back with sharpie markers and then get the signatures tattooed on him. He’s up to 33 signatures, and we’re currently trying to get Drew Brees as the crown on the cake.” 929 N. Broad St., (504) 655-9818, catahoulatattoo.com