The New Orleans Film Society marks its 30th anniversary this year with a Patron Party (7-8 p.m.) and Gala (8-11 p.m.) on March 16 at The Farrell Estate. The evening includes gourmet dishes, craft cocktails and live entertainment to support independent cinema in the Crescent City. The gorgeous Mediterranean-style Smith House, now the Farrell Estate, was built in 1906 for the president of the New Orleans Cotton Exchange, William Smith, and sets the tone for a gorgeous event.

VIP tables ($3,000) includes Patron Party tickets, dedicated seating and cocktail table service for eight guests. Guests who purchase a Patron Party Ticket ($400, or $350 for NOFS Members), will receive a Gala ticket and the opportunity to tour two levels of the home, plus toast the New Orleans Film Society’s 30th anniversary with hors d’oeuvres by Marcello’s, bubbles and more. Meanwhile, those who purchase a Gala Ticket ($300, or $250 for NOFS Members) will celebrate under the romantic oak trees of the Farrell estate. The gala features live music and dancing, bites from a selection of New Orleans’ top restaurants, craft cocktails provided by Absolut Elyx, Buffalo Trace, Glenlivet Founder’s Reserve, Avión Tequila and others, and an opportunity to bid on once-in-a-lifetime experiences at a live auction. 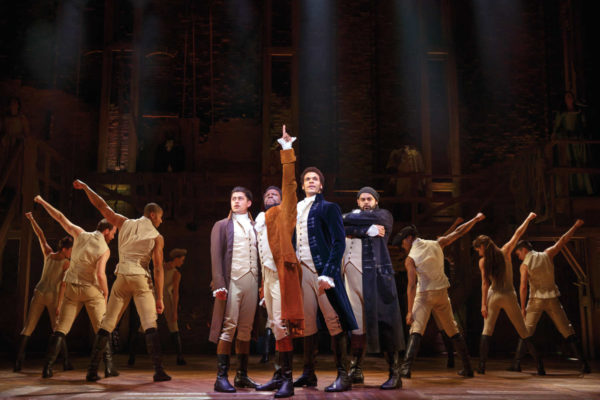 The 2018-2019 Broadway in New Orleans Season kicked off in September with Aladdin and has also included School of Rock, Les Misérables and The Book of Mormon. However, the much-anticipated Broadway musical Hamilton anchors the season and takes to the stage with a three-week run March 12-31.

Based on Ron Chernow’s biography of founding father Alexander Hamilton — an immigrant from the West Indies who became George Washington’s right-hand man during the Revolutionary War — the performance features music and lyrics by Lin-Manuel Miranda, direction by Thomas Kail, choreography by Andy Blankenbuehler, and musical supervision and orchestrations by Alex Lacamoire. The incredible score blends hip-hop, jazz, blues, rap, R&B and Broadway, telling the story of America then, as told by America now.

Also be sure to mark your calendar for Come From Away, a performance that tells the true story of a small town that welcomed the world following the events of Sept. 11, 2001. This new Broadway musical written by Tony Award nominees Irene Sankoff and David Hein, and helmed by this year’s Tony Award-winning Best Director, Christopher Ashley, will conclude the season May 28-June 2. 1111 Canal St., (504) 525-1052, saengernola.com

Now on view through Aug. 31 at NOMA, Ear to the Ground: Earth and Element in Contemporary Art, features works drawn primarily from the museum’s permanent collection by 18 artists across vastly different media, cultures and time periods. Each work of art reference earth and element in vastly different ways.

Working with elements like earth, wind, water and fire, the artists demonstrate how nature can spur artistic innovation. By treating nature as metaphor for the complexities of contemporary cultural life, the artists envision new ways that we as humans relate to the world and to one another.

Exhibition programming also includes Cristina Molina’s performance of Under Three Things at select intervals throughout the run of Ear to the Ground. In this new work, which offers visitors an intimate, guided whispering tour of the exhibition, Molina assumes the perspective of the earth personified and draws from cultural mythologies of the underworld. 1 Collins Diboll Circle, (504) 658-4100, noma.org

139
previous From Fine Art to the Culinary Arts
next Fashion: March 2019