Home IN THIS ISSUE The Future of Anthony Davis
IN THIS ISSUE
SPORTS
March 4, 2019 Paul Wegmann 0

The Future of Anthony Davis

The New Orleans Pelicans look ahead to what the franchise has in store. 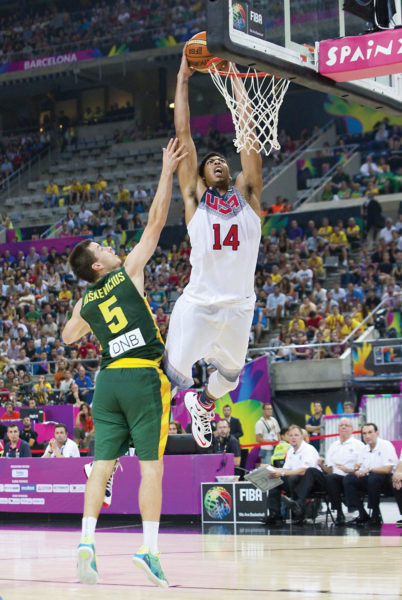 Peppered with trade rumors, the 2019 New Orleans Pelicans emerged from the NBA’s hot-stove trading period with little to show for its efforts in past years to build a team around future Hall of Famer Anthony Davis. While much national attention circulated around the future of Davis and the buckshot flying between the Lakers and the Pelicans, when the smoke settled, the team was left with having lost Nikola Mirotic and having gained Jason Smith, Stanley Johnson and a pocketful of second round picks. Mirotic, who had a career year after arriving in New Orleans to help Davis and the Pelicans overcome the loss of DeMarcus Cousins, was having an even better season in 2018-19, upping his output to 16.7 points per game to help keep the Pelicans in the race for a lower tier playoff seed.

The Pelicans’ roster moves had actually succeeded remarkably going into the prior offseason. Between Cousins, Mirotic and Rajon Rondo, the Pelicans had built quite the core of leadership and star talent. The oft stated goal, at least since the time of Chris Paul and currently Davis, of building a team around a major star, seemed within reach. But Cousins chose to bolt to the Golden State Warriors, and Rondo chose to move to the Los Angeles Lakers. Still with the addition of Julius Randle from the Lakers, and Jahlil Okafor from the Brooklyn Nets, the team had compensated with ample potential for more exciting offense and another playoff run under head coach Alvin Gentry.

Indeed, by early 2019, immersed in their usual flirtation with the .500 mark and having overcome a five-game losing streak in December, the Pelicans flew into the third week of January in a very familiar position — producing the sixth highest scoring offense in the league and, at 21-23, within striking distance of the Western Conference’s eighth playoff seed. Randle, like Mirotic before him, found Gentry’s system very beneficial as he was producing his best season ever, generating 20 points per game. Jrue Holiday again was captaining the floor and was himself having another personal best scoring season. Davis was pounding out yet another stellar season, unbelievable for its rare combination of offensive and defensive dominance — second in the league in scoring, fourth in rebounds, second in blocks overall, and first in steals and fourth in assists among power forwards. The best way to think of Davis is to imagine Drew Brees also playing linebacker and doing so at an all-pro level.

What ensued was one of the most crucial three-week stretches in club history as near disaster happened — Davis suffered a finger injury that would keep him out for up to four weeks, and, at nearly the same time, Mirotic suffered a calf injury that would also force him to miss several weeks. Without Davis and Mirotic, the Pelicans spun to losing six of the next seven games, in the midst of which Davis, through his agent, Rich Paul, notified the Pelicans he wanted a trade.

Then came an almost unprecedented volley of unsuitable trade offers for Davis from the Lakers, apparently driven by none other than LeBron James. The Lakers had invested considerable draft inventory and dollars in young talent, which, as it turned out, would never elevate to championship caliber and seemed intent on somehow compelling the Pelicans to comply with accepting any raft of them, and a bouquet of varied future draft picks, in exchange for Davis, one of the era’s greatest masters of the game.

The Pelicans ran out the trade deadline without succumbing to the Lakers’ alternating cajolements and demands, but, at the end, while still in possession of the rights to Davis, were faced with the reality that those rights would be fleeting and due to run out when Davis’ contract ends this summer. At the same time, the team did nonetheless react to the entreaties from the Milwaukee Bucks, who pried Mirotic away for journeyman ex-Pelican Smith, Johnson and four second-round draft picks.

Johnson does offer the Pelicans an effective small forward, and is a former eighth overall pick in the draft. He joins Randle, who was a former seventh overall pick, and Okafor, who is a former third overall pick. That makes for an enticing nascent core once again around Davis, but what the Mirotic trade really shows is a capitulation by the franchise on the idea of the Pelicans striving for a championship with Davis to begin with.

Mirotic is an optimal sixth man for any team serious about reaching deep into the playoffs. Explosive, a fluid passer and lethal from deep beyond the arc, he is a scoring threat that forces defenses to either open up or pay the consequences. He is the sort of weapon that teams like the Warriors, leading the West, and increasingly the Bucks, who are leading the East, value because when they collapse defenses with excellent guard play they can make extended runs by winning matchups on the perimeter.

This was the strategy that the Pelicans were pursuing under Gentry, formerly of the Warriors himself, but, with their trade of Mirotic, it appears they no longer think this is possible, most obviously because the centerpiece of it all, Davis, has decided to leave. Meanwhile, other key components, like Holiday and Randle, may have signed or resigned with the Pelicans because they saw a future with Davis as a path to a championship for themselves. Now that raison d’etre is in doubt, and the Pelicans themselves must find a new path to the future as a franchise. Having landed Chris Paul and then Anthony Davis, but having failed to succeed with them, the franchise must examine its own management and roster strategies to determine how to finally move to the next level.