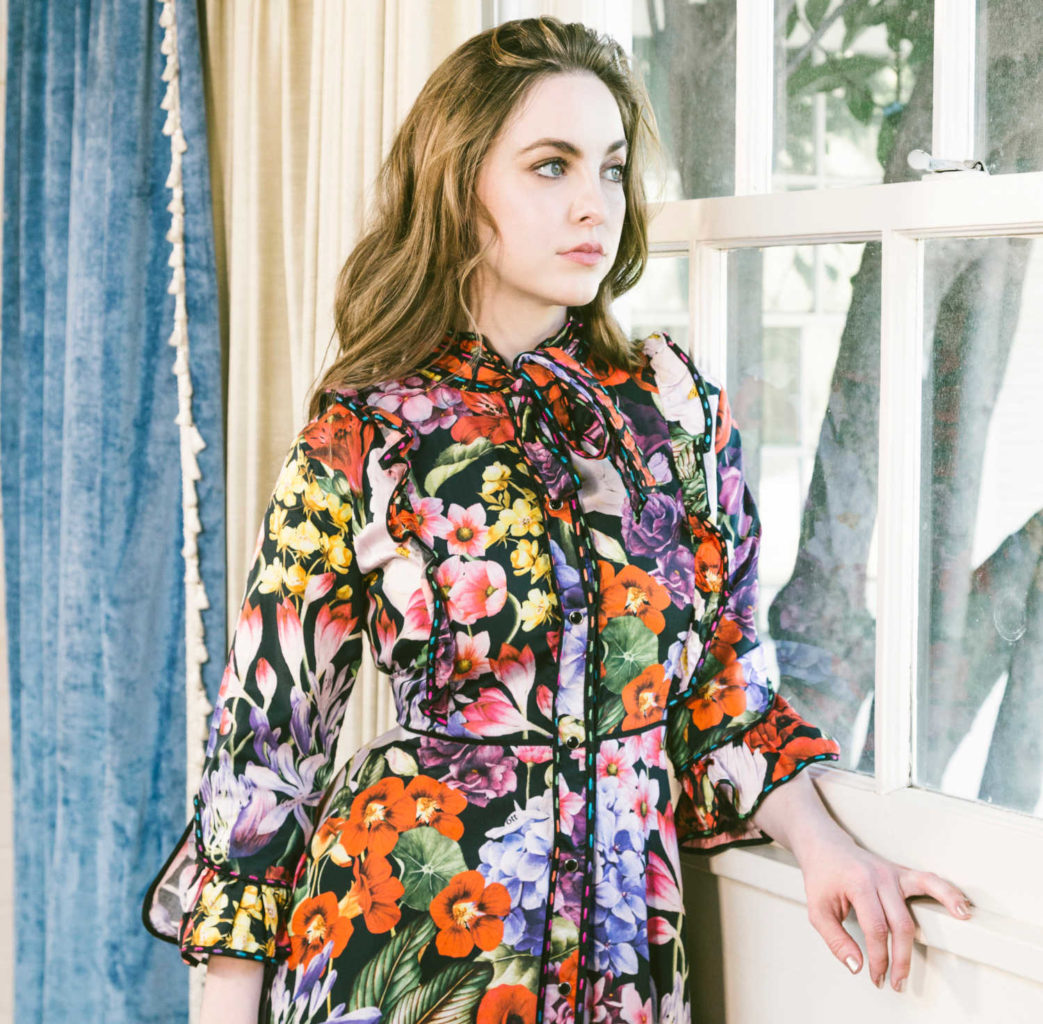 Actress Brittany Curran is on one heck of a magical ride. The witty beauty stars as Fen, the acting High King of Fillory, on Syfy’s fiercely popular fantasy TV series The Magicians. The show revolves around a secret institution called Brakebills University, which offers its students a curriculum in magic and where they learn that the magical fantasy world they read about as kids is actually very real and poses a dangerous threat to humanity. The Magicians, based on The New York Times best-selling young-adult fantasy trilogy of the same name by Lev Grossman, made its compelling Season 4 return Jan. 23 and has garnered critical acclaim as the millennial magicians move forward on their exciting journeys. After suffering plentiful hardships, things are turning around for the better for Fen this season as she becomes more determined to discover her destiny, while ruling over her alluring Narnia-esque kingdom.

“I always explain the show as a grown-up Harry Potter,” says Curran, who’s a series regular on The Magicians, which airs its final episode of Season 4 April 17. “There’s the real world, which mostly takes place in New York City, and there’s Brakebills University in New York, which is like Hogwarts, and then there’s Fillory, which is our magical world on a completely different plane. Margo, the real High King, had to leave Fillory so she put me in charge as acting High King at the end of Season 3. Fen went through this really dark period beginning at the end of Season 2 that lasted through Season 3. It started with me being in an arranged marriage with Eliot [played by Hale Appleman], and, what’s worse, is that I’m married to a person who’s only seeing it as him being in the arranged marriage. My husband kept forgetting that his wife is also stuck with him as well. So I’m already caught up in this sucky thing, and then getting kidnapped by evil fairies at nine months pregnant was no fun.”

Curran is thankful that Fen is now coming into her own. “What I love about this season is that Fen is finally experiencing some semblance of happiness and finding her own path for the first time in her entire life,” Curran says. “She starts to learn that sometimes to save the thing that you love the most, which is Fillory for Fen, you have to save yourself first. She sacrificed her happiness, health and her whole life to save Fillory, and she’s finally realizing you can’t destroy yourself in the process. Even in the world of magic, it’s neat to have this very human way of dealing with things like mental health. Fans of The Magicians say they’ve struggled with depression, anxiety and trouble just leaving their house, and seeing Fen start as a meek, almost weak character who then finds her voice somehow through all the chaos, has been inspiring. People love how the show deals with real-life problems and doesn’t make mental health this scary, taboo subject. I struggle sometimes with anxiety and being able to talk about it and have your favorite characters who are literally magicians still struggle with mental health makes you feel you’re not alone.”

Curran says she feels Fen is finally healing and forgiving Margo, who had sold her baby, and is even finding a newfound love for Margo. “Margo and Fen go on an adventure together this season, which is cool and also a nice redemption story,” Curran says. “I always tease Summer Bishil, who plays Margo — she is incredible — ‘But remember, you sold my baby!’ We definitely come around and form this incredible, weird, complicated friendship. In one scene this season, Fen and Margo have high tea with another queen, and I’m like, ‘Okay, thank God! There’s finally some levity.’ But the tears aren’t over for Fen. There’s definitely some rough days on set ahead for Brittany!”

As for Fen’s marriage with Eliot, Curran is unsure of their status. “What’s funny is I honestly don’t know if they’re together still,” Curran says. “At this point, all we know is that Eliot is still stuck inside of The Monster. Every morning the prop guy gives me my wedding ring, so that’s the only indication I’m still married to this dude. Fillory is archaic in many ways but advanced in others; whoever you’re attracted to is whoever you’re attracted to in Fillory. Attraction isn’t linked to gender. The canon is that lots of people actually have a husband and a wife. And Fen’s had enough with her crappy husband. So I hope she has a wife next, quite honestly.”

Because Fen is the character Curran has played the longest in her career, she’s attached to her and was thrilled to hear that a fifth season was ordered earlier this year for The Magicians. “I feel like Fen is real, I mean, without being crazy and thinking it’s real,” Curran says. “I feel so close to Fen and protective of her, so hearing the show got picked up for another season means your little friend gets to live another year.”

Making it in Hollywood was Curran’s goal at a young age. She grew up in Massachusetts, mainly in Cape Cod, before moving to L.A. with her supportive family to pursue her dream. “I took acting classes in Boston, and, when I was 10, I went to an IMTA convention in L.A. and an agent/manager spotted me,” she says. “They wanted to sign me, and my dad had already given his resignation to his job, but, we took our time, and I got offers for representation; then we moved out to California about six months later and it all fell into place.” Curran soon got her first job on the hit FOX comedy skit series MADtv, and she went on to book roles in films and TV series such as 13 Going on 30, Go Figure, Legally Blondes, Twisted, Chicago Fire and Men of a Certain Age, for which she won a prestigious Peabody Award for her work.

Even before landing the role of Fen on The Magicians, Curran was fascinated by magic. “I’ve always loved fantasy, science fiction and mysticism — all of it,” she says. “My dad got me a magic kit when I was little. I always go to Harry Potter World at Universal Studios Hollywood, even by myself, and get some butterbeer, and I’m a wizard or witch or whatever. Recently in London, I visited the cafes where J.K. Rowling wrote Harry Potter — I nerded out pretty hard. I love storytelling through the fantasy and science fiction genres; it takes away your preconceived ideas because it takes place in a different reality. On the show, Fen doesn’t have any magical powers that we know of — but, of course, I am the only series regular with no magic, and I’m jealous. I always tease the writers to go ahead and write it into the script. I want the magic.”

Curran regrets not being in the pilot episode of The Magicians, especially because it was filmed in New Orleans. “The cast loves New Orleans, and I’m the only one who wasn’t there,” she says. “I’d love to walk around the city and see the incredible architecture of the French Quarter and the mansions of the Garden District and visit the old cemeteries. I’d love to go to Mardi Gras, and try the French Creole and Cajun cuisine. When I think of New Orleans, I think of mysticism, history and The Princess and the Frog. And my favorite song of all time is The House of the Rising Sun. I think of the spirit of the people and the spirit of the people who lived before, and of the resilience of the people and the culture after Hurricane Katrina. The people [there] love New Orleans, and they are such a big part of it.”

With The Magicians currently on hiatus before Season 5 shoots, Curran is staying busy. She’s an executive producer on a documentary about Scotch whisky called The Water of Life. “The majority of it takes place in Scotland and our main storyline revolves around master distiller Jim McEwan, an amazing man who’s a rock star in the whisky world,” Curran says. “I’m also doing my first voice in an animated feature film that’s not been announced yet.” FraXtur, a limited TV sci-fi series about millennial teens trying to survive a post-apocalyptic world, also premieres this year and stars Curran as Aria Campbell. And Curran has been traveling plenty, recently vacationing in Shanghai with longtime boyfriend, James Ingram.

A little more than five years ago, Ingram had a heart transplant, and Curran was moved to learn more about organ transplantation. “Everybody should be on the organ donation list,” Curran says. “There’s no reason not to be a donor; every major religion agrees with it and being a donor doesn’t affect your health care. There really is no downside to it. Sometimes people get scared of the idea, but your organs will go to waste unless you donate them.” Curran is involved with Donate Life, which is holding a 5K/1K run/walk April 27 at Cal State Fullerton. “I have a team and we raise money for Donate Life,” she says. “If people don’t live in Southern California and can’t make it to the race, they can donate on my page on olf.convio.net/goto/brittanycurran, or they can sign up and come do the race with me.”

A self-professed cat connoisseur, Curran is an honorary celebrity co-chair for the Louisiana SPCA’s 40th Annual Howling Success Gala, being held April 6 at The New Orleans Advocate on St. Charles Avenue. “I love animals so much,” she says. “They’re basically the best parts of what humans are. It makes me sad when people dump their animals, because they forget that animals have souls, love and memories too. Our cat, Lady Purrsbury Duchess of Meowington, ranks No. 1 in our family, so organizations like the Louisiana SPCA with adoption programs are so important because they give these creatures a chance at a new life they deserve. Dogs are actually my first love, and we’ll be adopting a dog and a kitten soon, and we’ll see how Duchess does, because, of course, her opinion matters most. We have a big backyard, and all our friends have dogs, so we want to have dog parties and let them all run around in the yard. You get so much unconditional love from a pet. Even when I’m having a hard day crying and my cat just runs in the kitchen for food and could care less about me, she’s still amazing.” @brittanycurran, @magicianssyfy, @wateroflifefilm, @donatelife, la-spca.org