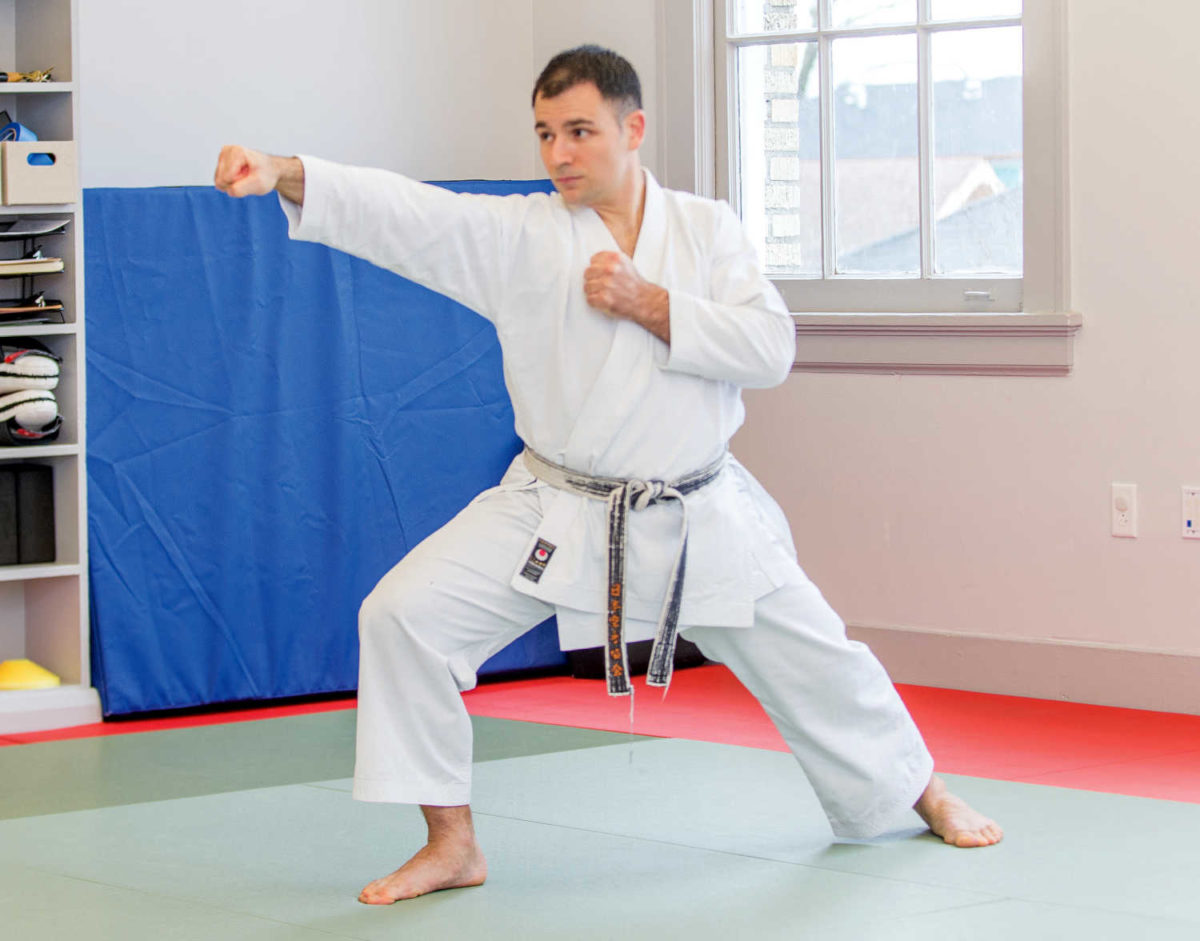 New Orleans native Dimitri Papadopoulos, martial arts instructor and owner at New Orleans Shotokan Academy, is fortunate to have parents from Europe. As a result, he grew up spending a lot of time overseas, and he trained extensively in martial arts programs in the United States, Italy and Greece. He was drawn to athletics at a young age, and he played soccer for fun.

“My father, Kyriakos Papadopoulos, was so involved in the martial arts, so I was exposed to martial arts classes from a very young age,” he says. “I started judo in an after-school program when I was four and living in Milan, Italy. When we moved back to New Orleans, my parents enrolled me in the legendary Nobuo Hayashi judo program, and, a few years later, I started karate with my father at Tulane University where he was conducting classes. As I became older, I also started training karate with Takayuki Mikami in Metairie, in Italy with Carlo Fugazza and Hiroshi Shirai, and in Greece with Tetsuo Otake. All of these individuals, who I trained under, are world-renowned martial artists and amazing human beings, and they gave me the inspiration to make this a career path.”

After Hurricane Katrina, a friend asked Papadopoulos to take over the JCC Uptown Karate program because the previous instructor had moved out of town. He accepted the position and began to teach professionally in early 2006. “I only had four or five students, but, believe it or not, some of those students are still involved in karate, and that gives me tremendous pride,” he says. “Now I teach over 100 students throughout the city at different locations, but you have to start somewhere.”

Nowadays, Papadopoulos’ goal is to teach martial arts to as many individuals as possible in the New Orleans area. “We have the NOSA Dojo at the Broadmoor Arts and Wellness Center, our main hub, where all of our instructors train together and teach adults and kids classes in three martial arts: karate; judo; and aikido, as well as yoga. NOSA also runs programs at other institutions: Tulane University; Xavier University; JCC; Isidore Newman School; Lusher Charter School; and McGehee School.”

For Papadopoulos, the best part of teaching martial arts is sharing his passion with others. He also loves the fact that martial artists of various generations have devoted their lives to the art. “This is because the martial arts that have been successful over time are complete systems for a fulfilling life in that they offer you health, happiness, improved physical abilities, development of your artistic side and, of course, it is a practical approach to exercise in that it offers you self-defense,” he says.

Papadopoulos, who also teaches biology at Delgado Community College during the day, prefers to exercise early in the morning to ensure that he is still improving his techniques and abilities. His fitness routine includes solo martial arts training, calisthenics exercises, running and impact training (either hitting a punching bag or the traditional wooden striking board used in karate — a makiwara). “When I teach in the evenings, I train with my students and spar with them to keep my eyes and reflexes sharp,” he says. “On Saturday mornings, I train my father’s advanced karate class followed by his judo class. On Sunday, I am usually too tired to move very much so I take it easy and focus on family time.”

ON STAYING MOTIVATED
“I believe that if you teach, you have to be training every day, so that is part of my motivation,” Papadopoulos says. “As I get older, I stay motivated by trying to be the best that I can technically be. I know that if I stay in shape, I will feel younger and more energetic. Martial arts is the fountain of youth, because you often witness well-trained older individuals moving better than the younger ones. As humans, we are built for movement, and martial arts is a great way to move.”

HIS DIET
“In the mornings, I wake up with coffee,” Papadopoulos says. “I have learned that in order keep my body fresh and energized, fruit, seeds and nuts are the way to go early in the day. Later in the day, I eat a lot of vegetables: carrots; broccoli; cauliflower; onions; zucchini; tomatoes; and lettuce. To ensure my body has enough protein to stay strong, I eat lean meat and fish. Of course, living in New Orleans, I also participate in the guilty pleasure of eating food that is not the healthiest, and I often crave fried foods [and starchy foods]. If I could eat ice cream every day without suffering the consequences, I would.”

CLIENT SUCCESS STORY
“In general, martial arts is a life-changing endeavor,” Papadopoulos says. “Participants improve their fitness; they learn a vast amount of endless information; and they gain confidence through martial arts. Our classes make individuals stronger and more flexible, while imparting the knowledge that has been handed down one generation at a time. Most people don’t know this, but martial arts have existed since the dawn of civilization, and there are murals in Egyptian tombs with moves that look exactly like the moves that we practice today. The martial arts not only improve us in the present, by they connect us to the past.”

WISE WORDS
“Martial arts is an activity that can be for the entire family,” Papadopoulos says. “It can be something you and your friends and family can all get involved in. Secondly, New Orleans has been a martial arts hub since the 1960s, so there are a lot of great programs around here. Do some research regarding the school and the programs they offer. Read up on the history of the martial arts that you are practicing. Find a school that you feel comfortable in, where instructors can inspire you to be better than you were the day before, both physically and mentally. And remember that martial arts is path you take in life, so think long term with your goals, and enjoy the journey.”