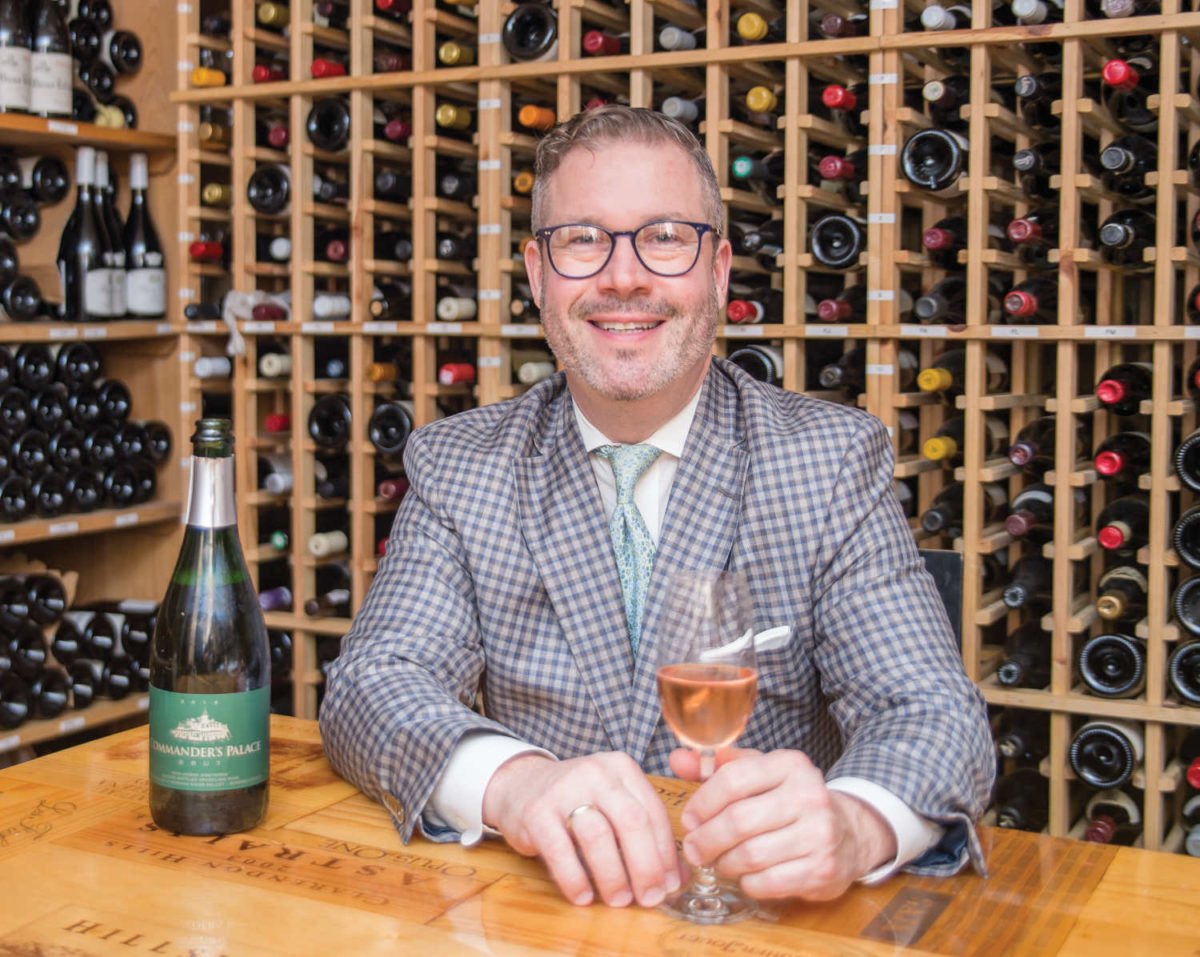 Serving as the Wine Guy (yes, that’s a real title) at Commander’s Palace since 2008, Dan Davis was introduced to wine while working at restaurants during college. He was a history major, and it turns out that a love of history and wine go hand in hand – as do great food and wine. Davis is a self-proclaimed history nerd, and he enjoys learning about the history of wines, wine regions and winemakers. “If you want to delight people in restaurants, you had better learn about wine,” he says. “And it’s such a joyous and interesting thing to study. You can never know it all.”

Davis, who moved to New Orleans for college, immediately fell in love with the city. It’s a city he describes as getting “into your blood — your soul — and you can never settle for a ‘normal’ city again,” he says. “New Orleans, in my opinion, is the most European of American cities — in all the best ways.”

Speaking of European cities, Davis’ favorite wine region by far is the south of France – specifically the Rhône Valley, the Languedoc-Roussillon, Provence and the Sud-Ouest. “The diversity of wines is astonishing; the natural beauty is unparalleled; and the people are among the friendliest on earth,” he says. “I’ve also enjoyed exploring America’s West Coast from the Central Coast vineyards of California to Napa and Sonoma to Oregon and Washington State. We have some truly amazing wines right here at home — and the airfare is a little more affordable.”

While his favorite wine region is the south of France, his favorite wines of all time are tied to his personal experiences, which he also believes to be true for most people. “I remember tasting through the amazing Lebanese wines of Chateau Musar with Serge Hochar, a hero to many in the wine business and tragically lost to us,” Davis says. “That man could speak to the very soul of his wine in a way that few others could ever hope to do. [It was] magical. Tasting in the cellars of France, every now and then someone will bring out — and dust off — a bottle that was made by a grandfather or great-grandfather — wines that had to be hidden from the Nazis. And to share such rare and magical things is the very essence of wine for me.”

Yet other wines serve as a reminder of a special place or time in Davis’ life. The wines of Clos Ste. Magdeleine from Cassis on the Mediterranean coast, for example, reminds him of standing in one of the most beautiful places on earth, drinking wine and smelling the salt air. “And it’s always great to make new friends,” Davis adds. “I love what’s happening in Sonoma Coast, Central Coast and Washington State right now. [There are] truly world-class wines that have yet to have their stories told. Keep an eye on Texas, by the way.”

Davis, who first became a certified sommelier while running Café Adelaide in the Loews Hotel, says that no matter what he did in the restaurant business, he always drifted back to the wine side of things. “I kind of feel like wine chose me,” he says. “It just never stopped speaking to me. And then Ti Martin and Lally Brennan were foolish enough to give me the keys to cellar and start paying me to have fun!”

Davis took over the cellar at Commander’s Palace in 2008, a little more than two years after Hurricane Katrina when no one was quite sure if New Orleans would recover. But the team at Commander’s Palace decided to invest heavily in the wine cellar and in the restaurant. “Commander’s Palace had been here well over a hundred years, and we chose to have faith,” Davis says. “We increased the size of the wine program by more than 300 percent and started focusing on training and education like never before. With a few years of very hard work, we built a wildly successful wine program, won the Wine Spectator Grand Award and received a James Beard Foundation nomination for best wine program in America.”

Indeed, the wine selection at Commander’s Palace is a thing of wonder. Because of the amount of space in the cellar, many wines are allowed to age so they can be poured when they are ready to be enjoyed. There’s also a large table for 12 guests where the restaurant hosts wine dinners.

“There are always around 45 to 50 wine by the glass on the wine list, and we offer all of them in half-glass pours as well,” Davis says. “I sometimes pour rare or highly allocated wines to let people try them. We have over 3,600 different wines in the cellars, but only about 3,000 on the list. The rest are waiting for their turn to shine. Of the many rare and special bottles we’ve collected over the years, my favorites are the 1928 Château Cos d’Estournel from St-Estèphe in Bordeaux ($5,500), one of the best vintages of the 20th century, and the 1945 Domaine Comte Georges de Vogüé Grand Cru Musigny from Burgundy ($5,200), one of the few wines remaining in the world from France’s victory year vintage.”

The wine list at Commander’s Palace is heavily focused on French wines, in keeping with the French political and culinary heritage here in New Orleans. As such, there’s a bevy of Champagne, Burgundy and Bordeaux from which to choose, as well as an extensive collection of wines from the south of France. “For the most part, a wine makes the cut when I taste it and think, ‘Wow! I can’t wait to pour this for someone and see how they react,’” Davis says. “As far as must-try wines, I’d say spend some time exploring the wines by the glass. There really is something there for everyone. And if you can tell me a couple of wines that you really like and how much you want to spend, I’ve got about a 98 percent chance of finding a wine on our list that will delight you. And a pretty good shot at amazing you.” 1403 Washington Ave., 504.899.8221, commanderspalace.com