A Day at the Races

New Orleans’ Forgotten Sport Gets Its Due 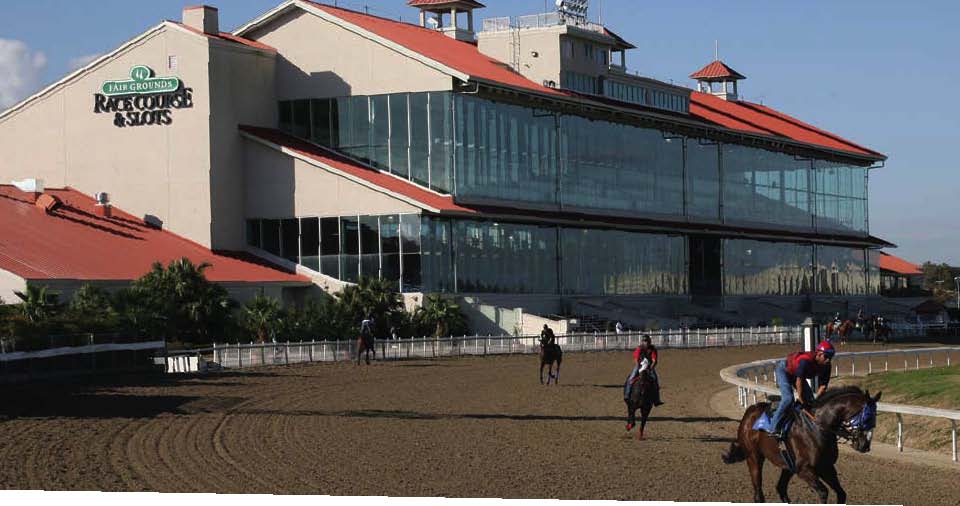 The city of New Orleans struggles daily with the concept of progress versus reliance upon its past. It is a special place partly because it can so naturally weave its history with the contemporary world, yet sometimes the things that seem most promising and in keeping with tradition are overlooked. And so it is with what was once considered the Sport of Kings: horse racing. The sport has a past in this city, dating to the middle of the 19th century, and to this day it boasts one of the best venues in the country for enjoying it, Fair Grounds Race Course & Slots, a Gentilly destination since 1872.

In the winter, after the Saints have been eliminated from the playoff race (as they usually are), New Orleanians find another pastime to enjoy. With yet another disappointing debacle in Chicago leaving the Saints 7-7 and out of the Lombardi Trophy chase and the Hornets’ likely playoff run a couple months away, this year appears to be no exception. Meanwhile, a great opportunity to enjoy the outdoors and some real gamesmanship while watching incredible athletes (albeit equine ones) in a unique venue is always available, just off the sloping lanes of Esplanade Avenue.

The old Fair Grounds grandstand was destroyed by fire in December 1993, but in a key symbol of civic regeneration, a new one was built in its stead in 1997. After Hurricane Katrina did significant damage to the structure, it was updated by its new owners, Churchill Downs Inc. Upon entering, participants are treated to a veritable hoi polloi of hardscrabble characters mixed with nattily dressed gentlemen and everyone in between. The races are truly a sport for the Everyman, and its multifaceted fan base is exhibited in the several strata of mini-venues at the park itself. One can sit in the bleachers on ground level or walk about on the apron next to the track, or head toward the gardened paddock and watch the horses up close before each race or head inside to the wagering windows where the hustle and bustle of the betting actually takes place. On the second and third levels, there is an enclosed area with more warmth and better views of the track, and for the first time reserved areas appear. Then, finally, upstairs on the fourth and fifth levels, one can pay for entry to the Clubhouse and a secluded view of the proceedings. Out of all these choices, though, perhaps the best studied not to mention most enjoyable way to watch a race appears to be the one at ground level, grabbing a Daily Racing Form, making calls based on the horses’ histories, trots and gates while evaluating the jockeys’ demeanors and glares, followed by establishing a fixed position right on the finish line.

But let’s face it, horse racing is the one sport that actively includes a betting component as part of the competition itself, at least to the extent that it takes place within the venue. And so ultimately the key is to pick the right horse, and there is no limit to options as to how to do so. In fact, it may also be the one major sport that allows attendees to actively participate, because after all, a great deal of the joy in going to the races is measuring up the competition while also secretly knowing you may have figured out just a little bit more than the next guy about what’s going to happen. Indeed, the track is full of self-proclaimed experts whom you can talk to or overhear, either to your great gain or peril, depending on their expertise or motives in letting you eavesdrop. Every bettor’s beginning handbook is the Racing Form, which provides a base of knowledge as well, and you can believe what it offers or not. The form will provide inside dirt on the track, the trainers, the jockeys and, of course, the horses.

All this information, studied and analyzed together, can give the horse fan the opportunity to combine his or her gut feeling with some objective evaluation that the bet he is about to make is the best one and cannot be spoiled by the vagaries of luck. Meanwhile, the big, beautiful animals at the center of it all are always present. They are perhaps its greatest factor, and how they run can be entirely a matter of their heart or the subtle gestures of the jockey, himself employing tricks crafted over centuries. The fact that such unpredictable elements as skill, desire and discipline can play such a role in the fortune or disaster of the bettor probably is what truly turns this enterprise into a sport as opposed to a mere gamble. At the moment when a horse comes rumbling down the track and by sheer will and determination overcomes and bests a supposed favorite, the racing fan, watching him cross the finish line from feet away, can truly enjoy a sense of satisfaction that somehow he knew it was going to happen because he had seen something intangible that no one else had.