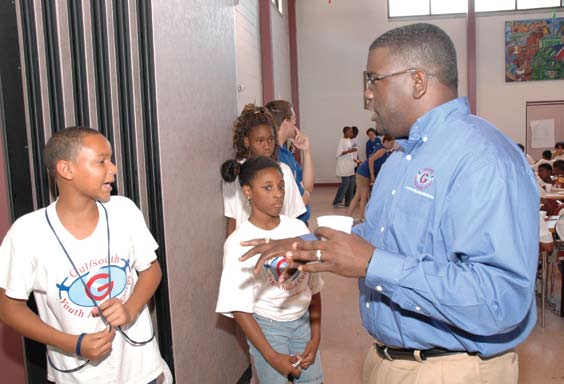 Kyshun Webster Sr., 32, began educating children when he was still a child himself. A peer tutoring program he founded in elementary school was the seed for Operation REACH, a nonprofit educational organization Webster started as a Xavier undergraduate. Today, Operation REACH helps educate local schoolchildren through after-school tutoring programs and builds young leaders through its Gulfsouth Youth Action Corps. The work has been praised nationwide. Through a $1 million grant from the Corporation for National and Community Service, Webster will expand his programs to Georgia and Alabama.

How did you get involved in education?

It started when I was in elementary school. Our teacher used peer tutoring in her third and fourth grade combination class, and she encouraged us to continue working with each other during the summer months. I took it up and continued tutoring until I went on to high school.

What motivated an 11-year-old to show such initiative?

Being retained in the first grade and feeling humiliated by that. I had a grandfather who died that year. And then I had an uncle that was brutally murdered, which caused our family to flee from public housing to the Lower Ninth Ward. I went inside myself and was not coping well. My first grade teacher failed me, because I wasn’t able to focus. As a result of coming out of that, I became this overachiever who had to prove myself. And I decided at an early age that I wanted to help other kids to undo some of the humiliation that I felt.

Was the tutoring program a success?

By the second year, it grew to about 35 kids from the neighborhood. Teachers started referring kids to my parents’ garage for the summer months. After spending the summer with us, kids who were borderline failing would go back to school reading at level.

You were studying art education at Xavier when you founded Operation REACH. Why did you start a nonprofit educational group instead of becoming a teacher?

Sometimes you’ve got to stand outside the system to be the critic. We want to be more than the critic, though, we want to show by example that a strategic, one-on-one approach can find solutions to the problems of educating the young.

Over the last decade, how has Operation REACH changed the lives of New Orleans children?

We’ve seen academic success in all the kids that we have worked with, because we’ve measured those things. That’s what made us different from the onset. We have strong university partnerships, and they were meticulous about evaluation. We’ve also had success creating community focused leadership in college students. The college volunteers in our programs get rigorous experience in community organizing and working at the grassroots level. Those young leaders who helped us start the program are now all doing phenomenal work.

What is the ultimate goal of Operation REACH?

We’re concerned with building a cradle-to-college pipeline. We are opening a child care center that will serve the early developmental needs in children from 0 to 3 years old. Then they’ll move on to our elementary after-school program, then on to our middle school youth-development programs, like the Gulfsouth Summer Youth Camp. Finally they’ll go on to our high school program, College Bound. And once they are in college, those young people will come back to volunteer and continue their commitment to service by working with Operation REACH.

How did your mission change after Katrina?

Kids are resilient. They’re more concerned about not being passive bystanders, really wanting to be engaged in bringing things back. The Gulfsouth Summer Youth Action Camp [which began the summer after Katrina] wasn’t just about playing basketball and having fun, it was about service, civic engagement and young people having a voice in what their communities would look like.

Will we ever have equitable education?

If we can elect our first black president, that gives us hope for anything being possible in this new America. I am optimistic, and I remain open to the possibility that change can happen. And I think post-Katrina we are seeing the beginnings of a turnaround in public education.

For more information about Operation REACH, visit www.operationreach.org or call 599-5941.

174
previous Sending an SOS
next Thinking About Tomorrow