Cornerstone of the Community

Ochsner Hospital is fundamentally important to New Orleans, and CEO Pat Quinlan wants to keep it that way 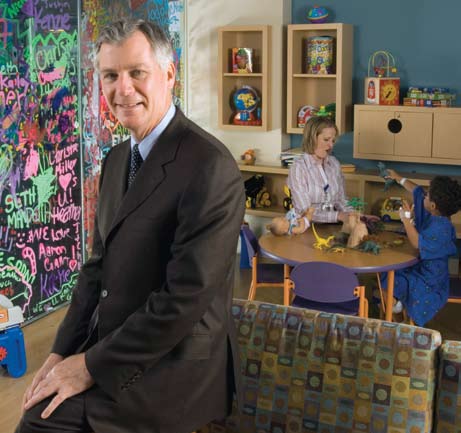 When most New Orleanians talk about Ochsner, the largest health-care system in Louisiana, they say “Osh-ner,” but in actuality, founder Alton Ochsner pronounced his own Germanic last name (and his hospital’s) as “Oks-ner,” with a hard “k” sound. Dr. Pat Quinlan, the current CEO of Ochsner Health System, recalls an anecdote in which a saleslady at a Canal Street department store instructed a member of the Ochsner family about the “correct” way to say her own name: “Dawlin’, it’s Osh-na.”

“I find it endearing,” laughs Quinlan. “That’s the New Orleans way of saying it.”

And it goes to show how deeply Ochsner Health Systems is enmeshed in New Orleans culture, not to mention the city’s economy. “We are the largest private employer in Louisiana, with about 10,000 employees,” Quinlan points out. “And the jobs we provide offer benefits and a future. The economic side to this is huge.” He adds that with Ochsner’s emphasis on education and medical training programs—it’s the largest independent, nonuniversity medical educator in the country—the organization is an important workforce pipeline for the state overall as well.

While Our Lady of the Lake hospital in the capital can boast that it’s the largest single campus in Louisiana, Ochsner Health Systems stretches across seven hospitals and more than 20 clinical locations, from Baton Rouge to the bayou, from Raceland to Slidell. “It’s about staying as close to patients as possible, about their convenience,” says Quinlan.

The model is one of “integrated care,” according to Quinlan. The main hospital on Jefferson Highway is comprehensive, but the community hospitals and clinics are nodes of a greater system, which also specialize in particular niches. For example, the Kenner hospital draws patients from around the country for its program treating carcinoids (neuroendocrine tumors). The Baton Rouge hospital has pioneered robotic gynecological surgeries, in particular robotic hysterectomies that allow for much quicker recoveries than regular hysterectomies. This integration calls for coordination of care between physicians, and it means that medical records are electronically shared across the system, something that was quite useful during all the post-Katrina displacements. It also encompasses other elements like the Ochsner-owned Elmwood Fitness Center, geared toward the prevention of medical problems through exercise and nutrition.

Dr. Pat Quinlan came to Ochsner as chief medical officer in 1998 from Lovelace, a health system in New Mexico with a similar integrated structure. While working as a dermatologist for Lovelace, Quinlan frequently made suggestions about how processes could be improved from an economic standpoint. He recalls, “ ‘Why don’t you just do it yourself?’ they asked me. So I did. I started taking on more administrative duties.”

At first, however, Quinlan had no plans to be a doctor. He majored in economics from the University of Texas in Austin and then received a prestigious fellowship to the Lyndon B. Johnson School of Public Affairs. He was considering becoming a lawyer but realized he hated the career path he was on. Switching his focus to medicine, the only foot-in-the-door job he could get in a hospital setting was for the grand position of dishwasher. “I’d worked as a dishwasher before in college, but it was a little humbling, after being a hotshot in the world I’d left behind.” He eventually attended medical school at the University of Texas in Galveston and completed his residency at the University of Alabama in Birmingham.

Having advanced from dishwasher to CEO at one of the country’s major health organizations, he plans to stay where he is. “People get on this ladder mentality, but I’m focusing on doing more of the same,” he says. “Our project at Ochsner is to digest all the facilities we’ve owned or have acquired. We’re in the middle of a project that’s incomplete in a difficult environment.”

That difficult environment, of course, is post-Katrina New Orleans affecting all area hospitals. Local Medicare reimbursements are insufficient and lagging, labor shortages are stretching resources, and operating costs overall have gone up. “It’s not just one thing. Four or five challenges have converged all at once,” says Quinlan.

In the meantime, the United Health Foundation ranked Louisiana as dead last in its 2008 list of healthy states, citing factors like a 31 percent obesity rate, a high percentage of children in poverty, a large uninsured population, high levels of infectious diseases and many preventable hospitalizations.

“Hospitals can help with some public health measures, but this is really an issue for the state and for schools,” Quinlan comments. “It’s a question of culture, education and lifestyles. As a society in Louisiana, we have to work on making healthy living a way of life. We don’t need more emergency rooms. That’s the wrong end of the problem.”

Quinlan himself practices what he preaches regarding healthy living. On a typical weekend, he rides his bike 15 miles along the Uptown levee near his Riverbend home, does Pilates for an hour and lifts weights for 30 minutes. During the work day, his office treadmill gets almost as much use as his computer does.

1.99K
previous TLC’s Tastemaker
next Up to the Challenge