A real treat on Mardi Gras Day is to venture off the beaten path of St. Charles Avenue or Canal Street and stumble upon a resplendent procession of Mardi Gras Indians: the shake and jangle of tambourines and call of ancient chants; feathered headdresses, like explosions of saturated color, strutting through a tight crowd.

Even more thrilling is to witness a meeting of two tribes. Once a violent confrontation when Mardi Gras Day was a time to settle scores among feuding gangs, today’s meetings are a ritual dance of respect, a playful challenge where each gang’s big chief steps up and circles slowly, eyeing the other up and down. Who’s the prettiest? Who has the best suit?

A way to celebrate Carnival

Mardi Gras Indians have been around for more than 100 years, longer according to some sources. It’s unclear when African American males began masking as native American Indians. In the early days of Mardi Gras, blacks weren’t allowed to join krewes, or parade in any capacity other than to light the way as flambeaux carriers. Masking and parading as Mardi Gras Indians was a way for African Americans to join in the Carnival revelry.

Some theorize that Mardi Gras Indians modeled themselves after native Americans in honor of their assistance during times of slavery (native tribes, like the Seminoles, offered shelter and welcomed runaway slaves into their communities). The races fought alongside each other for civil liberties, and they intermarried. Blacks who became enmeshed in native communities became known as black Indians.

Slaves had off on Sundays and, along with free people of color, came together at Congo Square to sing, dance and play the music of their native lands. The African and Caribbean influences at these gatherings became important elements in Mardi Gras Indian tradition. 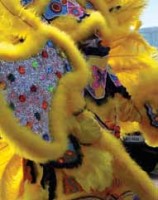 Some modern-day members, like the late Big Chief Tootie Montana of the Yellow Pocahontas, are descendents of black Indians and carry on the traditions of their fathers and grandfathers. Their extravagant suits are beautifully handmade works of art containing intricate designs of beads, sequins, rhinestones and colorful plumes. Making a suit is time- and labor-intensive. The year leading up to Mardi Gras is spent designing and hand stitching the next year’s suit. A big chief’s suit can cost upward of $5,000, involve thousands of hours of workmanship and weigh in at about 150 pounds. Not until Mardi Gras Day, when the Indian emerges from his doorway in full regalia, is his suit seen by anyone. Traditionally a suit was destroyed and recycled into a new suit for the next year. Today, with demand from collectors and museums, suits are often sold or placed on display.

The months leading up to Mardi Gras are filled with weekly meetings held in neighborhood haunts during which songs, chants and tribe-specific signals and dances are practiced. Each tribe follows a hierarchy, which may vary slightly according to tribe and locale (there are Uptown and Downtown Indians), but the big chief is always king, and usually the eldest member. Ranking is evident when the Mardi Gras Indians parade, with members playing traditional roles. The spy boy, or the tribal scout, leads the procession as lookout for trouble or rival gangs, signaling the big chief to what lies ahead. Next in line is the flag boy who carries the gang’s symbol; he is the liaison between the big chief and the spy boy. Then comes the wild man or medicine man to keep the path clear. He often has horns on his suit or carries a long staff. There may follow second and third chiefs and queens, and a trail chief.

The folk music sung by Mardi Gras Indians has its lyrics rooted in the Creole patois and is always accompanied by percussion instruments. The song normally sung at the start and finish of any Mardi Gras Indian gathering is “Indian Red” or “Indian Prayer.” Dr. John’s definitive 1992 version includes the traditional chant (“Mighty cooty fiyo, hey la hey, hey la hey / I’ve got a big chief, big chief, big chief of the nation / Wild, wild creation / He won’t bow down, down on the ground / Oh how I love to hear him call Indian Red”) woven around his calling out the names of all the big chiefs. 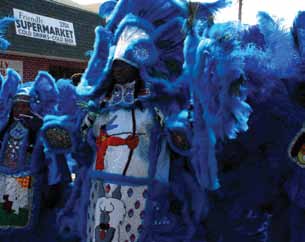 considered an old folk song, “Jockamo” (an old myth say it means “jester”) was written in 1953 by Sugar Boy Crawford and is one of the first popular songs to utilize Indian chants: “Iko Iko” was a victory chant and “Jock-a-mo” was a battle yell. The song tells the story of two confronting tribes, beginning with the meeting of the spy boys as one tells the other “I’m going to set your flag on fiyo.” “Jockamo” has been covered by numerous musical groups including the Dixie Cups under the title “Iko Iko,” the Grateful Dead and Zap Mama, who performed their version in the opening scene of the film Mission Impossible 2.

Many tribes have recorded songs, but none are as well known in music circles as the Wild Tchoupitoulas and the Wild Magnolias. The Wild Tchoupitoulas, who perform often with the Meters, recorded one album in 1976 on which several of the Neville Brothers contributed; the album covered popular songs “My Big Chief Got a Golden Crown,” “Hey Pocky Way” and “Meet the Boys on the Battlefront.” But the Wild Magnolias and Big Chief Bo Dollis have attained a musical status as yet unrivaled by other Mardi Gras Indian tribes. Their first recording in 1974 was “Smoke My Peace Pipe/ Handa Wanda.” The success of this single led to future albums, a performance at Carnegie Hall and bookings as the opening act for Aretha Franklin, among others. A number of local musicians have played with the Wild Magnolias, including Snooks Eaglin. And Big Chief Bo Dollis and Big Chief Monk Boudreaux of the Golden Eagles have performed together on the road and collaborated on several recordings, most notably on their version of “Jockamo.” 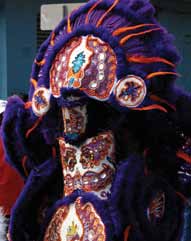 Today there are 25 to 30 Mardi Gras Indian tribes. Besides Mardi Gras Day, Mardi Gras Indians traditionally emerge on one other day: the Sunday closest to St. Joseph’s Day, known as Super Sunday. They parade down Orleans Avenue from Bayou St. John to impromptu routes through other neighborhoods. Of course one can usually catch a small parade weaving through the crowds at Jazz Fest, too.

Whether it’s brass band or jazz music, king cakes or mystic krewes, or Mardi Gras Indians on Carnival day, New Orleans is a special kind of place, with unique customs and traditions that make it unlike any other American city.