As with tradition, Rex and its commissioned artist have their designs on Mardi Gras

To even the most casual observer, it’s evident that art is a large part of the Mardi Gras tradition.

Just watch a Mardi Gras parade, with its elaborate costumes and floats. Go to one of the elegant balls. Visit the Rex Room and other Carnival rooms at Antoine’s, the Mardi Gras exhibits at the Presbytere. Some traditions, however, are less evident to the public. One is the Rex Proclamation. In 1872, during the post–Civil War Reconstruction era, the proclamation began as a means of publicizing Mardi Gras, announcing the date of the celebration and enticing tourists—aka “the King’s subjects”—to gather and join in the festivities. In those early years, the Rex organization posted the proclamation in train depots around the country, and it can take credit for helping to popularize New Orleans’ Mardi Gras celebration as a tourist attraction. Now, of course, Mardi Gras’ fame has spread worldwide. Continuing the tradition, each year Rex commissions a local artist to design the proclamation around the current theme. This year, local artist Ed Dyer got to do the honors. Dyer is from Massachusetts, but he has lived in New Orleans, with a few job-related interruptions, since 1959. After years of seeing pictures of the city and hearing about its charms from relatives who’d visited, he says, “I wanted to come and experience it myself, and when I did, I fell in love with it. I never left.” Recently, New Orleans Living talked to Dyer about his interesting and eclectic career and about his work on the 2009 Rex Proclamation.

I’m originally from Massachusetts. I went to the School of Fine Arts at Boston University.

You deferred your career as an artist while your son was growing up.

Yes, for almost 30 years. My family had a bad habit called eating. They needed to eat. You can’t raise a family on an artist’s salary.

What else have you done?

I had a PCS change [permanent change of station, in the military] from the Philippines to Biloxi, Mississippi. I was in Mississippi for about four years. After that, I left the military and became an engineer with the Boeing Company. I moved into graphics in connection with the Saturn V lunar project. I also started my own corporation, and I worked at that for around 25 years.

So when your son was grown up you decided to go back to your first love?

Right, though my first love is my wife. Art is my second love. I worked at my corporation for 25 years, and then I decided it was my turn. With my family’s blessing, I sold the corporation and returned to art about 10 years ago, for the first time in 25 years.

How did you transition into art full time?

I jumped in with both feet—it was sink or swim. I have been very blessed to have been in about a half dozen international juried art shows. That gave me the courage to continue pursuing my art. I have done very well and been very successful. I have one gallery here in New Orleans [the Carol Robinson Gallery] that represents me, and we’re very comfortable together.

How did you get involved with the Rex organization?

They seek out popular local artists to do their proclamation every year. My work is collectable, and some of the people in the organization have seen and liked my work. They thought I would be a good candidate. I was very honored to be asked.

How did you design the proclamation. 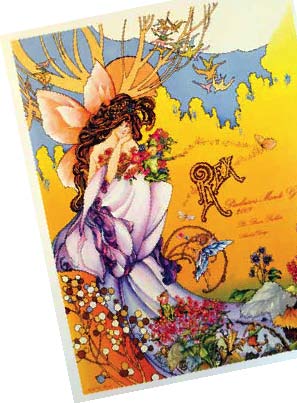 The Rex theme for 2009 is the spiritual spring. When they told me that, I immediately knew what the painting would look like finished. It led me back to my childhood, hearing stories about fairies, elves and wood nymphs—and made me think of the colors and flowers and freshness of spring, coming out of a long winter slumber. Out of that grew the whole concept of the proclamation.

How much discretion do you have in designing the proclamation?

There are certain specific things that must be in the proclamation. It states that Rex proclaims Mardi Gras for that year, and states that the Rex School of Design has created the proclamation. But the design, the content and the artwork is up to the artist. You have a lot of flexibility … because they want your work to be spontaneous as well as compliant with the theme for the year. I happened to be very fortunate, because they were very enthusiastic with the first comprehensive that I put to them. They gave me the go ahead, and that was it.

When is the proclamation shown to the public?

I attended the official opening of the Mardi Gras season in Gallier Hall in early January. At that event, the Rex Proclamation for 2009 was unveiled. I was asked to give a small speech, which I, of course, did.

Yes. They are always highly collectible items. The artist receives 50 prints as artist’s proofs. There’s also a monetary award of $1,500, as an honorarium and to cover the artist’s expense. The money is not the main thing as far as I’m concerned. It’s the prestige and the honor of being asked to be part of the tradition.

162
previous Big Easy Reads
next Against All Odds