The talk of war

Museum hosts WWII conference that brings together historians and veterans 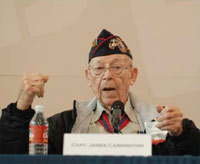 Our country is losing World War II veterans at an alarming rate. With roughly 1,200 of the former soldiers, airmen, sailors and Marines dying each day, the importance of the International Conference on WWII, held at the National World War II Museum in New Orleans, was not lost on anyone.

Held November 16 through 19, it was one of the most significant gatherings of historians, journalists, Medal of Honor recipients and veterans of the war ever assembled since the war ended more than 60 years ago.

The conference had been scheduled for last year—the actual 60th anniversary of the war’s end—but as with so many other events scheduled last fall, it fell victim to Hurricane Katrina. The museum staff designed and organized the conference for a general audience, so being a scholar, veteran or history buff was not a requisite. The emphasis was not only on battles, conditions and those who took part, but a good deal of discussion was on what the war means to us today.

“Presenting this conference and reopening the museum in the aftermath of Katrina demonstrate the resilience of the American spirit,” said President and CEO Dr. Gordon “Nick” Mueller. It is also yet another example of the regeneration of the city.

The WWII Museum was founded by the late Dr. Stephen E. Ambrose, professor, historian and prolific author of best-selling books on various subjects in American history. The Stephen Ambrose Historical Tours, another brainchild of the scholar, takes veterans, academics, history buffs and descendants of veterans on tours that cover topics such as D-Day, In the Footsteps of Patton, the Italian Campaign in WWII, the Civil War and Lewis and Clark. Dr. Ambrose authored the best seller Band of Brothers, which became an HBO miniseries by Stephen Spielberg. It, too, has a related tour. At the conference, the keynote speakers, panelists and guests were made up of a virtual pantheon of experts in

their fields. Well-known luminaries such as TV journalist Andy Rooney, filmmaker Ken Burns and former Secretary of State Madeleine Albright were among the keynote speakers. The real heroes and “stars of the show,” however, were the men and women who were in the war themselves— those whose agony, suffering, hope, perseverance and faith in eventual victory let us win the war. To give an idea of the suffering they endured, many talked about their experiences. Dorinda Makanaonalani Nicholson was a little girl who lived in Pearl Harbor in 1941. Her father was from

Missouri, and her mother was Hawaiian. They drove their car into the ripe sugar cane fields to hide for safety.

“The Japanese planes came so close and low, we could see the goggles on the pilots,” she said. It was only one day, but after that we had martial law. She described how communications were limited and everything was censored. She augmented her talk with photos from one of her books, which included pictures of beautiful Hawaiian beaches ringed by barbed wire.

A former Japanese bomber pilot, Zenji Abe, and a Navajo code talker, Samuel Sandovel, were part of a panel of diverse veterans. Since the Navajos had no written language, their radio messages to American units completely confounded the Japanese code breakers.

Southeast Louisiana native Jack Sullivan was a prisoner of war in Germany. He was thrown into forced hard labor in Munich under deplorable conditions.

“You wouldn’t even think of feeding your dog the slop they fed us,” Sullivan said, contrasting his treatment with that of the accounts of some captured officers. Retired professor “Jarek” Piekalkiewicz was 13 when the Nazis invaded Poland in September 1939. He was from a well-to-do aristocratic family in Warsaw that eventually lost everything. Piekalkiewicz told of having to have surgery to remove wood fragments from his infected foot (caused by a bomb explosion) without anesthetic. There was none to spare. At 14, he joined the resistance and experienced bullets whizzing by his head. Attending what the Nazis deemed an illegal school, he escaped an arresting raid by jumping out a window into the arms of an SS guard.

“The guard was so surprised when I jumped out of the window, he fell over,” Professor Piekalkiewicz said. He then added, “I must have set Olympic records, I ran so fast to get away.”

By August 1944, at the age of 18, he was already a seasoned war veteran and soldier in the Polish Home Army. He took part in the Warsaw Rising, one of the great battles on the eastern front. Taken as a prisoner of war and sent to a POW camp in Germany, he escaped three times.

“I didn’t like Hitler’s cuisine,” he told the audience. “So I decided to escape.” Once was from a train with the help of a former professional burglar. “They had searched us three times before herding us in, so I don’t know how he managed to have the tools to get through the barbed wire that covered the windows of the train.”

The professor then closed the session. “The third time, I was rescued by General Patton’s Third Army … for which I will always be grateful.”

131
next Many happy returns