Drinks From Down Under

Native to China, this luscious gem made its way to the United States around 1906. However, upon arrival, farmers found the fruit’s growing needs fickle and its flowers difficult to pollinate, so it was primarily used as a decorative vine. Fruit cultivation all but ceased until the 1950s, when New Zealand took the lead in farming and world export. It was at that point that the fruit was dubbed the “kiwi,” after the bird it resembles. Soon, Europeans developed a fondness for the fruit and by 1977 Italy gained the stronghold in production. By 1981 California began serious cultivation. It now harvests the superfruit from October until April; by spring (or autumn if you are in New Zealand), the Zespri brand New Zealand crops start taking over supermarket shelves, making the kiwifruit available year-round.

The kiwifruit is the most nutrient-dense fruit of all major commercial fruits on the market today, containing twice the vitamin C as an orange, four times the vitamin K as carrots and plenty of vitamin E. Low in sodium and a good source of fiber, the kiwi has more potassium than a banana with half the calories. How’s that for diet food? Consider the high lutein concentration, with its anti-aging effects, elevated antioxidant cancer combatant properties and fat-stripping anticoagulant cardiovascular benefits and you may just have a fountain-of-youth miracle fruit.

Besides being tasty on salads and tenderizing in marinades, the kiwi packs a powerful punch in a cocktail. 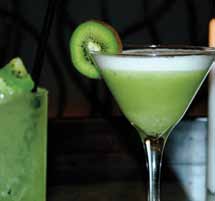 (Available at loa through February)

In a mixing glass muddle kiwifruit and add remaining ingredients. Shake a few times without ice to start the emulsification, then add ice and shake well. Strain into a chilled V-glass and garnish with a slice of green kiwi. Serve to your friends for a true wow factor.

Muddle your kiwifruit in a mixing glass, add rum, lime juice and simple syrup and stir until well combined. Fill Collins glass halfway with the crushed ice. Add your mixing glass ingredients and top the glass with the rest of the crushed ice until full. Stir to combine the nectar with the ice, add a straw and a piece of kiwi for garnish. Sip and enjoy!

To crush ice:
Place ice cubes in a Lewis bag or durable kitchen towel. Close bag or wrap towel around ice. Place bag onto sturdy surface and use a mallet, rolling pin or other similar object to bang ice until it crumbles into a flaky consistency.

96
previous Juiced Up
next Great Pubs