Home on the River

A cowboy at heart, Tom Woods has brought a Southwestern influence to his downtown apartment

The problem—and we should all have such problems—with One River Place is the breathtaking vistas: north to the Quarter, south to the bridge and west across the Mississippi. It’s hard to compete with those views. Many try, but Tom Woods, who bought his apartment some six years ago, doesn’t even bother.

He’s an easy, laid-back kind of fellow with three residences, in New Orleans, Las Vegas and Diamondhead, Mississippi. Except for sentimental treasures, anyplace he hangs his cowboy hat is home.

Though he left his native New Mexico many years ago, Woods has combined Western touches and a sense of comfort that blend easily in his riverfront apartment. A handsome pair of black leather chairs (actually the best-looking Barcaloungers I’ve every encountered) and an L-shaped butterscotch leather sofa are anchored by a vintage Sarouk carpet. On one wall hangs a heroic floor-to-ceiling painting by George Dureau titled “Dancing on Dumaine,” and on the other a 50-inch plasma television that rises with the touch of a button from within a large black console. All around the apartment are little Western gems: a Lalique bison, a Remington cowboy, a leather-bound book on animals in America.

In the dining area of the main room, a simple, round table of zebrawood is surrounded by Chinese lacquered club chairs. A North African chandelier, balanced by moving beads, hangs above. A handsome console, used as a serving area, is topped with a Japanese ceremonial sword, a gift from his father upon returning from WWII, and a large Eastlake mirror purchased from the notorious, now-shuttered Lucky Pierre’s on Bourbon Street.

Much used silver sun-bleached Gloster teak chairs grace his wraparound terrace with its long views of the city. 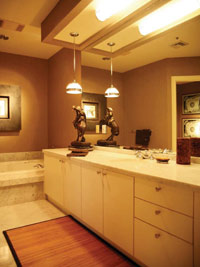 All of the public rooms have river views: A large living-dining room combination is flanked by a state-of-the art kitchen-cum-breakfast area to one side, and a room (normally used by others in the building as a dining room) converts into a guest room, via a Murphy Bed, and has a pool table slap dab in its center to the other. His bedroom toward the back has a view of the French Quarter. The private rooms, including two baths, a large dressing room and service areas, are toward the back of the apartment.

In the guest/pool room, the Murphy Bed is hidden behind painted Southwest-inspired terra-cotta-colored doors. The pool table has a flat wooden tabletop used when Woods entertains, as he was the day we visited. He was hosting a party honoring Angela Hill and Margaret Orr for their years of service in support of animal causes and particularly the Krewe of Barkus, of which Woods is captain. Barkus, that delightful parade that moves through the Quarter, past one of several bars and restaurants owned by Woods, has raised just over $1 million for animal rescue, medical attention and shelters.

Fittingly, on a console table are photos of Woods’ beloved dog JoJo, who passed away. A miniature crown worn by JoJo during her reign and other JoJo memorabilia, including costumes and scrolls from each year of Barkus, are in a long winding hallway toward the back of the apartment. Above the console in the guest/pool room is a stunning J. Stuart maritime painting from 1889, which like a sterling silver anchor candlestick in the living room, has sentimental value for Woods. 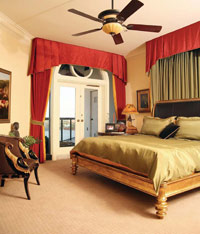 In the spacious bedroom, the mood is less Southwest and more French Quarter grandeur and Las Vegas riche. In the bedroom, decorated in soothing greens, golds and reds, sits a large writing desk and a Empire chair covered in a leopardprint fabric. Huge red pelmets hang above the doorsill and the bed. Velvet and silk are used on the bed; the doors are kept free of drapes to allow for a view; and all the carpets in the private areas are by Stark.

Just off the bedroom is a huge walk-in closet filled with bold plaid cowboy shirts, boots and hats. Woods has suits, but he says he likes his clothes as relaxed as his homes. Here’s a guy who’s as comfortable with boots up on the balcony ledge of his very grand terrace as he in his own skin.