Singer-songwriter and musician Clint Maedgen crosses musical genres with ease. Favoring swing, blues, jazz, country and rock, he writes ballads, cabaret show tunes and bluesy New Orleans–themed musical vignettes. A multi-instrumentalist (although he’ll tell you he isn’t as good as he’d like to be on any instrument), he plays found objects too. “I think it’s so much fun,” says Maedgen, “to take something that isn’t necessarily supposed to make music and make a song with it.” 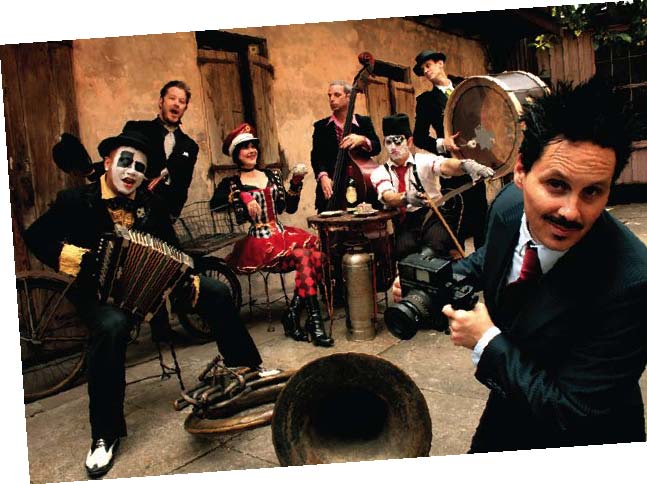 Moore, Joe Ashlar, Casey McAllister, Bru Bruser and others. But that’s not all. He plays and tours full-time with the Preservation Hall Jazz Band; promotes another new project called Clint Maedgen With Strings; practices each day to perfect his energetic One Man Show (popular with kids because of its innovative use of toys); and of course, he’s the front man and mastermind behind the musical multimedia carnival cabaret that is the New Orleans Bingo! Show.

Originally from Lafayette, Maedgen has lived in the city for the last 20 years, although these days he splits his time between Los Angeles and New Orleans. Recently, I got a peek into the creative world of Mr. Maedgen.

What are some of your influences?
I like to pull from things that have happened already that interest me the most. Maybe a little Charles Mingus, a little bit of Punch Miller’s band, throw it in a blender, mix it up and it ends up being something else.

How does your creative style meld so well with the Preservation Hall Jazz Band?
Inside traditional New Orleans jazz there’s a real dialogue going on between the instruments, and the beauty of it is in not getting into the other players’ way. My role as a tenor saxophone player is completely different than a trombone [or] clarinet player.

How many instruments do you play?
I’m primarily a singer. My main instrument is saxophone, but I like picking up different things and seeing what I can do with them. I’ve written a lot of songs on guitar; on piano; I play the coke bottle; I play ocarina; I play the kitchen chair pretty well from time to time, if necessary. My favorite thing to do is pick up an instrument and find the one thing that I can do really well on it and write a song around that. [It’s fun] to take a toy that a kid might have in his room and just change the way he thinks about it. I started playing saxophone when I was 9 and hated it. Four years later I ran into this guy who showed me the blues scale. And I’ve been practicing them ever since. So if I can run across a kid that’s got a toy and maybe he uses it for something else, but [I can say] oh, did you ever think about doing this with it? [a Tonka toy’s cartoon voice squeals “make-make-make-some noise, make-some-noise, go-go-go-go, high-high-high-high!”].

Ha-ha! I read somewhere that you found an old oversize bingo card in a junk shop and that was your inspiration for the New Orleans Bingo! Show.
It sounds made up, but it’s true. There were bingo cards stacked everywhere! I asked the lady how much for these cards? She looked at me, smoking a cigarette, and said, “Honey, I’m so damn tired of looking at these cawds, just get ’em outta here!” [I got] 855 bingo cards for 20 bucks.

I had been writing these little love songs [that] didn’t fit at all with my rock band, [at the time] Liquidrone. So I came up with the idea that I wanted to do kind of a variety show for my friends; I started making my own movies. From the very first time we [performed in the back room] at Fiorella’s, that was the formula: original songs, watch a movie, play bingo, and repeat. I want to do this off Broadway. I’m very proud of what we do.

Tell me about Clint Maedgen+9.
My favorite Miles Davis recording is with Gil Evans and the name of that record is Miles Davis+19, so that’s the inspiration for +9. It’s the most rock-pop of the things I do.

And your other project, Clint Maedgen With Strings?
A lot of love songs with string accompaniment. My good friends Helen Gillet and Daron Douglas are my band mates. There’s nothing cooler than strings. They’re just so beautiful and sound wonderful. And yes, we do weddings too!

These are all very different projects.
There are key people in my life that helped me to get to this point as far as how I look at music. When I was 16 years old, Branford Marsalis really set me straight. [He said] don’t get boxed into one category. Enjoy all music and incorporate all of it into what you do. My favorite players are ones that have a true appreciation for all kinds of music, and you hear aspects of it in their playing and songwriting. Bob Dylan’s like that; Tom Waits is like that.

Being a chameleon of sorts.
Yeah. Not being painted into any kind of corner. If I want to do a country song, I’m going to do a country song. If I want to do a waltz, I’m going to do a waltz. If I want to do something totally gutbucket, with a kitchen pan and maybe a wooden chair and a loaf of bread because for some reason we discovered that sounds cool when you smack it against the wall [then I’ll do that]. I’m really trying to get the balloon down. [Inhaling, he “plays” the balloon, a trembling squeaky timbre]. At some point I’m going to be able to play a complete song on the balloon. There are people that can do that. I’m hoping to get a lesson at some point.
You think I’m crazy.

You are crazy.
I’m becoming more and more comfortable with the fact that I’ve absolutely lost my mind. [Laughs]

Not a bad thing at all, because we are quite entertained by you.
Thank you.

“Tonight at Noon” by Charles Mingus Electric even though it’s acoustic instruments.

“Blues for Pablo” by Miles Davis with Gil Evans A tremendous recording; incredibly rich chords. Miles was the coolest guy in the universe.

“Lovesick Blues” by Hank Williams Sr. American music at its most beautiful and heartfelt.