Tucked in a corner of my wallet, in the compartment that holds loose change, is a well-worn fava bean meant to bring good luck. Eighteen years ago, my grandmother carried this same lucky bean. But according to Judge Anthony Russo, founding member of the Italian American Marching Club, the luck ran out long ago. And the best place to get a new lucky bean is at the Italian American St. Joseph’s Day Parade.

“We throw fava beans or lucky beans,” says Russo. “And they’re always very popular and it’s tradition. But they’re only good for one year of luck.”

The parade is held in honor of St. Joseph, the patron saint of Sicily. With 90 percent to 95 percent of Italian American citizens in the New Orleans area being of Sicilian descent, St. Joseph’s Day is cause for serious celebrating. Each year families create altars in their homes laden with symbolic foods and other items: cakes, cookies and cannolis, loaves of home-baked breads, traditional meats, fruits, vegetables and cheeses, flowers and candles. Anyone from New Orleans has surely seen the extravagant public altars erected around the city in churches, halls and restaurants.

“Altars are normally prepared by a family to give thanks for some favor granted,” says Russo. “We wanted to have something with more exposure than the St. Joseph altars.” 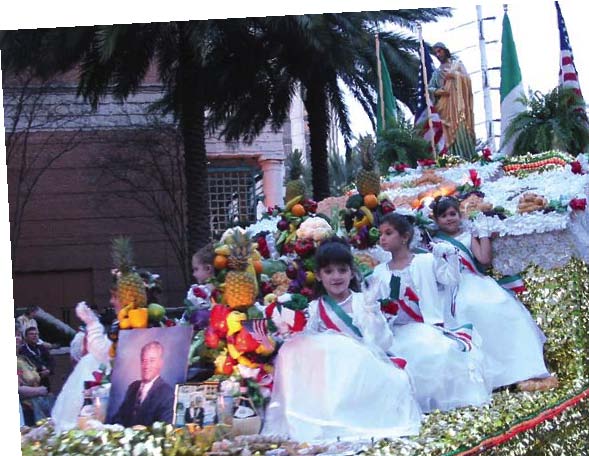 Held on the Saturday prior to St. Joseph’s Day, floats are strung with lights, decorated with Italian and American flags, and adorned with red, white and green bunting (the colors of the Italian flag). One float is decorated as a St. Joseph altar with all the traditional food items (which are donated to a charitable organization following the parade) and a title float displays the IAMC logo. The remaining floats carry 100 maids (dressed in long white gowns, with tricolored sashes, and carrying little bouquets of red, white and green carnations) and the court. This year’s grand marshal is one-time teen idol Frankie Avalon; the caesar is Dr. William Lacorte; the queen is LSU freshman Victoria Gilberti; and parade marshals (former grand marshals) are actors James Darren and Vincent Pastore of Sopranos fame. Then there’s the Godfather’s Legion with “godfathers” riding along in sleek black convertibles.

“Unlike the parades that everyone is accustomed to, we do not throw any trinkets or favors from the floats. We want everybody to see our beautiful Italian American maids rather than grope for beads. However, we have 700 members this year, and they will be clad in black tuxedos walking behind the floats. These parade marchers give out the flowers, beads and doubloons.”

For members, the festivities kick off with a grand dinner the night before. “This is Vincent Pastore’s third year. He just loves the parade, loves the city of New Orleans. And when we get him to start eating food … that’s the real reason … I’m sure he loves us, but he loves the food better.” The day of the parade begins with a pasta party complete with Italian music, wine and presentation of the court. Immediately following the parade is the gala or Muffulatta Dance held at the Hilton during which the maids are presented by their fathers and grandfathers, and guess what? Muffuletta’s are served. But the highlight is really the four-hour-long St. Joseph’s Day Parade—the part that nonmembers can and do participate in.

“Everybody celebrates St. Patrick’s Day, as they should,” says Russo. “Everybody on St. Patrick’s Day is Irish, even us Italians. On St. Joseph’s Day we’re back to our Italian roots and a lot of people, especially on the parade route, become Italian for that day to celebrate the feast of St. Joseph. And it brings attention to St. Joseph himself and he’s a pretty good guy.”

In New Orleans any event is reason to parade, but preservation of Italian American heritage is really the root of the IAMC. “We go through a lot of effort not to make it look like a Mardi Gras parade,” says Russo. All the favors have an Italian American theme and are in the Italian American colors. And of course there’s the ever-popular lucky fava bean, which is really extra special. “Prior to the parade, the priest blesses the altar float and all of our lucky beans,” says Russo. 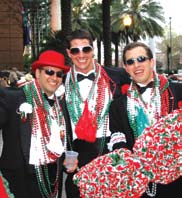 And there’s significance in handing out favors. “If we give a favor, you must return a favor,” says Russo. “That favor we’re giving you is a red, white or green carnation and the favor we expect is a kiss on the cheek. That’s just tradition. It’s the same with the Irish guys. Only our kisses are a lil’ better.”

Adds Russo, “If you watch that parade and you’re not Italian at the end of it, shame on you.”

715
previous Mrs. Big Stuff
next The Soul of the City